Gone! After a very long wait in Dakar, Senegal, Tullio Picciolini and Giammarco Sardi have “cast off their moorings” and set the bow, for now, to the southeast, then headed for Guadeloupe, Caribbean, distant 2551 nautical miles, to try to break the Dakar-Guadalupa record, held by Vittorio and Nico Malingri, aboard an uninhabitable sport cat. The time to beat is with the time of 11 days 1 hour 9 minutes and 30 seconds. TRACKING HERE.

To try the feat they purchased, and upgraded, the same boat that set the record to beat in 2017: namely Vittorio and Nico Malingri’s boat. 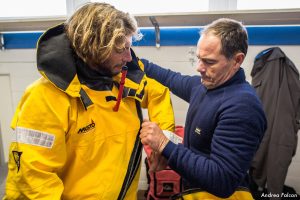 TULLIO PICCIOLINI
An airline pilot in Alitalia, he has more than 50,000 nautical miles behind him, including about 30,000 in the ocean, and for several years participated in international activity on the Formula 18 class. He made 6 ocean crossings of Atlantic and Pacific in doubles and crew. In 2011, he made the record attempt at the Atlantic crossing from Dakar to Guadeloupe on the 20-foot uninhabitable catamaran “Black Blonde” together with Matteo Miceli.

GIAMMARCO SARDI
An ocean navigator with more than 20,000 miles covered in the Mediterranean, Atlantic and Pacific, he has decades of experience on sport multihulls in doubles. After the record attempt, he will continue his campaign to prepare for the 2021 Mini Transat race, one of the most important solo ocean races on a 6.5-meter boat. 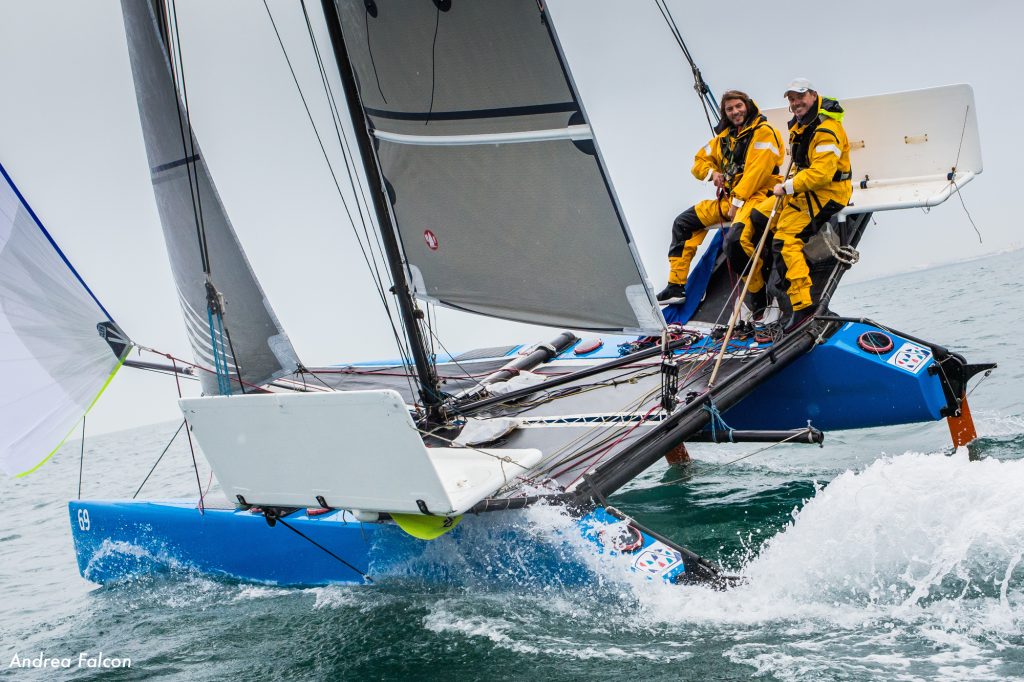 THE OCEAN CATAMARAN
The 20-foot (6-meter) ocean-going catamaran, designed especially for the record by Studio Balance Arquitectura Naval by Sito Aviles Ramos, is constructed entirely of carbon. It is a very solid, fast boat made unsinkable by its 14 watertight compartments, which during the crossing will also be used to stow 16 days’ worth of provisions and technical equipment. With this same boat Vittorio and Nico Malingri captured the Atlantic crossing record in 2017. It was checked and optimized for the new venture with the cooperation of the designer and with the support of the C-Catamarans shipyard. During the crossing from Dakar to Guadeloupe, Ocean Cat will be equipped with two Solbian AllInOne solar panels with back contact technology that allows for a strong cell yield of more than 22 percent, which consequently improves the solar panel performance needed to maintain efficient on-board instrumentation such as the compass, wind and speed sensing systems, and safety systems.

THE HISTORY OF THE DAKAR-GUADALUPA RECORD
Being the fastest in the 2,551-mile Atlantic crossing from Dakar to Guadeloupe (aboard 6-meter catamarans that were uninhabitable and unassisted), made and continues to make ocean sailors very jealous. Before Vittorio and Nico Malingri set the record in April 2017 with a time of 11 days 1 hour 9 minutes and 30 seconds, the record was held by Frenchmen Yves Moreau and Benoit Lequin who made the crossing in 2007 in 11 days, 11 hours, 25 minutes and 42 seconds. Before them the benchmark time was set by Matteo Miceli and Andrea Gancia in 2005 in 13 days, 13 hours, 58 minutes and 27 seconds. After the French record, there were two Italian attempts: the first by Miceli himself paired with Tullio Picciolini in 2011, which ended with Biondina Nera’s scuffing and dismasting. The second was attempted in 2013 by Luca Tosi and Andrea Rossi, which ended in virtually similar fashion, but in both cases the Italian crews were sailing strong, with a good lead over the French record and a good chance of setting the new record. Vittorio Malingri in 2008 set the solo record on the same course with a time of 13 days, 17 hours and 48 minutes.