This flying boat will go around the world: does it seem possible?

Jérémie Beyou is the first skipper to have launched a IMOCA 60 latest generation foiler, Charal, and his goal is the Vendée Globe 2020-2021 (nonstop round the world tour and assistance) and in order to get to the round-the-world race to the maximum, he played on a great deal of anticipation for the launching of the boat, with the goal of subjecting it to a thorough stress test that would highlight all its possible fragilities.

Charal is in fact the latest frontier of IMOCA 60, or oceanic openers participating in the Vendée Globe, the nonstop, unassisted round-the-world race. For about four years, the class IMOCA has opened its box rules (i.e., that set of rules and measurements to which designers must adhere when designing boats belonging to this class) to foils, an element that is decisively changing the aesthetics and performance of these ocean racehorses.

The firm that designed Charal, built by the French shipyard CDK, is that VPLP that had designed, together with Verdier, Hugo Boss, i.e., the most revolutionary IMOCA of the penultimate generation, as well as some of the fastest oceanic opens currently sailing. Not only that, Giullarme Verdier is recognized as one of the best performers when it comes to oceanic boats and foil design; it is no coincidence that Team New Zealand called him in for the Bermuda America’s Cup, and it appears that the Frenchman’s hand was behind the famous XXL foils broken by an edge, which were the basis of the Kiwis’ victory over Oracle. It seems clear that in current VPLP work, the influence of Verdier and more recent foil studies in general is not lacking.

A detail this definitely important, because on Charal one of the most “striking” elements is precisely that of the foils. Beyou’s IMOCA in fact mounts decidedly bulky foils, even equipped with a triple edge.

From the very first sailing images Charal showed a surprising lift, uplift effect, never before seen on similar boats, triggering prolonged phases of full foiling, total lift from the water, in transverse/lake swells in medium to strong winds. It seems clear that the design studio has focused heavily on foiling to develop the boat’s performance. A factor that in a way changes the technical characteristics of the project in an important way.

Flying in the Ocean means solving in a non-trivial way one of the most common problems faced by all boats that take on this type of racing : bow noose diving, which causes tons of water to cascade into the cockpit. While this is something very spectacular in the videos, this phenomenon is detrimental to the life aboard the skippers, the speed of the boat, and its own safety. In fact, ballasting the bow when sailing at great speed causes an abrupt collapse of speed, a braking, which causes all the thrust of the wind to insist on the mast, sails and shrouds at this juncture, causing considerable stress on the entire structure. Not surprisingly, masts have always been one of the typically fragile elements of older generation IMOCAs. 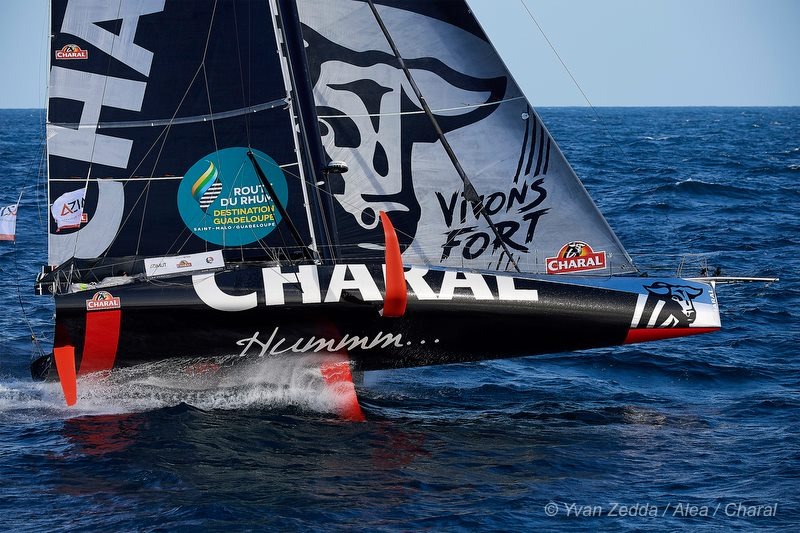 By allowing the boat to foil, the rig is significantly less affected by these sudden changes in load, provided of course that the foiling is sufficiently stable and does not break off with abrupt dips in the water. And this is where the VPLP study seems to have done the most work, namely on developing foils that will ensure stable and long-lasting flight. How? First, on the tonnage of the foils. Charal’s is definitely important, as was already that of Alex Thomson’s Hugo Boss, which in fact was among the IMOCAs at the last Vendée the one that seemed to trigger lift phases closest to true foiling. Larger and bulkier foils actually provide from a dynamic point of view more stability in lifting, although they have drawbacks. In light winds they obviously offer greater hydrodynamic drag, and in general such a bulky appendage is a bit “slower” in lifting the boat, i.e., it needs to “rev up,” increase speed, to manifest its effect, which a leaner drift does sooner and more easily. Once in the air, however, the wider appendage provides more stable support. From the perspective of boats that do not do stick racing but very long ocean edges, not changing tack therefore with great frequency, this can obviously be an advantage.
Then there is this triple edge that is conspicuous. It is obvious that only the design studio knows specifically the reasons for such a choice, but it is plausible to think that they have come to the conclusion that a broken surface offers greater dynamic support than a flat foil, thus returning to the previous point: more vertical thrust, flight with greater stability, more speed.
But beware, a boat with such vertical thrust, while unloading mast and sails from a certain type of stress, imposes other critical issues from a construction and design point of view. The foil attachments, then the hull and reinforcements around the area where the appendages work, obviously experience very important stresses since they actually support the entire weight of the boat, about 8 tons (which for a 60′ is very little), when it is in flight. Then there is the problem of descent, even accidental descent, from the foils.

3 – A generous bow and deck flaring.

The higher the flight, the faster the boat, the more disastrous any unintentional descent in terms of bow-tie entanglement. And here it is in fact Charal, even more than Hugo Boss, which already exaggerated this aspect, shows extremely powerful lower bow volumes. Looking at the boat from the bow, everything can be said except that it has sharp volumes, but rather they are extremely round, almost a small “scow” (the completely round bow seen on some Mini 650 prototypes). What is it for? To provide strong opposition to the boat’s gaveling. A thin bow would go down like a blade through butter coming down the foils, one designed like this offers the boat’s descent into the water a viable and dynamic opposition. And here Charal can then accidentally descend from the foils, touch the water but come back up again without the effects of entanglement being particularly destructive.

If that were not enough, another of Hugo Boss’s distinctive elements appears accentuated: The flaring of the bridge. The reasons are strictly aerodynamic: a flared surface offers less vertical drag, compared to a strictly horizontal deck, when the boat rises in the air, and when launched it has a profile that better cuts through the air while also reducing turbulence in the lower part of the headsails. Obviously if this boat did not fly such a bridge would offer less protection from the water, but the ultimate goal is precisely to lift it.
Will the goal be achieved? Will Charal be a reliable long-distance IMOCA? We will find out soon, at present it is not yet. But there is one thing that is definitely in favor of Jérémie Beyou and his boat: time. The Vendée Globe, the French skipper’s real sporting goal, is in two years. Charal is the first boat launched of the new IMOCAs and will therefore be the one that arrives at the round-the-world race with more miles under the keel and a better break-in. The answers won’t be long in coming; Alex Thomson has commissioned the same studio for his new Hugo Boss. One thing is certain: we will soon see some good things, because the new generation of IMOCA 60 has just been born, and more answers are coming soon.