The mystery of the missing trimaran: what really happened to Ad Maiora 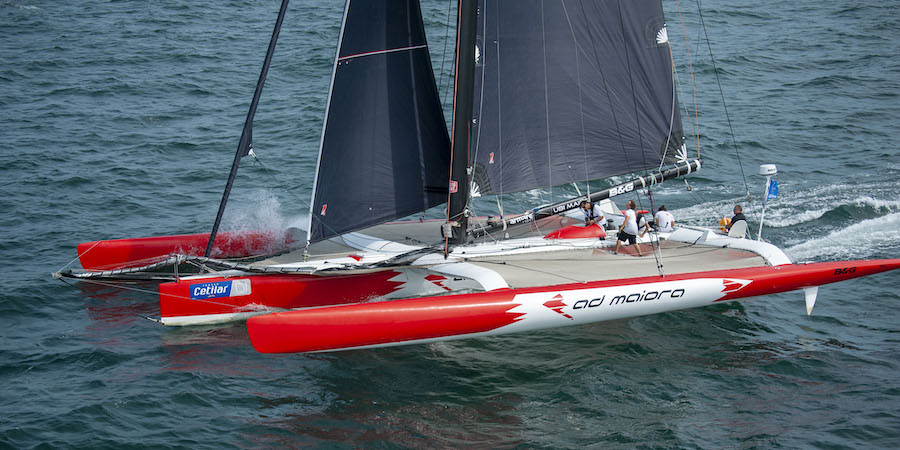 Do you remember the story of Bruno Cardile and his trimaran ORMA 60 “Ad Maiora”? In the past few days, there have been a lot of articles coming out confusingly reporting parts of the event that featured him. So we decided to call him to let him tell us once and for all what really happened off the coast of Lampedusa on Oct. 22, but more importantly to understand how a 60-foot trimaran could disappear into thin air during the Mediterranean’s most important regatta.

But let’s start from the beginning. It is October 19 and from Valletta, Malta, the Rolex Middle Sea Race gets under way. Bruno Cardile aboard his multihull the ORMA 60 “Ad Maiora,” crosses the starting line at 11:14 a.m. With him on board are Attilio Miccichè (watch leader, helm, trimmer), Gertjan Andel (bowman, trimmer), Matteo Lureschi (trimmer), Fabrizio Volpi (mast).

The first days of the regatta will prove to all participants, characterized by low pressure and absolutely favorable sea weather conditions. But the passage of Favignana will be the one after which the situation will begin to change. Tight angle to the wind and pressure between 35 and 45 knots are the ingredients of the scenario that boats and racers will face in the stretch between the Sicilian islet and Lampedusa. It is at this stretch that the problems begin for “Ad Maiora.”

October 22, 3:00 pm.
Cardile, on shift change, was informed by his mate at the helm, Attilio Micciché, of the failure he had found in the port hull.

Because of the wrapping, however, the extent of the damage cannot immediately be quantified, but after a few minutes, spent cross-referencing the weather data with the course for the buoy, the tack is abruptly called to relieve the boat’s port hull of the rigging load.

A short time passes and the wrapping also gives way, showing in full what the situation really is. As per the video below, the left hull is shown ripped open, just at the level of the heaths, by a deep crack that becomes more and more critical as time passes.

The skipper, after careful evaluations that saw the most complete safety of his crew as the only priority, decided to launch the “Mayday” and activate the DSC.

6 p.m.
Cardile is the last to leave Ad Maiora to throw himself into the water and later board the CP319 unit of the Lampedusa Coast Guard.

He and his crew, are thus taken to Lampedusa where they will wait until sea weather conditions prove favorable for the vessel’s recovery.

Now is the time to clarify some technical points of the affair, without knowledge of which it would be complicated to fully understand the events to follow.

At the launch of the Mayday, the owner of Ad Maiora pondered the possibility of bad faith on the part of some hypothetical “smart-ass” who might, once adrift, have boarded the multihull and thus claimed the right to salvage the craft. Because of this justified fear, Cardile shortly before disembarking turned on his personal PLB and then left it partially hidden on board the boat.

Once ashore, the skipper made contact with the regatta organization to have the public domain obscure what Ad Maiora’s position was. At this point the boat disappeared from possible prying eyes, but not from those of its owner. Through a confidential link Cardile could track Ad Maiora’s drift on Yellow Brick’s Traking, while with Rome’s SAR, through the Lampedusa Coast Guard he also kept track of his PLB.

Days go by and the sea shows no sign of abating, in fact it increases. Cardile remains in Lampedusa awaiting the propitious time for recovery.

The Yellow Brick, for the inexperienced, is a small yellow and black box at the base of which is a red button. In all likelihood, those who are not fully familiar with the functionality of this device may mistakenly think that this button may be used for turning off the satellite signal. As you can imagine, however, the resulting action upon pressing that button is not to turn off the electronic device but rather to send an instant alarm signal.
Subsequent analysis shows that from the first HPA (Hight Priority Alert) recorded at 14:32 UTC, there followed quite a few other 5 alerts, the last one at 15:40 UTC.

In the meantime, just a few minutes after the first report, the signal sent by the YB began to indicate navigation with a heading between 71 and 80 degrees compass and an increase in speed to about 8 knots steady.

Three, at this point, are possible hypotheses. The first is the one that sees movement at the hands of third parties in the trimaran. Hard to think about it though, since the conditions in which Ad Maiora is located would have allowed it to struggle forward at such a high speed through the use of the engine with which it is equipped or under sail. Thus the towing hypothesis can be assumed. But even here, we think the left hull, already severely damaged, would not be able to withstand such intense stress and probably breaking would lack support for the mast, which, 30 meters high, without support would fall ruinously.

Thus, a more likely conclusion is reached. More plausible, in fact, is that the “looters,” once they had disassembled the valuable electronic equipment, boarded it on a second vehicle to take it ashore and, en route, tried to turn off the YB, thus sounding the alarm signals and leaving the hull, now devoid of the electronic equipment, adrift again.

After that, past 15:40 UTC, communications from Ad Maiora’s onboard instrumentation disappeared into thin air. No more signal comes from the Yellow Brick let alone the AIS and personal PLB left on the multihull at the time of disembarkation.

Certain then that someone had boarded Ad Maiora, Cardile rushed to Malta to intercept the vessel, which by estimated route would be pointing toward Gozo and, assuming it was indeed Ad Maiora that had moved according to YB data, arrange for its recovery.

28 Oct
First Flight: Cardile, for the first time, flies over the waters of Gozo, Malta and Lampedusa, but the expedition will bear no fruit.

At 8:00 a.m., however, Matteo Luraschi called the owner and told him some rather strange news. Through an app on his phone, in fact, Luraschi would briefly intercept Ad Maiora’s AIS signal. Up to here nothing strange you will say, but what puzzles the skipper is the news of the signal emission zone. According to Luraschi, AIS, before abruptly resigning, would invite his location from a boating showroom in the Netherlands (La Balise).
Easy to think, then, that the theory of looting suffered by the stranded trimaran adrift was the correct one. Cardile does not give up, however, and so the search for the boat continues.

29 Oct
Adverse weather causes do not allow the Cessnas to get up in the air to continue reconnaissance.

30 Oct
The plane delegated by Cardile to search for Ad Maiora takes flight again, this time without him, to increase the vehicle’s range and thus the inspection area. He then starts from the last point at which the trimaran had drifted and then conducts the search along the entire possible route estimated by the skipper, who, throughout the reconnaissance phase, kept in constant contact with the pilot via automatic tracking on his Thuraya satellite, carried in the air by the pilot.

From Oct. 30 to the present, Ad Maiora’s owner has continued the search for his boat, but with no positive response and no support from the race committee, which has pointed Cardile himself to the phone number of a local fisherman.

“Three then are the options,” the skipper tells us. “The boat has 16 watertight compartments only one of which was damaged, as you saw. Difficult therefore, but not impossible, that it sank. Another possibility I think is that as a result of the speed, either its own or the towing of 8 knots, the port hull definitely split into two sections causing it to dismast or capsize at 180 degrees so that it would be very difficult to locate at sea. Last but no less likely is the theft thesis.”

In recent days, many have attacked the Italian skipper on social media, as has been happening all too often lately. The objections made to Cardile mostly revolve around pontificating varied judgments regarding the actions taken by the commander consecutive to the breakdown. Cardile replied, “If I went back, I would not change anything I did. I am convinced that the total safety of my crew was and must always be considered the top priority in any critical situation such as the one we faced. I would rather, as a commander, be criticized for launching the Mayday than have to justify myself in the face of much greater misfortunes. If I have to put my boat back to be sure of the full safety of every person who was in my charge, so be it. That’s what a commander should do.” He wryly concludes, “The only thing I would change if I went back? Well, maybe before landing, I would ask the many experts on Facebook for their opinion!”

EDIT – This morning (Nov. 9) Bruno Cardile took a flight to Lampedusa: we will keep you updated on the story.

THE TRIMARAN AD MAIORA
Ad Maiora, is the legendary 20-meter trimaran of the ORMA 60 class, launched in 1988 under the name Fleury Michon IX. She began her “new life” in 2018 after a full refitting by Cardile, who managed to bring back into the loop a mythical boat once owned by French sailing greats: the unforgettable Florence Arthaud and Philippe Poupon. In 2019 the trimaran won the Brindisi-Corfu in royalty. 19.80 m long and 14.80 m wide, Ad Maiora fishing 2.50 m.