Some time ago in the editorial office, while we were researching a modern daysailer with a “wishbone” rig (the double boom used to maneuver the mainsail on sailboards), it turned out that this solution was first applied by a gentleman named Herreshoff. Only a few days earlier, in making a report on the evolution of boats, we had discovered that the first sport racing catamaran was dated 1876 and also bore the signature of Nathanael Greene Herreshoff (1848-1938). To make a long story short, “Captain Nat” (as he was known to his friends), who went down in history for winning the America’s Cup five times with the yachts he designed, was the most influential designer in the boating world. The “Wizard of Bristol” (another of his nicknames) made it all up. Many of the solutions born of his genius are still used today on the most modern production (and other) boats. 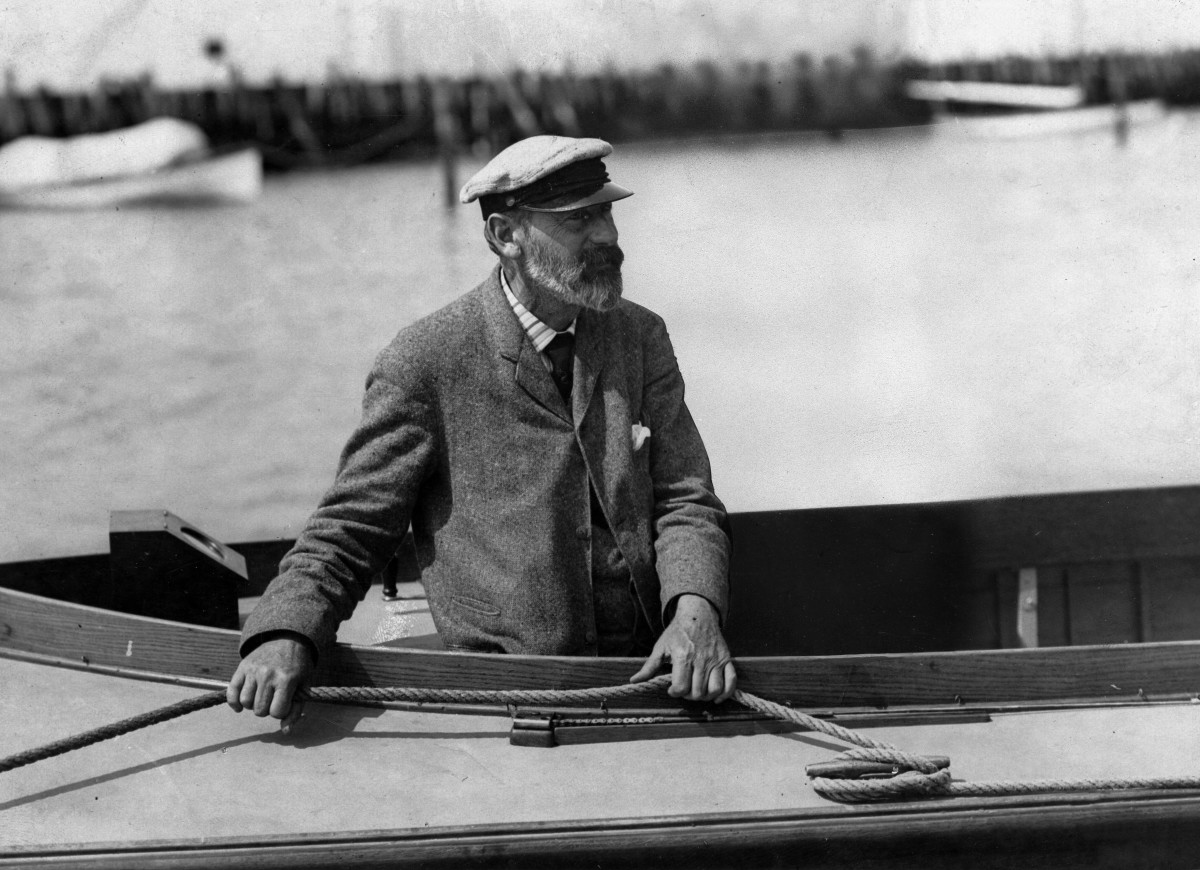 Allow us to attach an additional nickname to him: the Leonardo da Vinci of sailing. With the Florentine master he shares, in addition to the ability to be ahead of his time and experiment, an uncommon volcanicity: he left us more than 18,000 plates including plans, sketches and drawings. Born in 1848 in Boston, graduated in 1870 with a degree in mechanical engineering from the prestigious MIT (Massachusetts Institute of Technology): from a very young age he designed boats (his first at 16), in ’76 he amazed everyone with the aforementioned catamaran, Amaryllis. In fact, he showed up at the Centennial Regatta in New York at the helm of the 25-foot boat, and at the first race he lapped the entire fleet of monohulls (but was disqualified following protests from competitors). He initially worked for a company in Providence, Rhode Island, that manufactured steam engines. Apparently in 1888 an accident in a boiler during a sea test cost him his job (again, the parallels with Da Vinci’s “bungling” side are obvious). This was to be his greatest good fortune. Nat, who moved to Bristol and founded Herreshoff Manufacturing Co. together with his brother, began to work professionally in power and sailboat design. He quickly gained notoriety in the industry for the beauty and speed of his yachts, eventually being hired by the magnates of the legendary New York Yacht Club.

To fully understand Herreshoff’s greatness we must necessarily review his inventions. He took his first big “step” between 1891 and ’92, when he designed three then hyper futuristic boats, Gloriana, Dilemma and Alpha. Gloriana (21.40 m) was, in fact, the first regatta boat of modern conception: while up to that time there was no perceived difference between a racing yacht and a cruising yacht (heavy, luxurious interior furnishings with a “homey” look), the Herreshoff-designed boat had a basic interior, a steel structure and a very low center of gravity, with 60 percent of the weight concentrated in the short keel. With Dilemma (11.38 m) the designer experimented with the thin fin keel with torpedo bulb (sic!), extolling, the first to succeed, its full potential. For Alpha, he invented a movable drift system (a solution that already existed for boats that had to navigate shallow water) and little ballast, using the weight of the crew as ballast.

THE SENSE OF “CAPTAIN NAT” FOR THE AMERICA CUP

His genius did not go unnoticed: in 1892 the New York Yacht Club entrusted him with the delicate task of designing a boat to defend the America’s Cup. Herreshoff launched the Vigilant (steel dead work and bronze alloy keel), with which he first easily won U.S. selections (beating off competition from the boats of Paine and Burgess, the great designers of the day), then successfully defended the “old jug” against the British in 1893. From here, began the heyday of the Bristol Wizard, whose yachts would win five more America’s Cups through 1920: Defender, in 1895 (first aluminum hull in Cup history), Columbia (1899 and 1901), Reliance (1903) and Resolute (1920). Not to mention that the winners of the 1930 (Enterprise) and ’34 (Rainbow) editions, while not designed by Captain Nat, also came out of Herreshoff shipyards.

COMPENSATION REGATTAS? “BLAME” OF THE MAGICIAN OF BRISTOL

One of the most extreme (and influential) boats in history was indeed Reliance: 27.4 meters long at the waterline and 43.5 overall, measured from the tip of the bowsprit to the end of the boom it was 60 meters long: when heeled, the dead work turned into the waterline making it much more performant. The out-of-the-ordinary characteristics of this boat, which frighteningly exceeded, in concept, the old Cup construction rules, prompted the adoption of a new compensation system, developed by Herreshoff himself. The so-called Universal Compensation Rule, which remained in vogue until 1952 and was considered, in fact, the first modern and reliable handicapping formula. It was based on a comparison of a boat’s dimensions (relative to key variables) with those of a “virtual” model, included displacement as one of the factors, and divided yachts into classes (just like today!), by virtue of the rating assigned to each boat.

HERRESHOFF AND THE MONOTYPES

Although an inventor of compensation systems, Herreshoff certainly did not disdain monotype or classes governed by a rigid box-rule: from 1919 to ’41, 95 S-Class monotype boats were launched: of these fun, fast hulls (8.38 m), 75 examples still sail on American shores. Numbers from J/70, Mumm 30 and Melges 24! Also great was the success of the New York 30 commissioned from Herreshoff by the NYYC owners in 1905: 18 examples were built. One of them is still starring in Panerai regatta circuits today and winning frequently. It is Patrizio Bertelli’s Linnet.

But as we said at the beginning, in addition to boats it was the solutions pioneered by the Leonardo Da Vinci of sailing that made him immortal. Returning to the Reliance, suffice it to say that it was the first boat to have the very modern solution of below-deck winches. He then developed a scientific system for calculating the sizing of a boat’s structures (framework, planking, masts) at a time when most designers relied on traditional, empirical rules to determine them: this allowed him to be the first to use lightweight masts made of metal rather than wood. You should also know that if you hoist the mainsail with comfort today, thanks to the garrocci that go into the channel, you owe it to him, who invented this system to replace the traditional “canestrelli.” He then devised the cutting of sail cloth into strips perpendicular to the leech (cross-cut sail, they are still used now!): at the time, on the Gloriana, he did this mainly to counteract the tendency of cotton cloth to warp under load. Not to mention the first folding-blade propellers, the modern winch, the idea of attaching shrouds and stays to the mast by means of metal tongues, the invention of the rigging as we understand it today, the woven wire for shrouds. There is no deck equipment that Herreshoff has not, for the most part, helped to innovate and make more comfortable. If you happen to be passing through Bristol (Rhode Island), stop by the Herreshoff Marine Museum-you will step into the mind of the man who invented modern sailing.