What if you want to navigate in the footsteps of famous people?

Often the myth of a place is created by the caliber of the person who tells about it and has experienced it. Set sail with us on a two-part journey to destinations frequented by great men. Writers, musicians, captains of industry, brilliant scientists: everyone had a place of the heart to navigate. Waiting for you.

SIMON LE BON – BEWITCHED BY THE WATERS OF ANTIGUA
Do you remember the video clip for Rio, Duran Duran’s 1982 hit? Simon Le Bon and the band were aboard Eilean, a splendid 1930s ketch, off the coast of Antigua. From then on, Le Bon’s passion for the Caribbean island of the Lesser Antilles blossomed.

A sailor since the age of 10, the singer returns as soon as he can to Antigua: especially at the Antigua Classic Yacht Regatta, one of the flagships of the Panerai Circuit. And it is not uncommon to catch him right at the helm of Eilean. In the Caribbean Le Bon has found his ideal sailing habitat: in the emerald waters of Dickenson Bay, Pigeon Point and Half-Moon Bay he relaxes. They are so different from the rushing Atlantic off the coast of Ireland, where the British singer capsized resoundingly in 1985 while competing in the legendary Fastnet Race with his 78-foot Drum (Ron Holland’s design for the 1985/86 Whitbread, closed by Le Bon in third place overall).

ALBERT EINSTEIN – THE “LAZY MAN” OF DEEP CREEK LAKE
A genius of Albert Einstein’s caliber could not have failed to love sailing, a sport where the brain is of great importance. And indeed here he is, during his stay in Western Maryland on Deep Creek Lake (this was 1946) aboard the small drift boat of Harry Muma, the president of the local Turkey Neck Yacht Club.

Einstein had elected sailing as his favorite activity because it was the one that required, according to him, the “least expenditure of energy.” A lazy person, then. Not surprisingly, he chose the placid waters of the small U.S. lake, where the wind never blows too hard. And where he could feel safe without wearing a life jacket (yeah, because the luminary couldn’t swim). People who stayed close to him during that American period (Einstein was being treated by a doctor because of an abdominal aneurysm) recall that Albert often disappeared. Everyone ended up worrying until they spotted him, happy, carefree and lonely, on the small drift in the middle of the lake.

DAVID MAYER DE ROTHSCHILD – THE BILLIONAIRE WHO WANTS TO SAVE THE PACIFIC
The 37-year-old scion of the famous De Rothschild dynasty has found himself a staunch defender of the health of the oceans, especially his beloved Pacific. To the point of making a catamaran out of 12,500 plastic bottles and setting off on the crossing from San Francisco to Sydney. 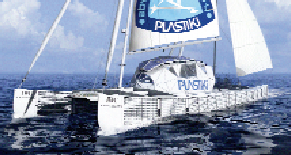 The undertaking of the Plastiki (this is the name of the boat in honor of the Kontiki, the “raft” with which Thor Heyerdahl made the Pacific crossing in 1947), completed in 2010, served to raise awareness of the so-called Pacific Trash Vortex, an island without trees plants or life, made only of plastic waste that has accumulated since the 1950s and covers an estimated area of at least one million square kilometers in the equatorial Pacific calms halfway between Hawaii and the coast of North America.

PATRIZIO BERTELLI – MAREMMA, WHAT BAYS!
If Patrizio Bertelli’s name is unquestionably linked to those of Luna Rossa and the America’s Cup, the same cannot be said of his sailing heart. That one is rooted in his beloved Maremma, where Miuccia Prada’s spouse took his first sailing steps under the aegis of his friend Vasco Donnini and where he sails his 105-foot cutter Ulisse (designed by Gérman Frers) or the 12 m S.I. Nyala as soon as he can. 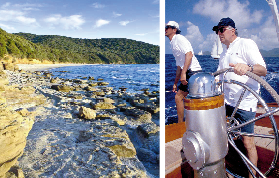 And how can you blame them? Check out the spectacle of Cala Violina, which opens in the heart of the Bandite di Scarlino Nature Reserve. A curiosity: the peculiarity that makes this small bay beloved by Bertelli unique consists of the sounds that the beach emits when it is trodden on by those who cross it (hence the name “Violina,” in the absence of any major sound sources; this effect is especially noticeable in the off-season, when the beach is not crowded…

JOHN LENNON – THE CREATIVE SAP FOUND IN BERMUDA
Few people know about the secret passion of John Lennon, the celebrated lead singer of the Beatles (first) and flag bearer of world pacifism. And the story of his 700-mile sail from the United States to Bermuda, a paradise where Lennon went in June 1980 to rediscover his creative vein. The photo above shows him, right in Bermuda, with his son Sean. 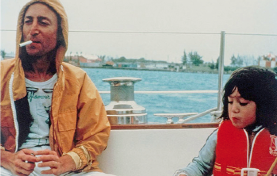 Lennon’s pall for sailing came out on Long Island, where he lived in a house by the sea with Yoko Ono. He also bought a small dinghy at a local boatyard from a Mr. Tyler Coneys, who taught him how to sail and who was then responsible for finding the boat on which Lennon set off for Bermuda. John stayed in this paradise for two months (in particular, he fell in love with Fairyland Creek), started composing again but unfortunately could not enjoy the fruits of his labor because he was killed on December 8 of the same year.

CHARLES DARWIN – FIGURED IT ALL OUT THANKS TO THE GALAPAGOS
The Galapagos Islands are linked to the name of Charles Darwin, who arrived there as a 22-year-old on September 15, 1835 aboard the brig Beagle and stayed until October 20 of that year. He visited the islands of San Cristobal, Santiago, Floreana et Isabela, where he made the observations that led him to formulate his famous Theory of Evolution. Judging from the descriptions of the local fauna and flora made by Darwin in his “A Naturalist’s Journey Around the World,” we infer that the famous naturalist had found his own personal paradise.

At the time, the Ecuadorian archipelago was virtually untouched; today, things have changed, but the biodiversity that animates these islands still astounds: only here can you see incredible animals. And we’re not talking about the “usual” giant tortoises, but lava lizards, blue-footed gannets, Galapagos penguins, and the majestic (perhaps a bit creepy) marine iguana!