What does your boat look like? Step by step, let’s see how your beloved is born in the pipeline 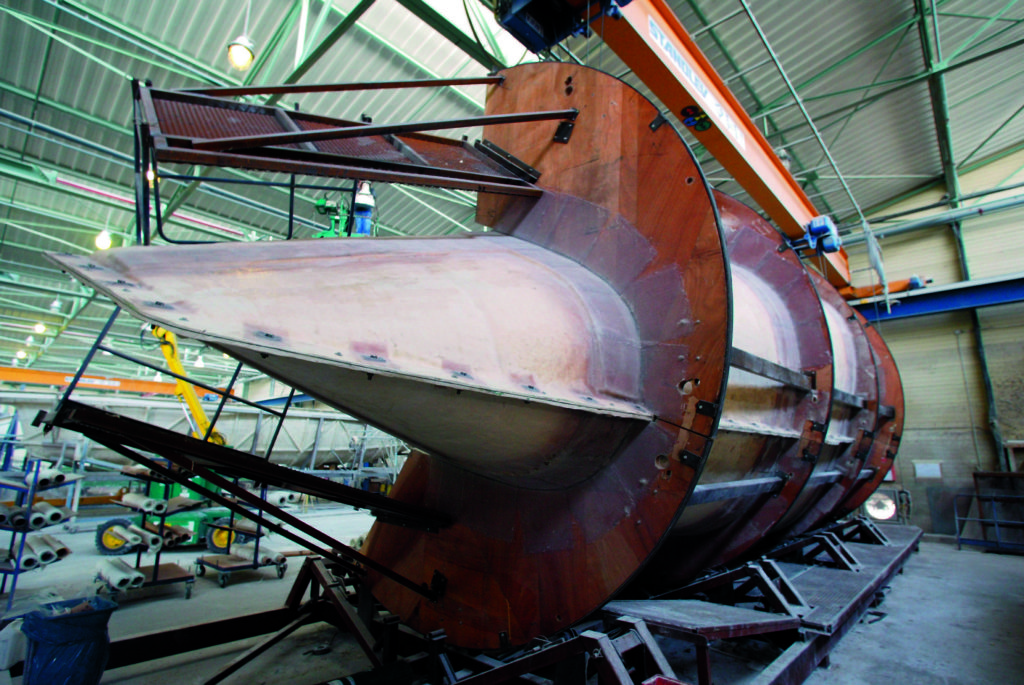 Resting on wings that allow it to rotate 180 degrees, thus facilitating access to the laminators, the female mold shown in the photo is reminiscent of a Jurassic monster. Instead, it is from this strange object that a fiberglass boat takes shape. To get to this step, that is, to get the matrix from which a hull shell will be born, there has already been a lot of work. First, the type of boat that the market requires was identified, and based on those inputs, the designer produced the executive design using new 3D software with which shapes are shaped and their performance evaluated. After that drawing is used to make the model, a mock hull that used to be made of wood and now, with the new technologies of numerically controlled milling, is made of Styrofoam or other synthetic foams. This mock hull is then coated with fiberglass, the coating is separated, and the female mold is obtained, the concave shape of which will serve as a matrix for making all the same hulls. As can be seen from the photo, the mold is also stiffened by steel bars to prevent deformation during resin catalysis. And it consists of two half-shells held together by bolted counterflanges. This allows the mold to be opened and the hull shell to be easily removed once lamination is complete. 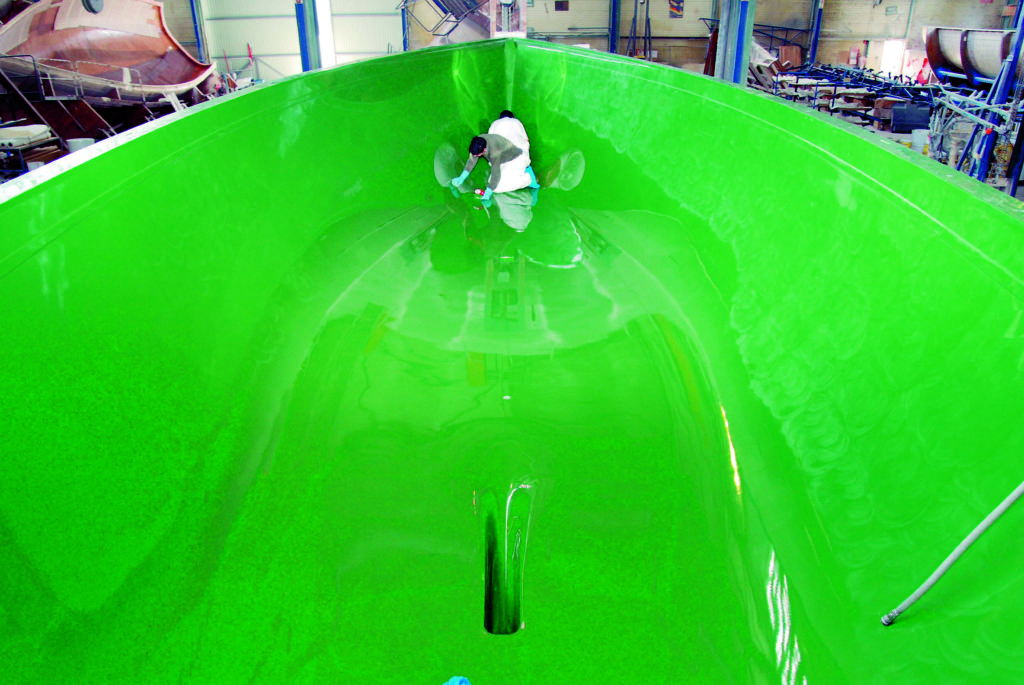 1. THE INITIAL PHASE
Construction begins with cleaning the mold of previous body slag and dust, the enemy of good lamination. Then the release material is applied, as shown in the full-page photo. This is a special wax that allows the body to be detached from the mold when the lamination is finished.

On more modern construction sites, gelcoat is applied by spraying with automated machinery so as to achieve a uniform thickness over the entire surface. In addition to aesthetic functions, gelcoat waterproofs the laminate by retarding osmosis formation. Therefore, the neopentyl type, which is characterized by high resistance to hydrolysis and UV radiation, is preferred. But the resin used in lamination also affects osmosis protection: low for orthophthalic polyester, higher for isophthalic polyester, excellent for vinylester with which some impregnate the outer layers of the hull. Others adopt epoxy instead, which in addition to better mechanical properties has the highest degree of waterproofing.

Vinylester and epoxy have another advantage: their strong adhesive power avoids the use of mat (a “felt” with chopped glass fibers and thus poor mechanical qualities), which conversely, with polyester resins, must be applied between fabrics to optimize bonding. For the same strength, laminate without mat is lighter. Regarding fabrics, many use glass biaxials or multiaxials (fibers are arranged in two or more orientations) of high grammage. In this way, the desired thickness is achieved with just a few layers.

Others apply more layers but of lower grammage, sometimes composed of unidirectional fabrics, that is, with the fibers arranged in only one direction, which is the direction of loading. This results in higher production costs but offers better quality. Keep in mind that the strength of a laminate depends on the amount of fiber, not resin.

And this is one of the reasons why many construction sites are switching to the infusion technique. Through this method, which was actually created to limit the emission of toxic substances during lamination, we arrive at 35 percent resin and 65 percent fiber. Unattainable percentages with manual lamination, where it is already a lot to get 50% resin and 50% fiber.

2. THE SANDWICH.
Some yards adopt single-skin lamination (also called full laminate), which is a series of fiber layers impregnated with resin to form a thick layer. Others use sandwich lamination instead, where a lightweight core is sandwiched between two thin skins of fiberglass and resin (two thin solid laminates), which can be balsa or closed-cell Pvc foam (Termanto, Airex, etc.).

The sandwich technique, in theory, offers the greatest advantages: the laminate is in fact much lighter, more rigid to bending and finally more insulating both thermally (less condensation formation) and acoustically. Only one limitation remains, which is the possible delamination (detachment) of the core from the outer skin. Almost all yards now glue the core using the vacuum bag technique.

Basically, a plastic sheet equipped with nozzles (as for infusion) is applied to the core panels that have meanwhile been glued with special adhesives to the outer skin; before the adhesive “pulls,” air is sucked into the sheet via a pump connected to the nozzles. This pressure, which reaches 0.9 bar, compresses the cloth on the sandwich core ensuring better adhesion to the outer skin. This technique is an essential pre-condition for limiting the risks of delamination. Another precaution taken on most boats with sandwich hulls is to make the living work (which is the area where the greatest stresses are concentrated) of solid laminate, limiting the sandwich to the sides only.

If for the hull there are yards that prefer traditional techniques, for the deck there is a gradual homologation of construction standards. With rare exceptions, all are adopting sandwich, and the reasons are the same as those expressed in the preceding pages.

Imagine if on deck it is not important to save weight (which translates into an even more noticeable lowering of the center of gravity, as you lighten the highest part of the boat), or to increase insulation to have less heat or less cold inside, as well as a dampened noise.

The differences then come down to the type of core used, balsa or Pvc, and sandwich lamination techniques. Let’s start with the first one: balsa has a higher specific gravity and absorbs more resin, so it is less light than Pvc, but precisely because of the higher resin it absorbs it provides stronger bonding with the skins. In addition, its compressive strength is higher because its fibers are perpendicular to the panel.

Pvc, for its part, being closed-cell absorbs less water in the event of skin fracture. Of the two materials, most yards prefer balsa. Now the new techniques. In addition to vacuum bagging and infusion, which we have already discussed, injection is gaining ground.

Imagine two molds, one male and one female perfectly matching: once the gelcoat has been sprayed on both molds, the fabrics and dry sandwich core are placed on the male mold (without resin as is done in infusion), the female mold is overlaid, sealed, and the resin is injected inside. In addition to the advantages mentioned above, the deck is also gelcoat finished on its inner face. Thus the counter-molded ceiling is not applied, gaining lightness and height below deck.

4. THE STRUCTURE.
Much of the production shipyards use as their framework the counter-mold that incorporates stringers and spars, mast base, engine mount, and sometimes the mooring structure and furniture base. The counter mold is made off-site by laminating a separate mold, and then it is glued to the body and patched with strips of fiberglass fabric and resin in the areas most subject to stress.

This technique now proven by thousands of seaworthy hulls (it was already being done in the days of the Arpege) has been improved over time due to greater precision in the making of the counter-mold (it is due to numerically controlled machinery) and consequently more precise couplings with the body.

In addition, the new adhesives have significantly higher tensile strength than those of yesteryear, thus being able to compensate for even thick gaps between the shell and the counter mold, which used to be a problem because they did not make the two units work synergistically.

Alternatives to the counter mold are resined framework directly on the bottom of the body (the stringers and side members are made of Pvc pieces fiberglassed on the body) which, in addition to the advantage of forming a single body with the shell, is also lighter; or the galvanized steel cage (photo above right), a structure that offers high stiffness while not using exotic and expensive fibers such as carbon. A weak point of this solution may be the eventual collision of the bulb against a shoal: in fact, repair involves interventions that sometimes prove to be very laborious.

5. THE FINAL STAGE.
As the side photo illustrates, the deck of a production boat is assembled to the hull with the interior and most of the systems nearly completed.

This solution involves careful verification of the assembly of the bulkier components, with a view to removing them for possible repairs; but also perfect positioning of the bulkheads, which must fit over the seats cut in the deck counter-mold. Therefore, it is essential that bulkheads be cut with the utmost precision.

Structural adhesive is injected inside these seats to bond the bulkheads to the deck. The same adhesive (or silicone sealant) is distributed along the perimeter flange of the hull, and the joint with the deck is completed with Parker screws or through-bolts that head on a metal counterplate located under the flange.

Some prefer to fiberglass the joint from the inside, which is a more labor-intensive system but provides greater rigidity and waterproofing of the contact area over time. Last operation is the assembly of the bulb: the boat is raised and the bulb, complete with its cage holding it vertical, transferred under it.

The holes on the hull for the studs are drilled using a template, silicone adhesive (Sika type) is applied in the joint between hull and bulb. Then the stud nuts are tightened with the torque wrench according to the torques provided by the designer. After tank testing of all systems, the boat is finally ready for delivery. 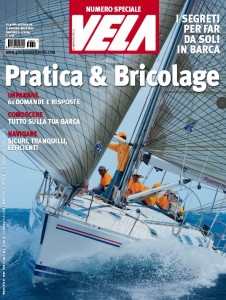 This little “bible” of boat building, and many other useful tips, can be found in the special issue of Sailing devoted to Practice and DIY: a volume, this special one, designed to keep on hand, at home and on the boat, to take away doubts or brush up on your knowledge at any time. Divided into three major sections (Know, Navigate and Learn), YOU CAN BUY IT HERE.