Weather: what you need to know to navigate safely. Do you know how to interpret synoptic charts? 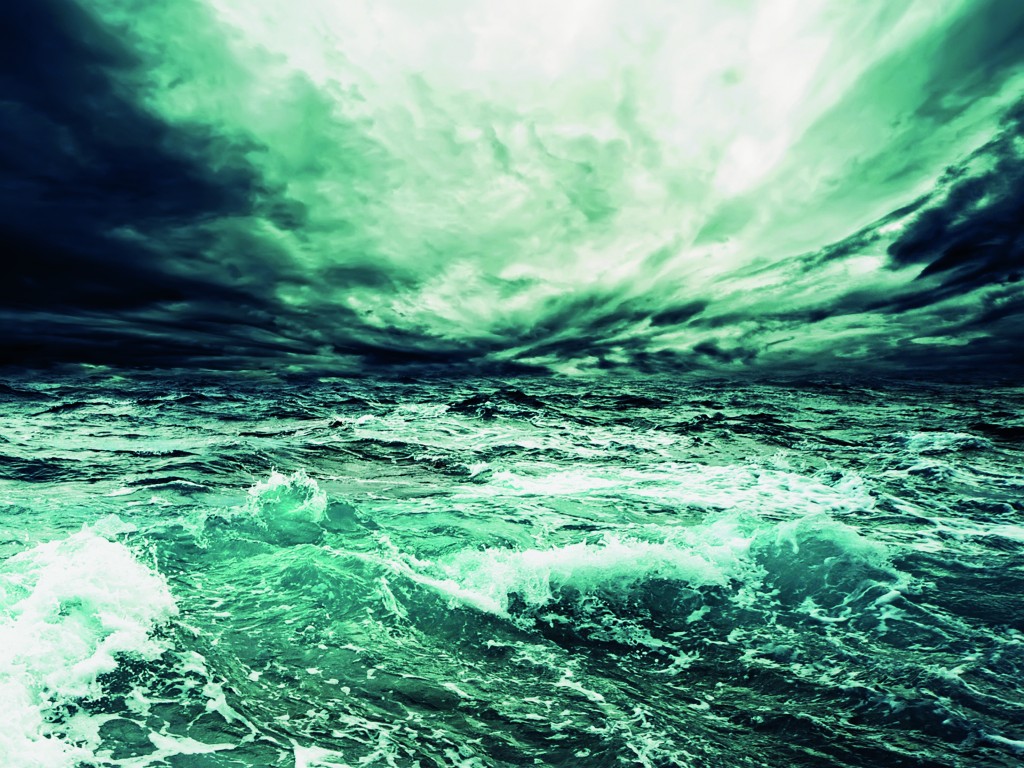 Going out to sea well informed about the weather forecast will minimize the risk of finding yourself in the middle of a storm (although sudden and unpredictable weather changes are not unusual in the Mediterranean). Don’t forget to listen carefully to the weather report on VHF channel 68 before heading out to sea: if you are cruising abroad, find out about the reference weather services of the country you are in. Even before you get on the boat, you can keep tabs on developing conditions via the Internet via computer, smartphone or tablet: there are many sites from which to draw data and up-to-date applications. When looking at the weather forecast, do not focus solely on your navigation area and a narrow window of time, but try to gain an overview that includes previous and subsequent weather developments over a wider area; actual conditions may be slightly ahead or behind those predicted, or a depressive center may pass a little further south or north resulting in different conditions.

HOW TO INTERPRET SYNOPTIC CHARTS

Synoptic charts are the graphical representation of atmospheric pressure evolution (usually at 12-hour intervals), from which you can draw other useful information. In Italy, there are many sites that offer them (even superimposed on satellite images), such as meteo-online.com or meteorologica.info, but you can also rely on those prepared by the British Meteorological Service (metoffice.gov.uk), which enjoy an excellent reputation for readability and cover all of Europe. The basics by which to read a synoptic chart are not difficult: on it you will find the main centers of high and low pressures with the corresponding value expressed in millibars (or, more precisely, ecto pascals). The average atmospheric pressure is 1013 ecto pascals, so the center of an anticyclone (the high pressure zone) will express a value above this figure. A deep depression (i.e., characterized by very low pressure), the center of which has a value around 960 ecto pascals, for example, will be more damaging inshore because the deeper a depression is the greater the intensity of the wind created by the disparity in atmospheric pressure. The distance between the isobars on a synoptic chart, called the isobaric gradient, tapers off as the wind increases so expect high winds and seas if the lines are very close together. Air masses do not move in a straight line from the centers of high pressure to the centers of low pressure, but follow a clockwise rotary motion out of anticyclonic zones and clockwise into depressions at an angle of about 15 degrees to the isobars. The synoptic charts also show major warm, cold, stationary, and occluded fronts. Fronts are the points where air masses of different temperatures meet. This temperature difference always causes precipitation, so figuring out when you will encounter a front will help you know if you will find rain, and what the weather will be like after the front passes: after a warm front generally follows overcast and gloomy skies, but after a cold front the weather should start to improve. 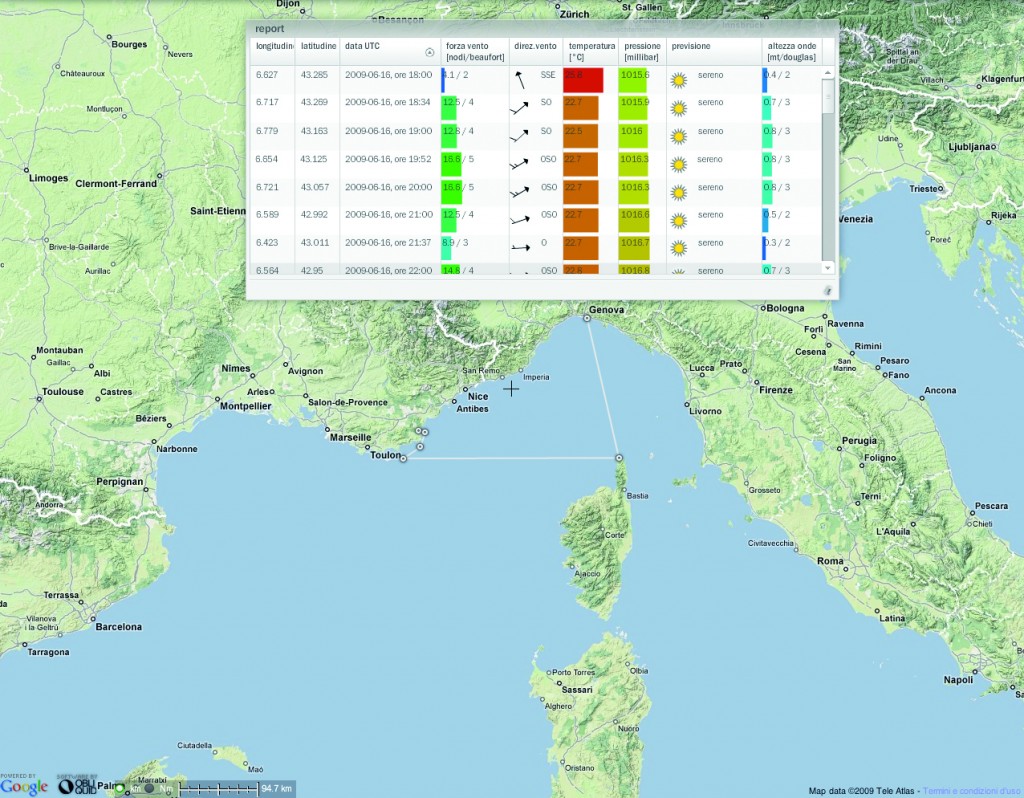 ONLINE WEATHER REPORTS AND GALE WARNINGS.
To view the weather report associated with the synoptic charts you can use the Air Force website (meteoam.it) or on that of the Meteo Lamma consortium (lamma.rete.toscana.it) you will also find sea and wind status at 10 meters as well as gale warnings. But if you want to have everything you need to know what the weather will be like without struggling, there is the forecast site for the entire Mediterranean, www.meteomed.it. With these tools you should be able to navigate informed and thus in relative safety. Why relative? Because, as we said at the beginning, especially in the Mediterranean, the unexpected is always around the corner. One source you can rely on to get another “bell” and understand what will happen around you in the short term are wind fields.

THE USEFULNESS OF WIND FIELDS
Grib files (Italian for wind fields) contain vector representations of current and expected wind: especially used in regattas, they can also be very useful for cruising if you have some basic knowledge of meteorology. Although no warm and cold fronts or even cloud cover are shown on the wind fields, you can obtain much additional information deduced by logic from reading them. First and foremost are those related to cyclones and anticyclones: high pressures will be characterized by weak winds in clockwise rotation while depressions will be recognized by intense wind vortices in counterclockwise rotation. In addition, warm and cold fronts are exclusively associated with depressions, so after identifying the centers of high and low pressures, by observing the wind distribution, you can deduce the type of front associated with the specific depression. And, from that, predict the weather development in the following hours. Let’s take a practical example: if you are south of a depressional center, upon the arrival of a warm front the wind will initially rotate from west-southwest toward the south and then blow again from the southwest. Look on the wind field representation for the areas (from right to left) where the wind follows a south-southwest rotation and you will have found the warm front. In the area where the wind blows from the south you will probably have clear skies with high temperatures. As the warm front approaches, you will begin to observe “whiskers” in the sky, and the sun will be covered by a halo: darker and lower clouds will follow, and it may begin to drizzle. The wind will not necessarily be increasing and will not be particularly unstable and gusty. As the warm front passes you can expect a few showers that are not particularly violent: the wind will also not experience major increases or significant rotations. After the rain, there will follow a period of relaxed breezes that are very regular in intensity and direction (generally from the southwest) characterized by overcast skies and a chance of rain showers. What you will have to be most concerned about, however, is the passage of the cold front, because it is often associated with gales: the distance between the warm and cold front is directly proportional to your distance from the center of the depression, so watch out if you are in its vicinity because the intensity of the wind may undergo a sudden change. The approach of the cold front does not always occur in the same pattern: sometimes you will observe a gradual strengthening of the wind (with a slight westward rotation) and cloud cover, or from a “calm before the storm”: the advice is to supplement the analysis of wind fields with real-time observation of the sea around you. Here are the addresses of some sites from which you can download grib files: lamma.rete.toscana.it, zygrib.org, meteoliguria.it, adriamet.info and windguru.cz/it.