Original, stylish, sometimes unmarine but often trendy: the day sailer is a genre that, while not very popular in the Mediterranean, has always engaged designers in the search for new forms and solutions for design.

These boats are typical, but not exclusive, to lakes, and usually combine enjoyable sailing performance with a general ease of use suitable for family crews.

In recent times there have been those who have had fun experimenting with this formula even on oversize sizes, 100 feet for instance, but in general what is striking about these boats is that they are very aesthetically appealing. 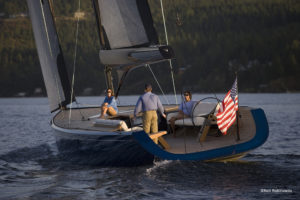 Uncompromising style. Totally open stern, flush deck, no visible tops or maneuvers, and sporty off-road look. Of course, this is a totally custom design, and there’s more: the owner, Duane Hagadone, decided to have it built at “his home,” that is, at a shed of Hagadone Marine Group, already a specialist in small wooden lake boats, in the heart of the northern U.S. state of Idaho. The design was entrusted to Britain’s Tony Castro, and the construction chosen was a composite of wood and carbon, laminated with epoxy. The on-board hydraulic circuits were entrusted to Cariboni. 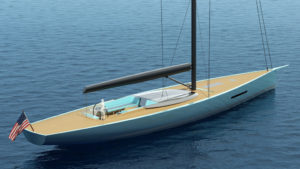 We could not fail to include Philippe Briand’s gem. Sure the size is not exactly daysailer, but the style is just that and from an aesthetic point of view the look is extremely sophisticated with a clever mix of classic, see the stern detail, and ultra modern. A streamlined, aerodynamic deckhouse, a flush deck, and an old-fashioned center cockpit characterize the boat. Obviously, carbon construction also takes center stage here; on such a high level of customization, build quality certainly cannot be outdone. 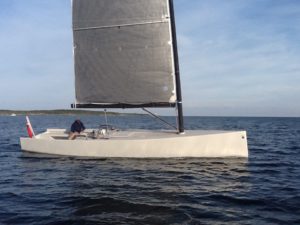 Here we land beyond a new frontier: the single daysailer. Seen from the bow it almost looks like a huge Finn, a drift to be steered solo especially because of the choice to rig it only with a large mainsail, as is precisely the case on some singles. However, the cockpit is deep enough, as is excellent organization of maneuvers for solo driving. Design by German Frers for Mboats Buenos Aires.

Typical daysailer, but this time with an Italian signature, in speficio the design is by Allessandro Comuzzi. Built by the De Cesari Shipyards of Cervia, it was constructed of cross-laminated timber with cross planking and West system resins and features the unmistakable ragi-free wheel. The goal of this project was to conceive of a barrier-free boat from the outset and not to retrofit it for wheelchair users. Wheel steering, to the exclusion of other systems already found on disabled boats, allows it to be used in any position by both handicapped and able-bodied people. 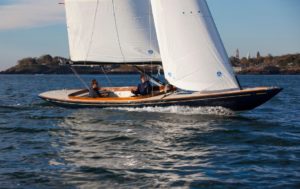 A little bit Dragon, a little bit Soling, with the CV Hood 32 we return to a classically flavored design, a variation of the same concept. Deep cockpit, maneuvers optimized for two people, with self-tacking jib and asymmetrical rolling jibs make this day sailer perfect for day sailing on a lake or in calm waters. Built by CV Hood Yachts at the shipyard located in Marblehead, Massachusetts.