Venice Hospitality Challenge, eight superboats in the heart of the Serenissima 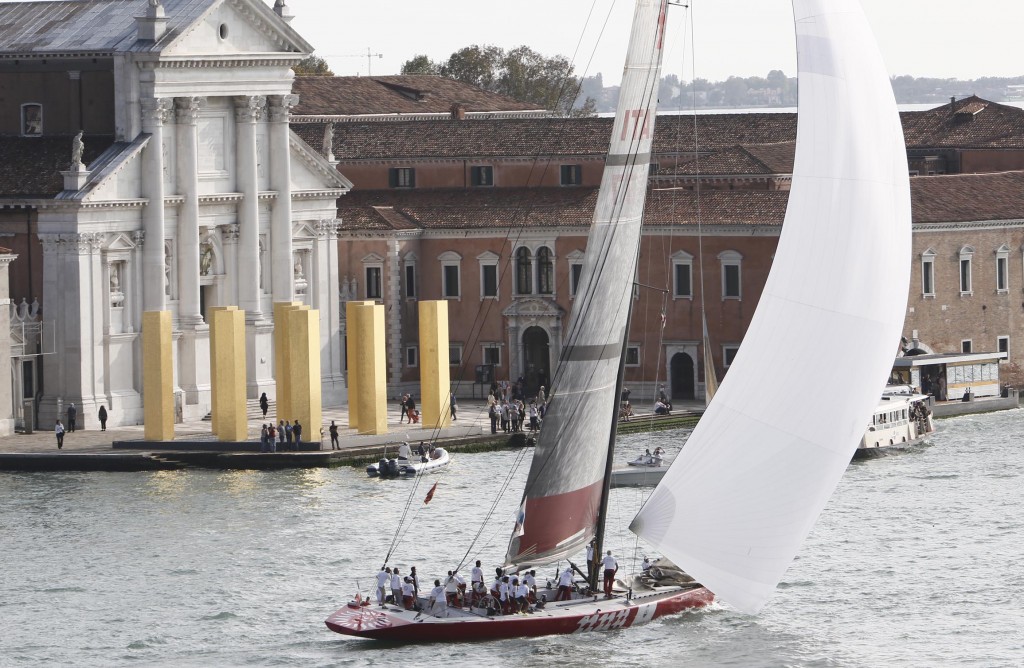 St. Mark’s Basin and the Giudecca Canal on Saturday, October 17, become the arena for the most spectacular regatta of the year, the Venice Hospitality Challenge, an exclusive event born from the union of sport and glamour, desired by Mirko Sguario and the Venetian luxury hôtellerie. In the heart of the city, in front of the eyes of Venetians and tourists, eight maxi yachts, helmed by some of the most important names in Italian and world sailing, will challenge each other between tacking and buoy turns. Paul Cayard, the famous skipper who led the Moro di Venezia to the America’s Cup final in 1992, Vasco Vascotto the tactician who won the Barcolana last Sunday, Mauro Pelaschier who was skipper of Azzurra in 1987, the first Italian boat to compete in the America’s Cup, Furio Benussi, the Venetians Eulisse brothers.

Each maxi yacht bears the colors of one of the participating hotels: Ca’ Sagredo Hotel competes with Jena, Belmond Hotel Cipriani with Anywave, Hilton Molino Stucky Venice with Pendragon, JW Marriott Venice Resort & Spa with Kiwi, The Gritti Palace, a Luxury Collection Hotel, with Il Moro di Venezia, Hotel Centurion with Shining, The Westin Europa & Regina with Idrusa, and the second Luxury Collection hotel in Venice, the Hotel Danieli, with Ancilla Domini. Palazzina G and Hotel Monaco & Grand Canal are also part of the event. The crews’ uniforms are made by Marina Yachting. 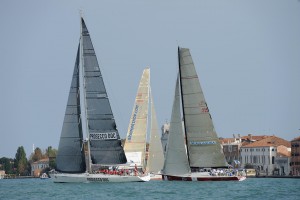 PATH FOR THE PUBLIC
The 6-mile course this year is designed to be even more engaging for those who wish to follow the challenge. The start (after a technical briefing at 9:30 a.m. at the Hilton Molino Stucky) is at 1:20 p.m. in San Marco Basin: water jets from the tugboats will begin the starting procedures. The first buoy to leave on the left is between Lido and Sant’Elena, from here it’s back to Bacino San Marco to turn two more buoys, the first in front of Piazza San Marco, the second at Zitelle. It still proceeds to Molino Stucky where there will be one more buoy to leave on the left before running the last side and cutting the finish line between the Zitelle and Punta della Dogana. This will be followed by the awards ceremony on the Isle of Roses at the JW Marriott Venice Resort & Spa accompanied by Moët & Chandon bubbles. Those who want to see the maxis even closer will find them moored in the new Marina Santelena, which for Saturday and Sunday opens its doors to all. “I hope that the weather conditions will allow us to offer a great show to the entire city with this new and engaging route we have designed this year,” Mirko Guario comments a few days before the event.

EMOTIONING CHALLENGE
It promises to be an exciting challenge: three of the eight maxis that are racing next Saturday are in the top four places in last Sunday’s Barcolana standings. Jena (second place), Pendragon (third place), Anywave (fourth place). At the helm of this latest Saturday in Venice Hospitality is Venice’s most beloved sailor Paul Cayard, as part of the Onboard project. This time the Moro di Venezia Cayard will have him as an opponent: the red hull wanted by Raul Gardini now has Claudio Carraro as skipper. Ancilla Domini has as skipper another great protagonist of world sailing, Mauro Pelaschier, and as tactician Claudio De Martis. At the helm of Jena is Furio Benussi, winner of nine Italian titles and nine world podiums, of Kiwi Andrea Pesaresi, of Pendragon Salvatore Eulisse with Vasco Vascotto and with Venetians Giovanni Boem and nine-time world champion Cesare Bozzetti. Idrusa has Paolo Montefusco at the helm, Roberto Ferrarese as tactician and counts some 15 world titles distributed among the various crew members. A great enthusiasm for this regatta was shown by Shining, the famous Croatian maxi from Umag, with skipper Zeljko Perovic perhaps because of the historical link between the two cities: a link that dates back to the year 828 when the people of Umag offered shelter from a storm to two Venetian merchants fleeing from Alexandria with the remains of St. Mark. From that day the lion became part of the Croatian city’s coat of arms. From 1269 Umag and Istria became part of the Venetian Republic. To the top three finishers in the Venice Hospitality Challenge will go blue Murano glass doge hats, this year made by the Abate Zanetti School of Glass. The intent is to have a different Murano glassworks make the awards each year, as well as a different color, to allow them all to shine.