Or rather, a rebel hero capable of uplifting through imagination, skill and determination our spirits and moods tried by a dark period like few in recent human history. 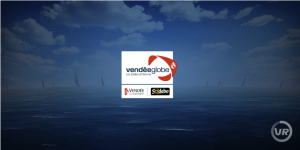 But who is this person, who are we talking about? A man capable of making us dream again, envied by other men and loved by women (by female sailors for sure), like all heroes we do not know his real name, concealed behind a nickname, a modern mask with a cloak that actually protects a person like all of us, in his everyday life, a person perhaps slightly overweight and gray-looking, forged and lashed but not defeated by what life has dealt him.

But what did he do you ask, well we have few certainties in this story that already smells of legend, for starters, a battle name, gangly and solemn, Kasihan, sit comfortably or drink coffee in front of your smartphone, and read in this short article about his incredible exploits.

Many of you may know that for more than a month now the Vendee Globe, the most extreme and longed-for around-the-world solo race, the Holy Grail of sailors, has been taking place. We witnessed, thanks to the excellent video coverage to touching moments, to joys and sadnesses, such as breakages and withdrawals among which also fell the mythical Alex Thomson who for the third time in a row failed to become the first non-Frenchman to win the race, to rescues at sea, as happened to Kevin Escoffier, rescued by the equally mythical Jean Le Cam, all seasoned also by our Pedote who between a blizzard and a cippa led us poetically around the world.

But, at least this time we are not here to talk about them, we are here to tell you about the highly followed Vendee Globe e-regatta, developed by Virtual Regatta Offshore, where approximately one million e-sailors take part. In my own small way I am also participating, although after an unfortunate shipwreck on an unspecified island in the Indian Ocean, I lost some of the “garra” regarding the final outcome. I then enjoyed and focused on the regatta of others and randomly encountered the story I am writing about, the story of Kasihan precisely.

So here we come to why I am writing about him, about this novice Robin Hood, you should know that Virtual Regatta, stakes a valuable, specially created watch named Ulysse Nardin Driver x Nemo worth 8,900 euros, not for the one who will win, but rather for the one who will first reach the infamous “Point Nemo” the point on the globe farthest from all landmasses, located roughly in the middle of the Pacific Ocean.

Lo and behold, while the fleet has recently passed New Zealand, the prize has already been awarded (although America’s Cup-worthy disputes will follow), how? Our hero, Kasihan, perhaps also reading the stories in the Sailing Newspaper, retraced, and succeeded in doing so, the ingenious and ill-fated idea of Donald Crowhurst who, in the legendary Golden Globe Race of 1969, thought he would win the race by waiting for the fleet off Brazil, falsifying the logbook and showing up in the first positions once the fleet returned to the Atlantic after circumnavigating the land.

Well Kasihan went further, sailed the course in reverse, passed Cape Horn leaving it to the right, arrived first at Nemo Point, won the challenge and thus the coveted prize, and moreover, to mock the system he also took advantage of the opportunity to re-enter the race, as per the rules from the support e-ship, and then finish, according to the e- instructions the e-Vendee Globe.

Our story of ending like this, time will tell if it was true glory, but in these moments , in this unfortunate year, anyone who manages to crack a smile, is to be considered well-deserving, a hero, indeed an e-roe.