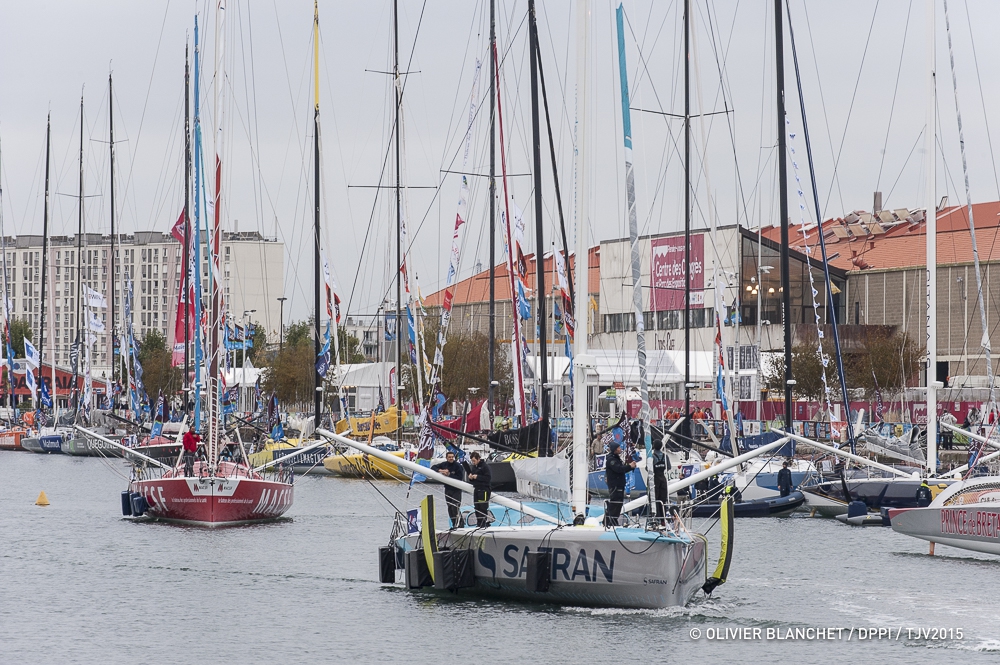 Starting today, the twelfth edition of the Transat Jacques Vabre (5,400 miles in doubles from Le Havre, Normandy, to Itajaì, Brazil), as per tradition a parterre de rois of ocean sailing, comes into full swing. Great sailors aboard great boats. It starts tomorrow, October 25: especially in some categories, it is a challenge between titans.

SAM MANUARD, DESIGNER-AND WHAT A TESTER!
The Class 40 grouping, with fourteen boats at the start, is the one that eludes predictions the most. There are many promising young people, but eyes are on the new jewel V&B, designed by guru Sam Manuard and built by JPS shipyards in la Trinité sur Mer. The architect is keen to test the boats himself, and in fact he shows up on the starting line right on board V&B paired with Maxime Sorel. But attention must also be paid to the likes of crews such as Bertrand Delesne and Nils Palmieri, on Teamwork 40 or Concise 2’s pink duo consisting of South African Philippa Hutton-Squire (85,000 miles behind him and a round-the-world tour) with Pip Hare (the only Englishwoman to have taken part in two Mini Transats, in 2011 and 2013). Everyone wants to win and lowerthe GDF SUEZ regatta record of the Rogues/Delahaye pair: (20 days, 21 hours 41 minutes and 25 seconds at 11.12 knots average speed in 2013). 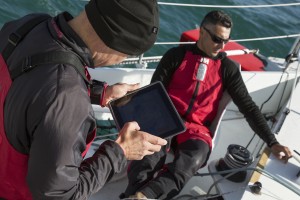 FORZA PEDOTE
There are only four Multi 50 trimarans: perhaps that is why the battle is harder. We, of course, are rooting for Giancarlo Pedote, aboard FenêtréA Prysmian paired with Erwan Le Roux. The 39-year-old Florentine sailor, fresh from his second place in the 2013 Mini Transat (fourth in 2011), decided to challenge himself on multihulls, with excellent results: together with Le Roux in 2015 he won all five regattas in which he participated. 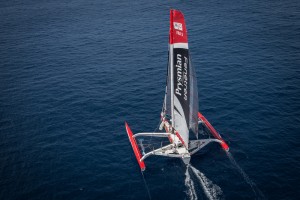 Among the opponents to beat are the very strong Gilles Lamiré and Yvan Bourgnon (fresh from his incredible round-the-world voyage aboard an uninhabitable catamaran) on La French Tech Rennes Saint-Malo and Lalou Roucayrol with César Dohy aboard Arkema, the newest of the Multi 50s in the race, launched in 2013. The record belongs to FenêtréA Cardinal (Erwan Le Roux and Yann Eliès): 14 days 17 hours 40 minutes and 15 seconds in 2013, at 15.30 knots average. 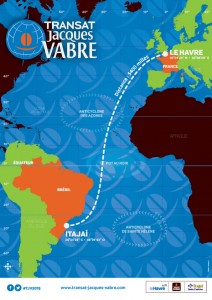 IMOCA 60, WHAT WILL HAPPEN?
But the real focus of this Jacques Vabre is them, the IMOCA 60s. 2015 was the year of revolution, the year of the introduction for the Open of the Dynamic Stability System (DSS). Two real retractable foils that replace, or rather incorporate, traditional daggerboards and work in a double sense: they increase the righting moment and cause a vertical lifting effect (lift) to greatly reduce friction on the water. Tests have shown that in winds in excess of 20 knots these boats are practically able to sail completely lifted out of the water, with important gains in speed.

VIDEO – HOW FOILS WORK ON IMOCA

THE CLUB OF THE “PRIVILEGED”
Obviously all the best (there was also our own Andrea Mura, who failed at the last to scrape together the money to participate in the regatta, even though he had the boat ready), sponsors permitting, opted for these latest generation hulls: there are five “privileged” (and therefore candidates for victory) out of twenty participants. According to dockside rumors, it appears that the best performing boat is Morgan Lagravière and Nicolas Lunven’s Safran: designed by VPLP/Verdier and built by CDK Shipyards, it is 18.28 meters long and 5.80 meters wide. Lagravière is 28 years old but he knows how to race boats, having been on the French Olympic 49er team. But speed may not be enough.

The ultimate champions of experience are Armel Le Cleac’h and Erwan Tabarly, on Banque Populaire VIII, also signed by VPLP/Verdier and made by CDK. Completing the list of “papabili” are the following Alex Thomson in duo with Spaniard Guillermo Altadill on Hugo Boss (VPLP/Verdier project, Green Marine construction), Sébastien Josse with Charles Caudrelier (fresh off an excellent Volvo Ocean Race as skipper of Dongfeng Race Team) on Edmond De Rothschild (designed once again by VPLP and Verdier, but built by Multiplast of Vannes) and Jean-Pierre Dick and Fabien Delahaye on St. Michel – Virbac (also made by Multiplast to a design by Verdier): watch out for these two, Dick is one of the very few to have won the Jacques Vabre three times. Among the “regular” IMOCAs, Professor Michel Desjoyeaux will try to have his say on SMA, paired with Paul Meilhat. The record time, which could easily fall, is the one recorded by PRB (Vincent Riou-Jean Le Cam) in 2013: 17 days, 41 minutes and 47 seconds à 13.30 knots average. 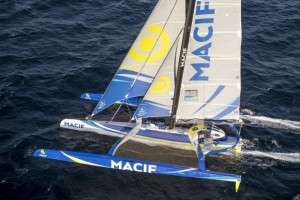 GABART AND BIDEGORRY, THE SUPERCOUPLE
In the Ultime category, that of maxi trimarans, François Gabart paired with Pascal Bidegorry is the favorite. The ingredients are all there: an ocean sailing prodigy and an experienced recordman aboard a superboat, the new 30-meter Macif (coincidentally designed by VPLP/Verdier). But trust me: Lionel Lemonchois (with Roland Jourdrain on Prince de Bretagne) and Thomas Coville (aboard Sodebo with Jean Luc Nélias) will not be watching…