There’s an Italian leading the toughest transatlantic ever

Forget about the two maxi trimarans Macif and Sodebo, which have already arrived in Brazil, real extraterrestrials compared to the other boats. The fastest man in the Transat Jacques Vabre (5,400 miles in doubles from Le Havre, Normandy, to Itajaì, Brazil) for now is himself, our own Giancarlo Pedote: aboard the Multi 50 FenêtréA-Prysmian, along with Erwan Le Roux, the Florentine is just over 600 miles from the finish, more than 330 ahead of the second Multi 50, Thierry Bouchard and Oliver Krauss’ Ciela Village.

LEADING THE FLEET
But what is most important is that Pedote and Le Roux outperformed even the longest IMOCA 60s, thus finding themselves at the head of the overall fleet-a great result, achieved on the comeback after a conservative start designed to preserve the boat in the storm. FenêtréA-Prysmian’s ETA (Estimated Time of Arrival) in Itajaì is set between Tuesday and Wednesday. The current record for the Multi 50, which could easily be broken, is 14 days 17 hours 40 minutes and 15 seconds in 2013, at 15.30 knots average. 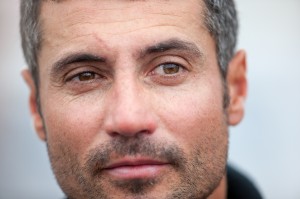 BUSINESS CARD FOR THE GLOBE VENDEE?
This would be yet another great achievement by Giancarlo: the 39-year-old, fresh from his second place in the 2013 Mini Transat (fourth in 2011), decided to challenge himself on multihulls, with excellent results: together with Le Roux in 2015 he won all five regattas he participated in. And in his mind is IMOCA 60: “By now even my neighbor knows that that is my passion,” he had confessed to us in an interview. With a resume of this caliber, Pedote could be knocking on the door of the toughest challenge of all, the Vendée Globe (solo round-the-world race). 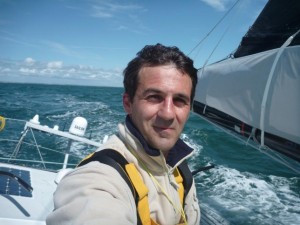 PEDOTE AND DI BENEDETTO, IT WOULD NOT BE UTOPIA
For now, the only Italian pre-registered for the regatta is Alessandro Di Benedetto (seeking funds, including from Italian brands, to participate), who has already taken part in the last edition aboard Team Plastique. Giovanni Soldini said of him, referring to the solo round-the-world race he completed, between 2009 and 2010, aboard a 6 1/2-meter (never has anyone managed to do it with such a small boat), “Perhaps Italy did not realize that it had a great navigator and a great man of adventure who succeeded in a feat that will remain in the history of sailing forever.” With the deadline for pre-registrations set for July 2016 (September 1 is the deadline for actual registrations), there is still time for both Di Benedetto and Pedote to find boats and sponsors.

IT’S NOT EASY BUT.
Surely what happened to Andrea Mura, who was forced to abandon the Vendée project due to lack of funds after building the boat, gives an idea of how difficult it is in Italy to put together a round-the-world campaign: but Pedote, who we recall was elected Champion de France Promotion Course au Large en Solitaire (Champion of France Promotion Offshore Racing in Solitaire) in 2013, is very sympathetic to the French, and who knows, it may attract some major brands from beyond the Alps, which may perhaps act as a “pull” for domestic sponsorships. And let’s not forget the huge media return offered by the Vendée: two million people in Les Sables d’Olonne for the start and finish of the regatta, 30 million videos viewed on Dailymotion and Youtube, and much more (in 2012 the event was more watched than the Tour de France and Roland Garros). 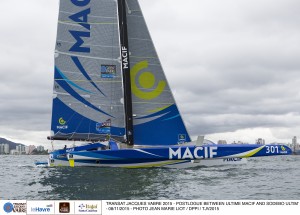 LATEST, GABART WINS BUT NOT CONVINCING
And now, instead, let’s get back to talking about the regatta, the Ultime class and Macif: François Gabart and Pascal Bidégorry’s brand new 100-footer won but did not convince. In fact, it took him 12 days, 17 hours, 29 minutes and 27 seconds to complete the 5,400-mile Jacques Vabre (7 hours and 18 minutes ahead of Thomas Coville and Jean-Luc Nélias’ Sodebo): thus, the record of 11 days, 5 hours, 3 minutes and 54 seconds set in 2013 on the MOD70 Edmond de Rothschild by Sébastien Josse and Charles Caudrelier holds out.