There are two boats, southwest of the English Channel, 33 miles from each other. Aboard the one closest to Les Sables d’Olonne is a very strong and meticulous French navigator: his name is Armel Le Cléac’h, and on his IMOCA 60 Banque Populaire VIII (one of the latest generation, foil-equipped ones) he is set to win the Vendée Globe (nonstop solo round-the-world race) with a record time of 74 days, 3 hours, 35 minutes and 46 seconds.

On the second boat, Hugo Boss (also a state-of-the-art hull complete with appendages) the Welshman Alex Thomson, always ready to put on a show and beloved by the public: within hours of arriving, he decided to throw in the towel and give it to his transalpine colleague after a 24,500-mile match-race around the world. Thanks to the two skippers, all of us enthusiasts experienced a beautiful Vendée Globe. So let us get to know them better, these two heroes, so different in sailing style and experience, but whom fate has brought together in the most epic of adventures. Let’s get to know them through the drawings of an exceptional illustrator, Luca Tagliafico from Genoa.

LE CLEAC’H’S SENSE OF NAVIGATION
Let’s start with the winner, Armel Le Cléac’h: “the Jackal,” they call him. An ugly and unfair nickname (derived from the French assonance of his surname with “le Chacal” as well as for his ability to lash out at the right moment when the opponent is in trouble) for a shy and modest sailor but with two such “attributes.” Le Cléac’h was born in Saint-Pol-de-Léon (Finistère), on May 11, 1977: the third of four children, his parents took him from a very young age aboard the family boat, a Muscadet (an old 1963 design by Philippe Harlé), between the Bay of Morlaix, the Vendée coast and even to Ireland. Sailing even at night, he develops an uncommon sense for wind and currents.

Then comes the classic rigmarole of dinghies, the Optimist and the 420: but it was in 1994, when 17-year-old Le Cléac’h spent his first night alone on board in the bay of Morlaix, that the young man understood his true path, the course au large. The results were not long in coming: in 1997 he won bronze in his first solo regatta, the Solo Le Télégramme.

The fastest round-the-world sailor in monohull and solo sailing has a long palmares of success behind him: IMOCA World Champion in 2008 and French Course Au Large Champion in 2003, he won the Solitaire du Figaro (offshore atappe regatta) in 2003 and 2010, the AG2R in 2004 (Lorient-Saint Barth) and 2010 (Concarneau-Saint Barth), and The Transat Bakerly 2016 (ex-Ostar, Plymouth to Newport) among IMOCAs. In addition, Le Cleac’h holds other records: that on the Marseille-Carthage route (18 hours, 58 minutes and 13 seconds) and Cadiz-San Salvador (6 days, 23 hours, 42 minutes and 18 seconds), both solo aboard the maxi trimaran Banque Populaire VII. In 2008/09 and 2012/13, he had to “settle” for second place at the Vendée, behind “Professeur” Michel Desjoyeaux in the first case and François Gabart in the second: good third, then.

HIS GREATEST MISFORTUNE
At times Le Cléac’h has been very unlucky, but he has always been able to get back up: as in 2014 when, due to a serious hand injury, he had to give up at the last at the Route du Rhum surrendering his very fast maxi trimaran to the older Loïck Peyron (who won and was covered in glory). Almost the same initial plot as Cristophe Offenstein’s 2013 film “En Solitaire” (In Solitaire), for the making of which, ironically, Le Cléac’h had been approached as a consultant. But by the following year he had bounced back by finishing second in the Transat Jacques Vabre (from Le Havre, France, to Itajaì, Brazil), the only skipper (paired with Erwan Tabarly) aboard a new-generation IMOCA to have arrived, the only one to have figured out how to manage and operate the new foils.

THOMSON “BREAKER”? NO, BIG SAILOR
Reviewing Alex Thomson’s story instead, the word misfortune will appear numerous times: some malicious people have even suggested that the Welshman “goes looking for it,” because he always demands the most, sometimes too much, from his boats. Coincidentally, also in this Vendée, he smashed a foil due to hitting a submerged object (a circumstance that allowed Le Cléac’h to overtake him). The trail of disasters left behind by Thomson makes him very sympathetic to the general public but threatens to overshadow his irrepressible prowess as a sailor.

Alex was born in 1974 in Bangor, a small town in the Gwynedd region of Wales. From a young age, his exuberance attracted the attention of British paperboy Sir Robert Mills (the man who fought to bring the Olympics to London and launched Britain’s challenge to the America’s Cup with Teamorigin in 2007), who supported him in his endeavors, allowing him to enter the world of offshore sailing early on.

A TRUE ENFANT PRODIGE
A confidence that Thomson repaid by winning in 1999, aboard Ariel, the Clipper Round The World Race (a round-the-world stage race aboard Clipper 60s, devised by Robin Knox-Johnston) and becoming, at not even 25 years old, the youngest skipper in history to triumph in a round-the-world race. And taking advantage of this name as the enfant prodige of around-the-world racing, he enters the world of the more challenging Open 60s.

FOUR YEARS BETWEEN SUCCESSES AND MISFORTUNES
In 2004 came the sponsorship of Hugo Boss, a partnership that lasts to this day: at age 30, he took part in his first Vendée but withdrew due to a boom trough failure. But it was in 2006 that the first “thomsonata” took place: during the Velux 5 Oceans (formerly known as the Around Alone and BOC Challenge, the solo round-the-world race in stages) with the IMOCA 60 sank off the coast of South Africa.

The boat is found in February 2016 in O’Higgins National Park on the desolate west coast of Patagonia, Chile. He immediately redeemed himself by winning the 24-hour distance record on monohulls up to 60 feet in 2007 in tandem with Andrew Cape (501.30 miles, now beaten by Thomson himself in the last Vendée, 536.81 miles at 22.86 knots average!), but in 2008 he again had to withdraw from the round-the-world race, this time due to structural damage to the hull, after just six days of racing.

THE FAMOUS “THOMSONATES”
Years pass and Thomson finds a way to make a name for himself as an “acrobat of the seas”, earning a reputation as a testimonial that every dynamic company would love to have at its service. In 2012 he rose to prominence by being filmed and photographed while, in a suit and tie “yuppie of the City” style, he remained balanced on the canting keel of his tilted Open. It would then be the turn, in 2014, of the famous mast walk, in which he strolls on the imposing mast of the skidded boat, in a tuxedo, and in more recent times of the incredible skywalk, which sees him flying suspended with a kite 85 meters above his latest IMOCA. Again, the tuxedo is a must. Some people call him a clown but-you try it.

THE “RAIN OF TREES” AND THE LAST TWO VENDEE
Let’s take a step back, and go back to the 2012/13 Vendée Globe, the one in which Thomson really clashed with Le Cléac’h for the first time (in 2008 there had been no history), coming in behind him, in third place: he was the first Briton to stand on the podium of the solo round-the-world race. He finds a way to make people talk about him again this time: what had he come up with to repair one of the rudders under sail at the Vendée Globe! Having the necessary material, Alex cut strips of carbon, removed the fiber splinters caused by the breakage, finally welding it all together with a high-strength resin. An easy operation if done quietly and without pressure, somewhat less so at 20 knots of speed amidst the water spray.

The following year Hugo Boss bought him another boat, the Ex Virbac-Paprec with which Jean-Pierre Dick had taken part in the Vendée, but the Welshman was not comfortable: during the transfer to New York (from which he was supposed to leave for the New York-Barcelona) he dismasted and arrived in Newport sailing 800 miles with a makeshift mast; in 2015 he dismasted in the South Atlantic at the Barcelona World Race. With his new foil boat, he made his worst debut by risking sinking at the Transat Jacques Vabre and was rescued by helicopter.

Somehow he salvages the boat and at the last Vendée Globe he gives rise with the Jackal Le Cléac’h to one of the most exciting challenges ever, making the other 27 competitors in the race forget. And if he had not smashed a foil on the 13th day of sailing, would he still have finished second? 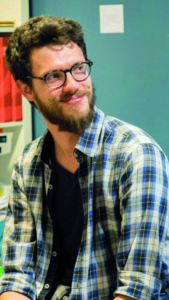 WHO IS OUR ILLUSTRATOR
The author of the drawings is Luca Tagliafico. Genovese, 28, a lover of sailing, is an esteemed illustrator who collaborates with several publishing houses including Einaudi and is among the founders of Rebigo Studio (on Facebook: Rebigo – Illustration Studio). Read more: www.lucatagliaficoillustrator.tumblr.com

FIND THIS REPORT AND MORE IN THE NEW ISSUE OF THE SAILING MAGAZINE, ON NEWSSTANDS AND DIGITALLY