That legendary Louis Vuitton Cup: 30 years ago the victory of the Moor of Venice 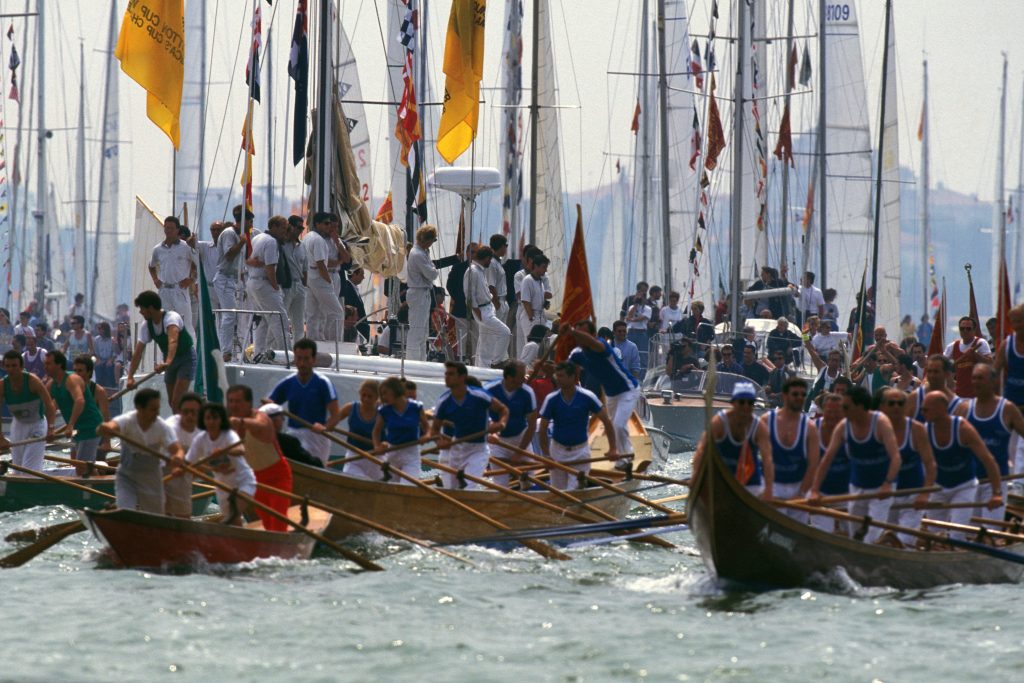 The Louis Vuitton Cup returns to Venice 30 years after Moro di Venezia’s historic victory over New Zealand on April 30, 1992. Sailing was being broadcast on Tele Monte Carlo, Avvocato Gianni Agnelli was speaking on commentary, and Raul Gardini’s boys on the water, led by Paul Cayard, were making Italians fall in love with sailing.

Thirty years after that feat, the Moro crew will return to Venice this weekend to relive and celebrate their victory over Team New Zealand, which earned them access to the America’s Cup final proper. He will do so at the Compagnia della Vela, the club that accompanied the Moro in its challenge, on the island of San Giorgio Maggiore, where the 1992 crew will arrive and where the Louis Vuitton Cup they won will also be present. 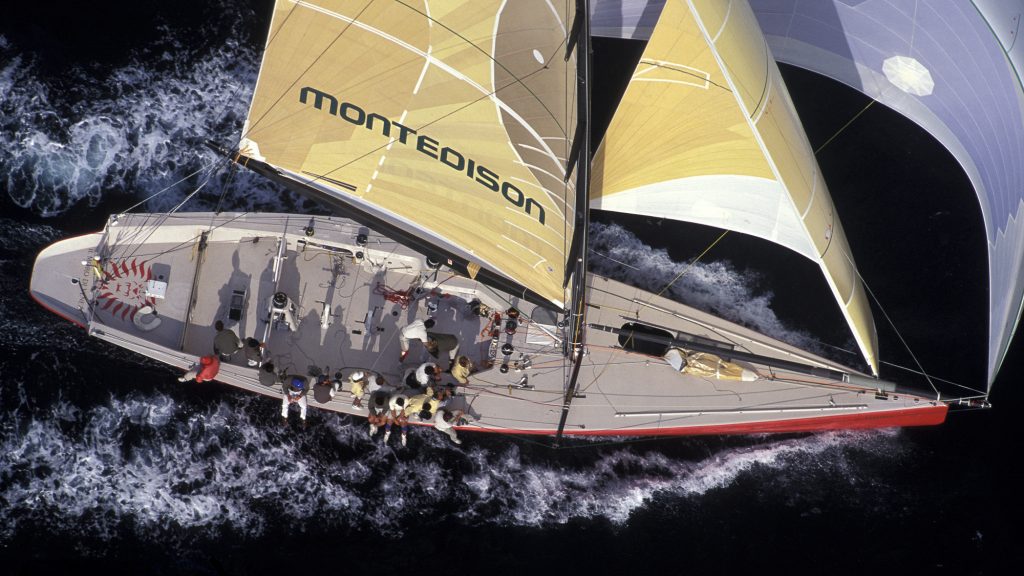 On Saturday at about 5 p.m. in St. Mark’s Basin, Il Moro di Venezia, the second prototype built by Cantieri Tencara for the America’s Cup, will sail, accompanied by the Maxi Ior Moro di Venezia II, another historic boat that belonged to Raul Gardini. A must-attend event for sailing and America’s Cup enthusiasts.

THE STORY OF THE VENICE MOOR

He was a good sailor, the Ravenna-born Raul Gardini: from his first small dinghies in his youth, he had moved on to the Finn, then to the high seas on boats designed by Dick Carter: the 11-meter Blu Optimist, the 13-and-a-half-meter Orca43, with which he won the 1971 Mediterranean Championship, the 15-meter laminated Naif with which he took part in the 1973 Admiral’s Cup.

Then the meeting with Frers, then an assistant at the Sparkman & Stephens firm, who oversaw the design of the first laminated wood maxi that would bear that mythical name, the Moor of Venice: it was a gift from Serafino Ferruzzi, Gardini’s son-in-law, to him and his brother-in-law Arturo Ferruzzi for their achievements at the entrepreneurial level. 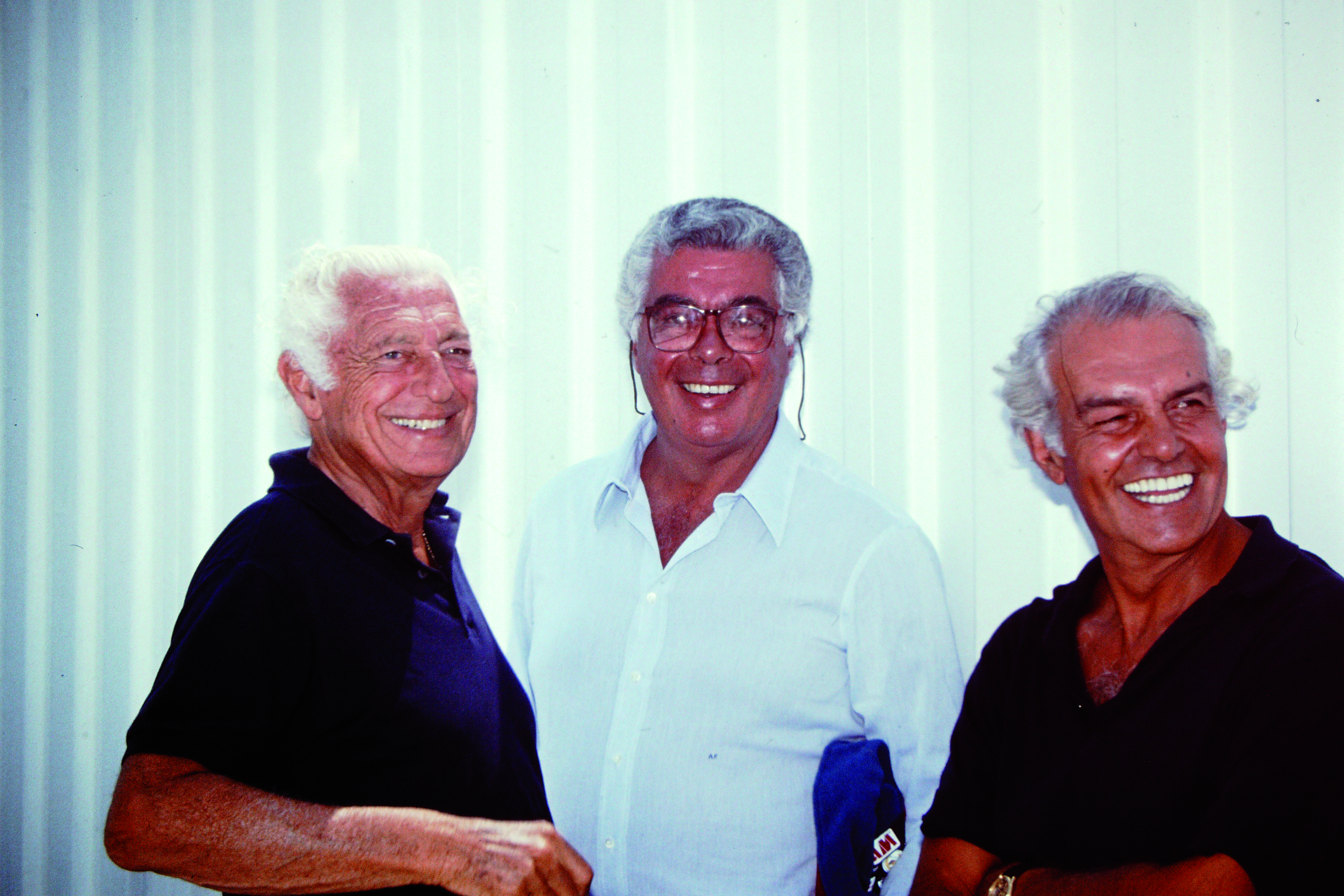 It was 1975. The great saga of the Moor had just begun. After Serafino Ferruzzi died in a plane crash in 1979, his heirs entrusted Gardini with the future of the Montedison company, and the Commander began his rise. Meanwhile, in 1983, another Maxi flanked Frers’ jewel, The Moor of Venice II.

In the very year that Avvocato Agnelli had taken the plunge, promoting Italy’s first America’s Cup challenge, Azzurra, which reached the Louis Vuitton semifinals and made sailing known in our country.

THE AMERICAN CUP IDEA WITH THE VENICE MOOR

We cannot know exactly when the “little light” lit up in Gardini’s head, but certainly a key moment is 1984, when his daughter Eleonora, on vacation in Porto Cervo, witnessed the Sardinia Cup and the feat of a young American, Paul Cayard, who arrived in a hurry to replace Lorenzo Bortolotti at the helm on Nitissima, Nello Mazzaferro’s 50-footer, and won the race outright. Gardini wanted to meet him to test his talent; the occasion was in Palma de Mallorca racing on the Moro di Venezia II. 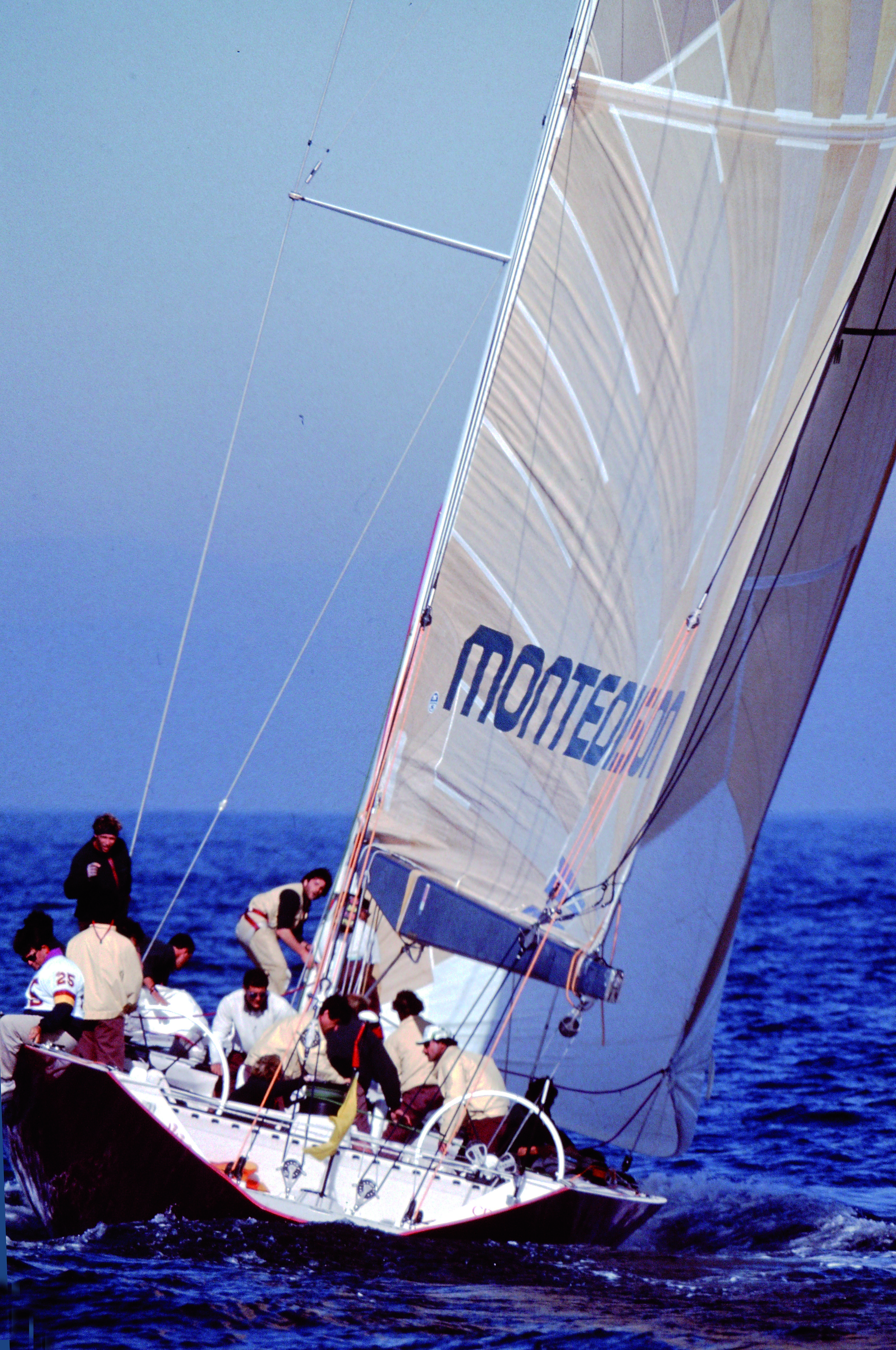 They liked each other: from 1984 to 1992, Cayard was aboard almost all of Gardini’s boats, who had no doubts when it came to choosing the skipper for the Cup campaign. Paul Pierre Cayard, class of 1959, from San Francisco.

Excellent helmsman, level star player, but above all strong in management talent that will prompt Gardini to commission him also as the very difficult task of general manager of the operation. But the issue of nationality? According to the Deed of Gift, the rules of the Cup, an Italian was supposed to helm the boat.

For Gardini, nothing was impossible: Cayard, after signing a 200 million lire a year contract (“I earn like an average NBA player, he confessed to the crew once,” recounts Max Procopio, grinder at Moro) took up residence in Milan. Now the boats and team had to be taken care of, after the challenge, underwritten by the Venice Sailing Company, was delivered to San Diego in November 1988.

For the former, in a fifty billion operation, the Tencara shipyard was founded in Marghera, in front of the Montedison warehouses, where the companies of the holding company led by Gardini with their know-how converged. A hub of technological excellence that would let Americans and the world know that Italy was not just the land of pizza, spaghetti and mandolins.

Crew selections were tough: “Raul’s philosophy, regarding the crew,” explains Max Procopio, “was to create a solid group of people, without too many ‘cocks in the henhouse.’ Team selections started in Venice aboard Gardini’s Maxi in 1989-90: Cayard got help from the Chieffi brothers. It was a hard life of sacrifice: many threw in the towel.” Meanwhile, in a lavish ceremony in the heart of Venice, the first IACC Venice Moor was launched in March 1990 and testing began.

The entourage moved in June to Puerto Portals in Palma de Mallorca, where weather conditions were expected to better mirror those in San Diego. In August, The Moor of Venice II also arrived, while on December 19, 1990, the base of operations moved to San Diego. Where in April ’91 also came Il Moro di Venezia III, fresh from launching, with which the team won the America’s Cup Class World Championship in May.

In June it was the turn of Moro IV, usedonly as a test boat, while in December Moro V (ITA-25), the most competitive boat with which Gardini’s syndicate would take part in the Louis Vuitton Cup, touched the water.

“We lived in an atmosphere of constant espionage in San Diego: helicopters would ply the skies to photograph opponents’ boats from above. I was also a darkroom attendant because I dabbled in photography, spending nights developing photos of Carlo Borlenghi, who was hired as a “spy” as well as a photographer,” Procopio recalls.

And as Il Moro conquered the Round Robins (the elimination stages of the regatta), it became clear that espionage was needed. Especially in the Louis Vuitton final against Rod Davis and Michael Fay’s Team New Zealand: Il Moro was down 3-1 but thanks to Borlenghi’s photos it was possible to prove that the New Zealanders were using the bowsprit as the gennaker tack point, a solution not allowed by the rules.

Their fourth point was nullified, the Kiwis took the blow and Gardini’s boys won the Louis Vuitton by winning 5-3. What went on from May 9 to 16, 1992, is probably the best known part of the story. On the one hand, Il Moro di Venezia V, which had reawakened the appetite for Italian sailing at home, thanks in part to Telemontecarlo’s live broadcasts and Cino Ricci’s commentaries. On the other, billionaire Bill Koch and Buddy Melges, aboard that white shark called America3.

A nastier boat than the Moro, but faster: “We arrived in the final loaded with hope,” recalls Dudi Coletti, trimmer at the time, “but we saw from the start that there would be no history: they had more pace, the boat with light air was better performing, also because the rules allowed them to change the appendages depending on the wind they would encounter. Even when we won the one race, the momentary 1-1, we did it by nudging, by only 3 seconds, thanks to Cayard’s intuition to drop the spi and let it fall forward at the finish.” 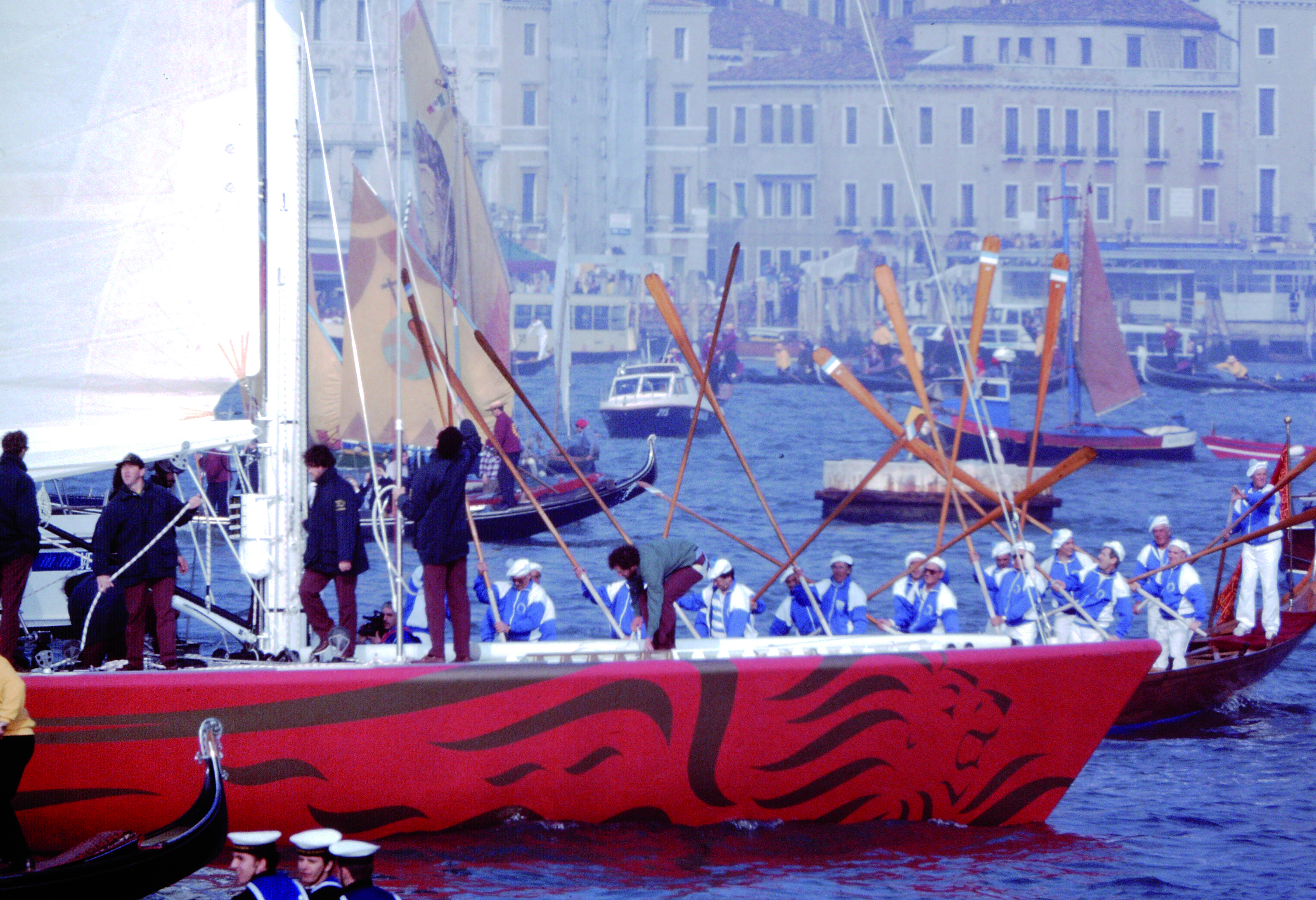 4 to 1. Gardini had lost, but he managed, as a great communicator, to turn defeat into victory. Back in Italy, he organized a party in Ravenna, then in Venice, where the crew, aboard Gardini’s Maxis, was hailed by the entire city. The myth of the Moor of Venice had been born. It still survives today.