TECHNIQUE – How to recharge batteries with the alternator

Going through our archives, we found a series of articles on electricity and power on board by Roberto Minoia. This is related to battery charging through the alternator. 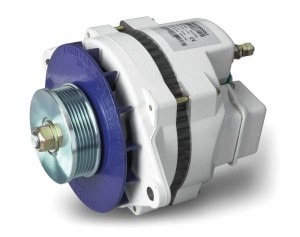 CHARGING THE BATTERIES WITH THE ALTERNATOR
“I would like to dwell on the somewhat more traditional method based on the classic alternator connected to the engine. In fact, this could be a viable alternative to installing a power generator, which, while it would have the enormous advantage of saving the main motor, is not always a viable option for reasons of cost and space. So, if you decide that a photovoltaic system or a wind generator are not for you because they are not sufficient to meet your daily Kilowatt-hour needs, the alternator choice may still be the best and perhaps still the cheapest, though certainly not environmentally friendly. 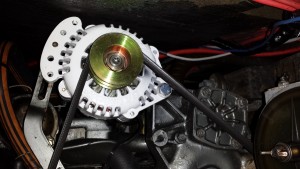 WATCH OUT FOR THE STANDARD ONES
If you think you are entrusting the task of charging the batteries to the stock alternator, you are making a serious mistake. In fact, this is primarily designed to recharge the motor battery, which is not subject to continuous charge and discharge cycles. It is not so much the power that these alternators lack (those installed on recent engines deliver at least 60-70 amps, or 800-900 watts), but the proper charge controller. To be recharged to 100 percent in a relatively short time, batteries need fairly sophisticated charging programs that can deliver all the energy the batteries can store, but without exceeding the threshold that would damage them irreparably (in some cases even causing the battery itself to explode). The voltage regulators mounted on standard alternators are not as sophisticated, and therefore it occurs that usually battery charging with the engine alternator only reaches 75-80% of its theoretical capacity. 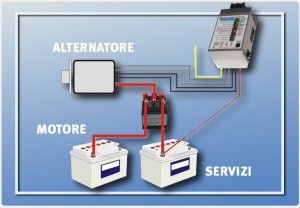 A SECOND ALTERNATOR
Quite a trouble, especially in view of the fact that a battery cannot go below 50 percent of its charge or it will be damaged. It means that we use only 25% of it! That is, a 100 Ah battery charged with the standard alternator delivers only 25 Ah between one charge cycle and the next. Well, quite a waste, isn’t it? The optimal solution in my opinion is to leave the engine alternator connected only to the battery to start the engine (it will be more than sufficient for this task). A second power alternator will then be installed, again connected to the engine, which will be dedicated to charging the services battery pack. This additional alternator will, of course, be connected to an external voltage regulator, of the multi-stage type, which will charge the batteries properly. Alternators of this type can be found on the market, with powers ranging from 100 A (1.5 kW) up to 200 and even beyond (although above 200 prices rise steeply). So let’s see what are the criteria for a wise choice.

WHICH POWER TO CHOOSE?
The maximum power of an alternator should be chosen according to the capacity of the battery pack to be charged. A power of 25-30% of the rated capacity of batteries is usually considered adequate. So for a battery pack with a total capacity of 450 Ah, a 150-amp alternator is chosen. Don’t forget that to produce electricity, an alternator must necessarily draw power to the engine (nothing is created, nothing is destroyed, but everything is transformed). Our 150 A alternator (almost 2.5 kW of power) will “steal” up to 7 horsepower from our engine! 2.5 kW would actually be 3.5 hp, but some of the energy will be “wasted” mostly in heat and various frictions. This is not only a problem of loss of usable power for propulsive purposes, but is significant of the fact that the power alternator will have to be anchored to very strong brackets to prevent it from being torn apart during operation.

WHAT TYPE?
The most difficult thing is really choosing the right alternator. It is important to know that not all alternators are the same. For starters, the power output varies with temperature. Usually the one reported by the manufacturer refers to a temperature of 25 degrees, which is a temperature at which the alternator will never work, since it will reach temperatures above 70 degrees after only a few minutes of operation! Some alternators, at 70 degrees, deliver as much as 25-30% less power than rated. But there are alternators designed specifically to reduce this power loss as much as possible (I think they are characterized by the initials “KKK”). In general, however, alternators that are adequately cooled by a generously sized fan are preferred, because this will always result in higher turbine efficiency. Another feature to pay close attention to is the power curve as a function of rpm. It is necessary to preferably choose a model that begins to deliver a good percentage of the maximum current at a speed corresponding to the idle speed of our engine, otherwise at anchor we will be forced to keep the engine slightly accelerated to speed up the charging process.

Be careful not to be fooled by reading power curves as a function of RPM. It should be known that this curve is always referred to the alternator shaft, and NOT to the engine shaft. In fact, a trick often used to make the alternator more efficient when the engine is idling is to replace the pulley with one with a slightly smaller diameter so that the alternator shaft turns faster. The stratagem works well, as long as you make sure that at high engine speeds the alternator does not exceed the rotational speed for which it was designed, because it could be easily damaged. In short, never choose the alternator at random, but read the technical specifications and power curves carefully first or alternatively, rely on an experienced technician for good advice.

WHO ROBERTO MINOIA IS
Roberto Minoia is in the software design business in life, but as soon as he can, he devotes himself to sailing in the Tyrrhenian Sea aboard his Dehler 41 CR. His passion for sailing and technology, combined with a penchant for popularization led, in 2008, to the birth of the Blog Della Vela (www.blogdellavela.it) where, consistent with his free time, he writes technical articles, reviews boating products that he himself uses, and publishes diaries of his sailings.