Superyacht Challenge Antigua, the stories of great boats (and their owners) 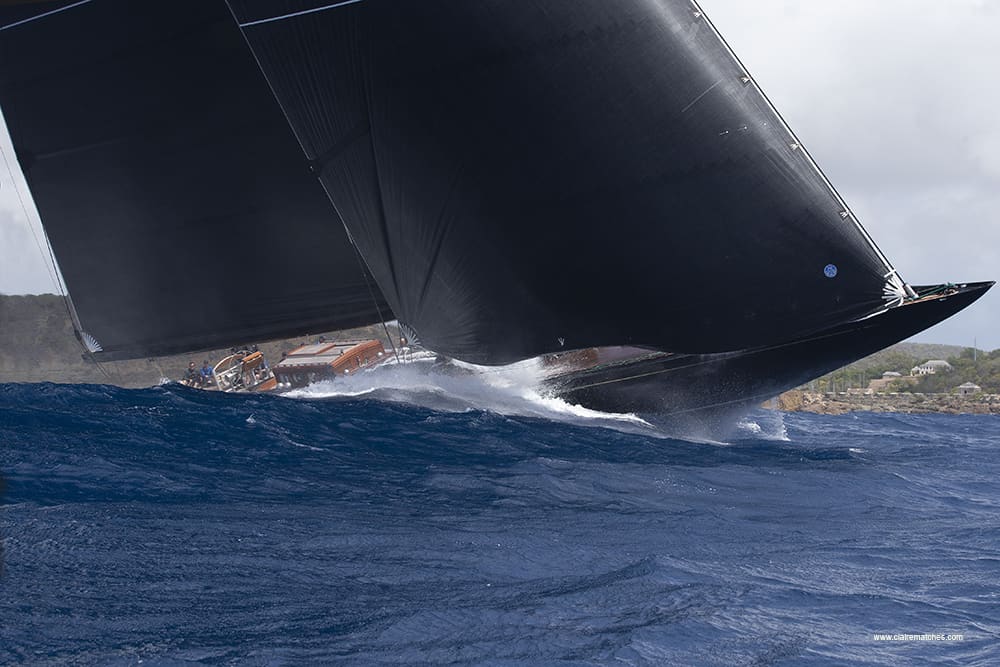 At the Superyacht Challenge Antigua (where, unfortunately, a sailor was missing as we told you here) was our reporter Maurizia Falone Percivale, who takes us on a tour of the great boats and the protagonists of the Caribbean kermis. From the boat of the richest man in Texas to that of the founder of Netscape.

The big boats and stars of the Superyacht Challenge Antigua

Night. A restless wind passes swiftly by, passing through bougainvillea and whipping the tall leaves of palm trees.

At times this week in Antigua’s West Indies, the weather has been harsh, fierce, sometimes cruel; not the usual warm, welcoming wind between 15 and 18 knots, with long, steady waves, cloud-filled skies that thicken in the morning to open up into dry, strong thunderstorms and then leave the sun to dry sails and shirts.

A heavy gray sky enveloped, in awe, the joyous Falmouth Harbour Marina. There, like beautiful foals, the long hulls that participate in the competitions stretch out softly. Argo, Scorpio, Comanche and dozens of others keep each other company after the RORC Caribbean 600 – like friends gathering around tea. Ready to show their teeth as soon as their captains and owners throw them into the fray.

And tomorrow is the last day of racing in the splendid Superyacht Challenge Antigua. The most precious of the Caribbean islands.

Only 11 boats. Some of the best creations from European shipyards, are competing to the bitter end during four days of racing, March 8-13, 2022, divided into three classes: Buccaneers (for Cruising Sloops), Corsairs (for High Performance Sloops) and Privateers (for Ketch-Rigged).

Therefore, we have (in an imaginary clash between Maserati, Ferrari and Bentley):

1) Action (then Kawil and Zig Zag); 2) Nilaya (pursued by Hanuman-the Royal Huisman for sale at the graceful amount of $14,900,000-and Freya). 3) Hetairos (pursued by Rebecca and Kamaxitha).

How the Antigua Superyacht Challenge came about.

For the past 11 years this meeting has been repeated in an event invented, dreamed, organized and realized by two friends, Paul Deeth (son of the organizer of the famous Antigua Sailing Week in 1968) and Stan Pearson. Historical names and surnames on this island of just over 66,000 inhabitants, in the center of the Arc of the Antilles-the islands discovered by Christopher Columbus-submerged in the ‘deep blue Caribbean Sea.

“In March there was a slightly sleepy atmosphere here in Antigua. Squeezed between two major events, the RORC 600 in February and the CLASSIC almost in April, there was a lack of an event that could revive the island, restore interest to shipowners. So I came up with the idea of creating a special, unique regatta; without sponsors, without advertising constraints: a simple regatta, for the boats, for the crews and for the owners. The idea worked. Despite the restrictions due to Covid 19 in past years, the pleasure of getting back on the sea and competing took over and little by little the big sails reappeared” says Paul Deeth, an expert on the sea, hospitality and competition in the majestic Admiral’s Inn, a historic 18th-century complex built by Nelson when he arrived as captain aboard the “North Wind” that is, the H.M.S. BOREAS.

The big sails are here. And as they compete for the last barrel of rum (one of the prizes in the regatta) we get to know them better.

The most significant, the belle of the ball, are undoubtedly Hetairos, Rebecca and Hanuman. 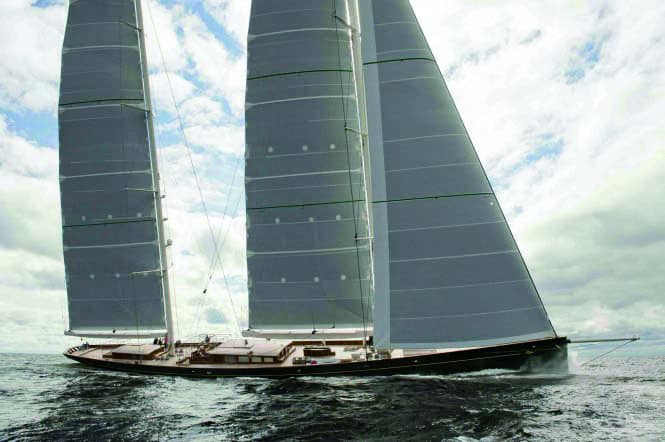 It was designed by Dykstra Naval Architects. Specifically by Erik Wassen who is responsible for its lines and implementation. They also used Rhoades Young Design for the interiors (quite understated and certainly un-Hollywood-like).

The boat recorded a top speed of 25.7 knots just in 2011 by taking line honors (coming in first, to be clear) in the 2011 Transatlantic Superyacht Regatta and Maxi Yacht Cup.

To date, the boat is not for sale and is not available for charter, despite annual maintenance expenses amounting to 10 percent of its initial cost: $3.5 million.

Even today, at 11 years old, this boat won the Superyacht Challenge Antigua 2022 in its class.

Nice satisfaction for Her Otto Happel.

And let’s stop here for today. But we will see her again in just a few days at Bucket 2022 in Saint Barthelemy. 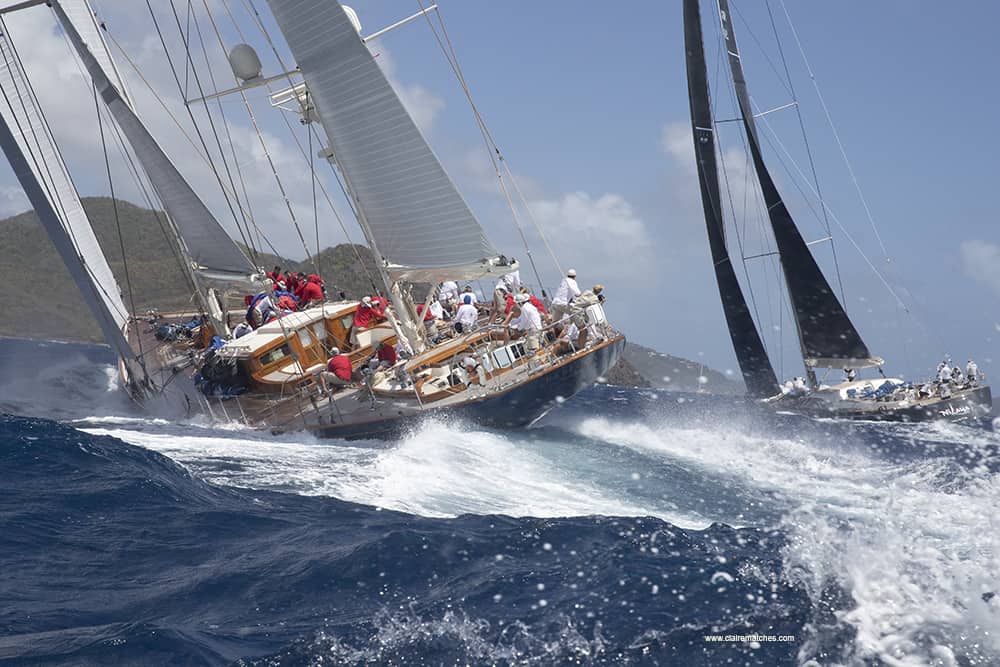 Rebecca is Beauty in its purest state.

Designed with her usual elegance and refinement by the great German Frers, the 42-meter (139-foot) ketch was built in 1999 by Pendennis, the Dutch shipyard founded in 1949 in Haarlem.

The hull is made of aluminum and its maximum speed would be 12 knots. The yacht can accommodate 8 people (with a crew of 8).

He turns out to be the richest man in Texas, according to Forbes gossips. But also an active philanthropist. And for Rebecca these characteristics are essential.

Certainly a boat so carefully cared for and loved has found a gentle and passionate suitor. 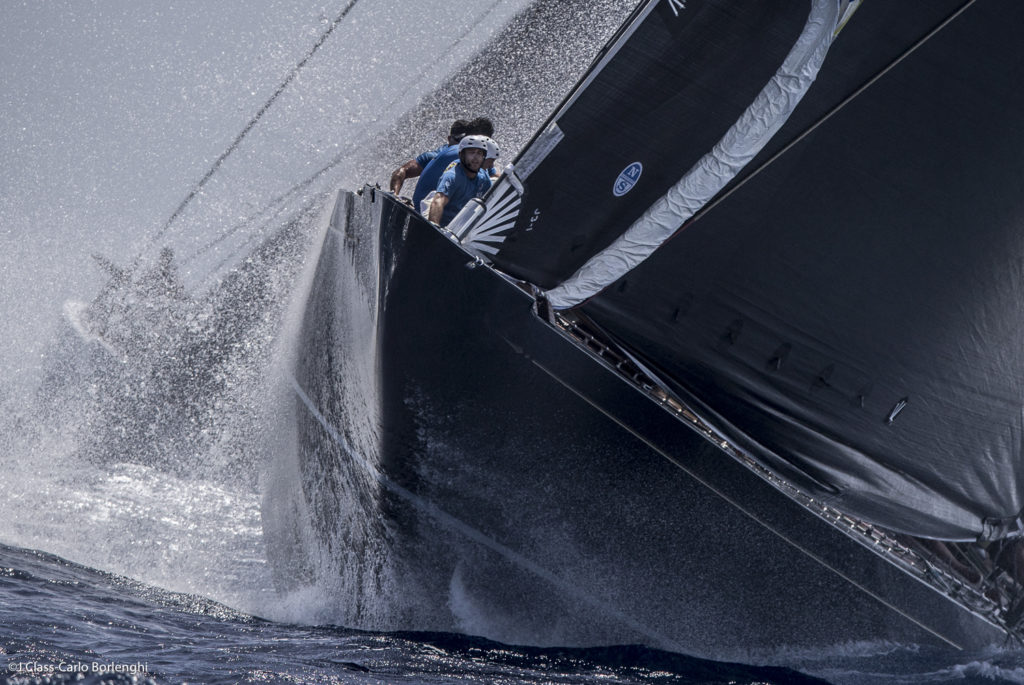 A Hindu monkey god, Hanuman, heir to the wind god Pavana, named a spectacular rendition of the J Class 6, Endeavour II, in 1936.

The owner is Californian Jim Clark, founder of NETSCAPE, and the boat was built and completed in 2009 by Dutch shipyards Royal Huisman to a design by Dykstra Naval Architects.

Hanuman’s continuous and repeated challenges with Ranger, Georgian (Atlanta-based) John Williams’ sumptuous J Class 5, can be narrated, reprising the old “sea battles” of the original two J Classes before World War II. It is thrilling to think that after almost a century we have been able to reconstruct boats and even, to some extent, the feelings that dwelt in Sir Tommy Sopwith and Harold Vanderbilt, old England versus young and already technological America.

But we will continue to talk about this. We are only at the beginning of the journey.

And here it is already morning.

HERE THE RANKINGS OF THE REGATTA

Insight. Shipyards and boats at the Superyacht Challenge Antigua