Sailor dies at Clipper Race: an avoidable tragedy? Maybe you

Tragedy at the Clipper Round the World Race, the round-the-world race in stages (40,000 miles in 9 long legs with 14 destinations touched, 1 year or so of sailing) devised by Sir Robin Knox-Johnston: during the ninth leg in the Pacific (from Qingdao, China to Seattle, USA), 40-year-old Sarah Young, a London-based entrepreneur, died.

THE DYNAMICS OF THE ACCIDENT
Sarah (pictured), aboard skipper Darren Ladd’s Clipper 70 IchorCoal, was tidying up the cockpit after reefing the mainsail–there were 35-40 knots of air–when a wave suddenly hit her, causing her to slam into the drapes. Another wave knocked her off the boat, as Sarah was unfortunately not tied down. Man-overboard recovery maneuvers were to no avail due to poor weather conditions. Recovered the body thanks to the PLB after an hour and a half-an endless time-resuscitation maneuvers were attempted to no avail.

A VERY UNFORTUNATE BOAT
Among other things, a macabre detail has come to light: Sarah is not the first victim aboard Ichorcoal, because as early as last September, Andrew Ashman, a British nurse, was folding a sail when he was struck by the lash of a sheet, slipping into a coma and never regaining consciousness. Malignants, on Facebook, have already dubbed Ichorcoal “the boat of death.”

AN AVOIDABLE TRAGEDY? MAY
In any case, if Sarah had been hooked to a lifeline, perhaps, things would have turned out differently: the terrible episode reminds us of the importance of always tying up, on board, as soon as sea and wind conditions start to get rough. Below is our article explaining everything you need to know about the lifeline, an essential but too often underestimated accessory. 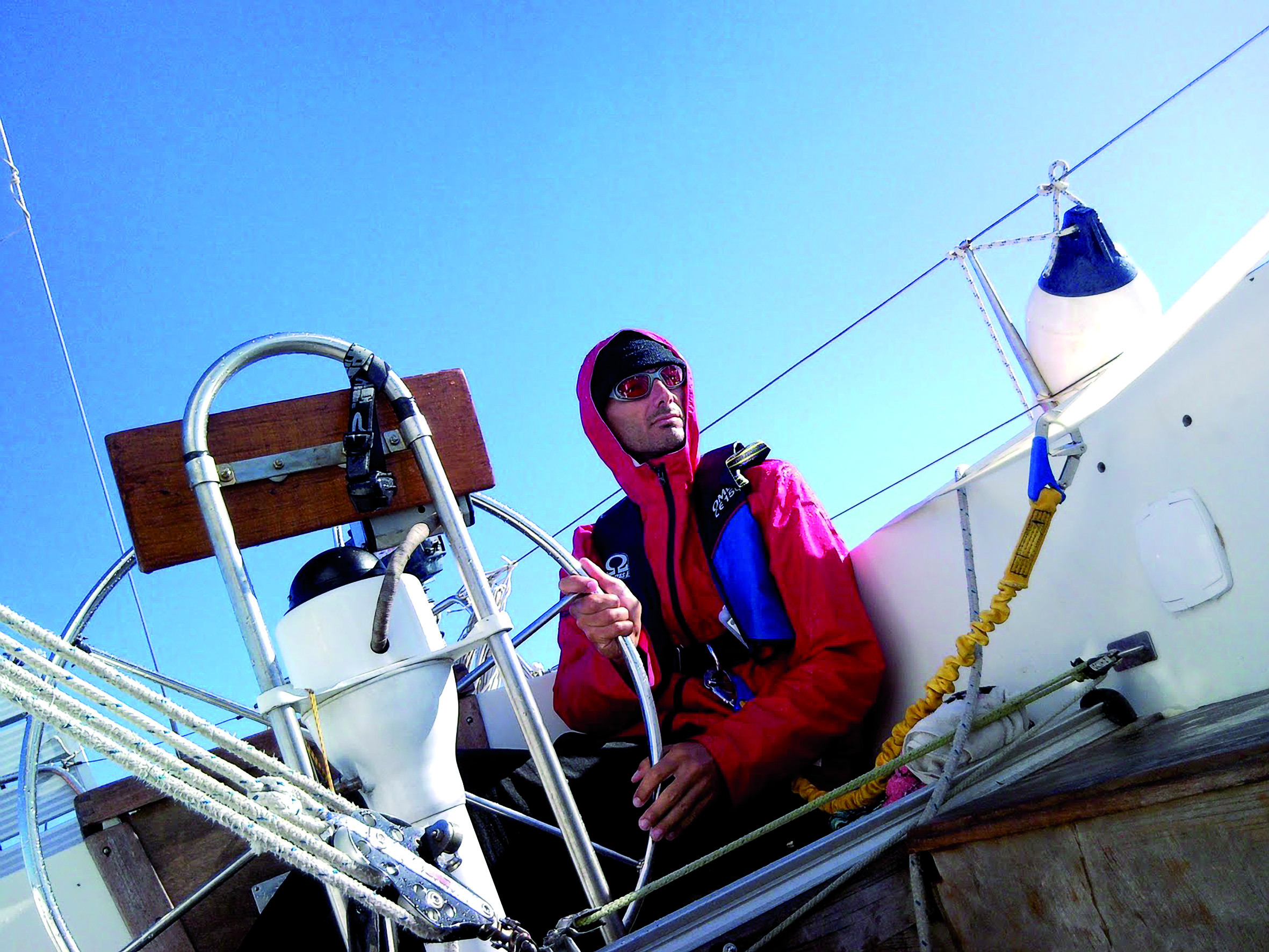 If, in your winter plans, you have decided to continue sailing despite the fact that the cold season may hold adverse conditions and rough seas in store for you, then now is a good time, if you have not already done so, to install lifelines, or at the very least, to check that you have armed them in the correct manner. One of the simplest, yet at the same time most useful, items on board: it is a strap that runs across both sides of the deck, allowing you to move safely on board while remaining tied to the boat via a safety belt, an umbilical cord to be attached to the strap. At one time lifelines were constructed of stainless steel, with the drawback, however, that they were in danger of slipping underfoot, which is why textile straps are preferred today. The installation of lifelines is not complicated; you can easily take care of it yourself, except to take some precautions into consideration. If you are sailing at night, or in rough seas, it is imperative to attach to lifelines via seatbelt even if you remain in the cockpit or if you are on duty at the helm (an unintentional jibe, gybe can put even those in the cockpit at risk of falling overboard). 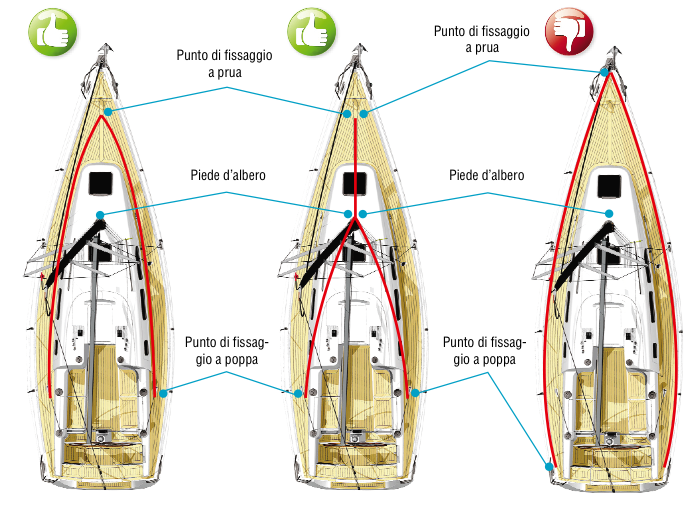 The three drawings above show two correct lifeline arms (the first two) and one incorrect one (the last). The first drawing has a single strap running from the stern to the bow and back to the stern in a single loop that allows the carabiner to never disengage. In the second, recommended for boats with significant beams, the lifeline splits at the mast foot, splitting the passage in two. In the last one, however, the lifelines pass too far outside and do not provide security.

USED BELTS MADE FOR THIS FUNCTION
As a first thing keep in mind that the straps must withstand at least a force of two tons. The most convenient lifelines to install are designed with a wolf’s mouth at one end and are available in different sizes or adjustable depending on the length of your hull.

SECURE THEM ON DECK AT POINTS CAPABLE OF BEARING THE LOAD
The straps must be fastened at their ends to solid points on deck-there are special stainless steel rings attached to counterplates for mounting lifelines, since, like the straps, these fastening points must also be able to withstand loads of up to two tons. On modern category A and B boats, these attachment points are already provided and installed by the shipyard.

RUN THE STRAPS AS INTERNALLY AS POSSIBLE
Straps work best when armed in a closed loop, so that you can safely walk all the way across the deck, from bow to stern, without the need to unbuckle the seat belt and then having to reattach it. In addition, a good tip is to arm the lifelines internally with respect to the fairleads, making them want to pass over the deckhouse as well. It is best to fasten or run one end in the bow at a central point possibly behind the windlass, while the aft ends should be fastened on deck on the fairleads near the beginning of the cockpit. Then, depending on different rigging configurations, the passage may be more or less difficult at the height of the rigging attachment. A second way of rigging lifelines is to separate the straps in two near the foot of the mast, thus dividing the passage from the stern to the bow into two separate stages. The point of attachment from the foot of the mast will be the same but one will run aft on the port broadside and the other on the starboard. This second system is recommended for vessels with a significant maximum beam.

REPLACE LIFELINES ON A REGULAR BASIS.
Like all equipment made of textile material, lifeline straps are subject to wear and tear caused by exposure to UV light and therefore have a limited lifespan. Of paramount importance is to rinse them with fresh water at the end of your outing or cruise, and disassemble them if you decide to put the boat to rest for the winter instead. The advice, if you disarm them, is to stow them in a dry, ventilated environment until the next season. After two years of continuous use or four seasons, it is necessary to replace them by replacing them with new belts.

THE FIXING POINTS
If lifelines allow you to walk safely on deck from stern to bow, it is equally important to have firm, fixed points to which to attach your seat belt in the cockpit and when at the helm. Unless they have been provided by the construction site, you will have to arrange to install these cord attachment points yourself. The best places to install them are near the drop to go below deck and near the wheelhouse. Make sure they are properly mounted, secured to the deck with counter-plates and thus able to withstand a strain of several tons. If you are an owner of a small boat, the advice is to attach a lifeline to the bottom of the cockpit (toward the bow).

SEAT BELTS
The seat belt should be long enough to allow you to stand and move, but short enough to keep you from falling into the water (which is why, we remind you again, it is critical that lifelines be cocked as far as possible amidships). There are two models available, both indispensable: the first about a meter long to wear in the cockpit, the second longer (about two meters) to move around the deck from bow to stern. Then make sure that the carabiner with which you attach to the straps has a safety catch, to prevent sudden and unintentional opening. And remember, never attach yourself to either the shrouds or the backstay, because in case of a fall you risk serious damage to your rigging.

Facebook Twitter Youtube Instagram
PrevPreviousThe 151 Miglia lands in Milan: do you want to participate? Send an email!
NextThe legendary Pen Duick II faces the Atlantic again. At the helm is the fastest man in the worldNext
In evidenza