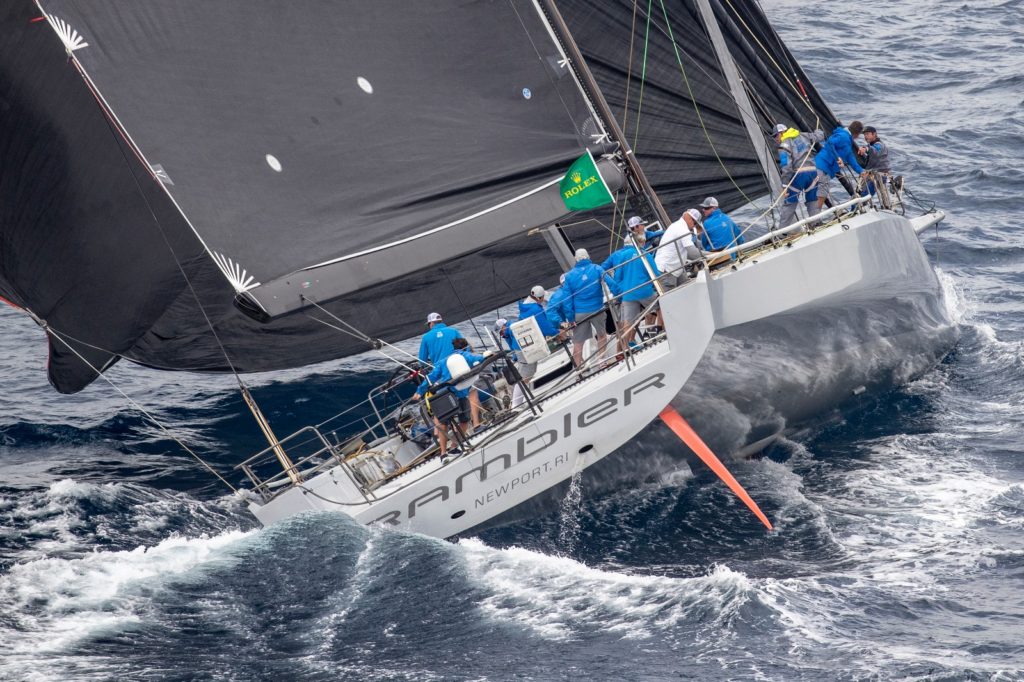 Sixty minutes separated the crew of George David’s Rambler 88 from the record of Esimit Europa 2 of Igor Simcic (14H56M16S) at the Rolex Giraglia. For the American Maxi a bitter sweet line honours for missing by a whisker the record that has stood since 2012…

Rambler, until yesterday favored by dockside predictions-and online tracking-until within hours of arrival was given as certain about capturing the record. The wind, which had always blown fiercely since the start in Saint Tropez, backed off a few miles from the finish, thus slowing its gallop toward Monaco. George David’s Maxi still finished with a time of 16Hrs00M35Sec, crossing the finish line in Monaco at 4:35 am.

After about 40 minutes, at 5:10 the passage for the Wallycento Magic Carpet Cubed. At 5:34 a.m., the Maxi 72 Caol Ila R closed the top trio in real time.
“I was told that the Rolex Giraglia was going to be a slow race ,” George David told the dockside. – I didn’t think so, and my boat, designed for long ocean races, was in its ideal condition. I’m on my first Rolex Giraglia, and missing the record is just one more reason to come back.”
“A magnificent regatta, ” commented Gigio Russo, at the helm of Magic Carpet 3, “in spite of a bad start, we always sailed with very high averages and managed to never stop.

Also on the finish line was Gibian, the 100′ Wally owned by Armando Grandi, 92, one of the doyens of this Rolex Giraglia who said upon arrival,“I’ve done so many regattas all over the world, I missed the Giraglia and I definitely didn’t want to miss it.” On board with him was a reassuring crew composed of Azzurra‘s Senators, led by Mauro Pelaschier from Trieste.

Very fast regatta and equally challenging for all the rest of the fleet, with the majority of them rounding the Giraglia rock within 24 hours. The Mistral wind blew with peaks of 30 knots and formed waves, allowing for a long glide for the first part of the course. Weather conditions forced more than one boat to retire and Aeolus took its toll in terms of breakdowns and breakages and far more than one retirement.

A very uncertain situation for the calculation of compensated times, the expected wind reinforcement could bring with it many surprises in the overall standings, with The ‘little ones’ who, if they manage not to stop during the expected pressure rotation, could climb many positions in the standings.

The 2019 Rolex Giraglia is live at www.rolexgiraglia.com where online tracking of the entire fleet can be followed.

THE ROLEX GIRAGLIA
The Giraglia was conceived in 1953 as a 241mn offshore race. It has since grown and now includes approach races from San Remo and three days of coastal racing in the Bay of Saint-Tropez. In 2019 this classic regatta celebrates its 67th anniversary. The Rolex Giraglia is organized by the Yacht Club Italiano with the collaboration of the Yacht Club Sanremo and, for the 2019 edition, with the Yacht Club de Monaco, the Société Nautique de Saint-Tropez and the Yacht Club de France (on the Saint-Tropez-La Formigue-Giraglia-Montecarlo course).