More SAIL Cup for all: are you ready? 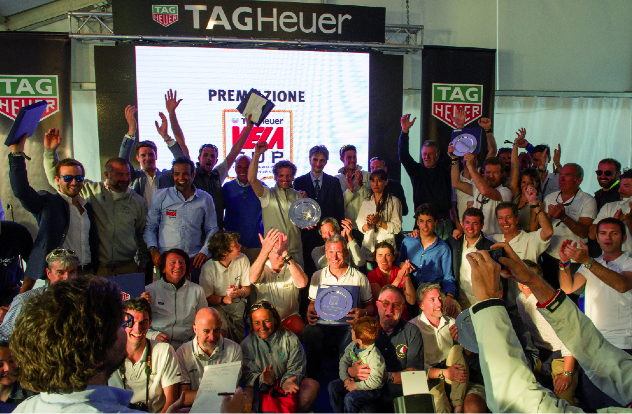 Now in its fourth year, the TAG Heuer VELA Cup goes big and becomes a true regatta/sailing circuit for all enthusiasts. The formula remains the same: boat owners and crews, as well as the merely curious, come together for a weekend-long party at sea and on the dock. A sailing competition among boats of all sizes and shapes, with no age restrictions, no bureaucracy or technical complications, with rankings based on length. And in the evening, party at the dock. However, this year we have great news in store for you to add to this already successful formula.

THE BIG NEWS FOR 2017.
For this year we are organizing a circuit of five events from May to September: May 6 and 7 VELA Cup VELAFestival in Santa Margherita Ligure; June 10 VELA Cup Trofeo Mariperman in Portovenere / Le Grazie; July 8 VELA Cup Venezia Summer in Venice; August 20 VELA Cup Trofeo Formenton in Porto Rafael; September 18 VELA Cup Marina di Pisa. Translated into numbers, it means involving about 800 boats and 19,000 enthusiasts, raffling off 400 prizes to the winning crews in fourteen categories divided according to boat length (seven for the white-sail cruising category and seven for the spinnaker and gennaker racing category), setting up five seaside villages, and finally organizing five parties on Saturday night with awards, food and music. The second big news is that there will be an overall winner (one for the cruising class and one for the racing class) for each event, which will not necessarily be the first-place boat, but, thanks to a secret formula of compensation that puts all boats on an equal footing will be independent of size. Not only the biggest boats, but also the smallest boats will be able to win. In addition, at the end of the five stages of the circuit, the overall winners who took part in the scheduled trials will be decided for each of the fourteen classes. The trophies are Challenge and remain with the winners for the current year. Whoever wins it three times definitely wins it. Likewise, there will also be an overall winner (cruise and regatta) of the total of the five legs taking into account the ranking with the secret formula. So mark all the dates in your diary already, because the more stops you make, the better your chances of winning the Challenge.

The “mother” of all VELA Cups, the one in Santa Margherita (May 6-7, 2017) also has big news in store. Let’s start by telling you that registration is open at www.velacup.it and chand for the first 100 registrants there is a free underwater flashlight offered by Osculati. On Saturday there will be, as there is every year, the “classic” from Santa Margherita to Portofino with an awards ceremony and dock party in the evening. But this year we also thought of those who come from far away and want to go to the water on Sundays as well. It will be an extra opportunity to test oneself in the waters of Tigullio in a combination with a dedicated ranking, including Saturday’s regatta and Sunday’s regatta with final prize-giving. A “litmus test” for the disappointed and for those who just don’t feel like going home and want to enjoy the party and toast to the last.

WHY EVERYONE CAN PARTICIPATE IN THE SAILING CUP

1. OPEN TO ALL TYPES OF BOATS
All boats of all sizes and shapes, no age restrictions, no red tape can participate: no tonnage certificate is required.
2. OPEN TO ALL TYPES OF SAILORS
The more relaxed can participate in “white sails” with a reserved ranking, the more aggressive crews in spi and gennaker racing category.
3. EVERYONE CAN FIND A PLACE ON BOARD
Because if you don’t have a boat of your own, you can rent one locally with your friends or find a boarding place on your own.
4. AN EASY BUT FASCINATING ROUTE
Because the regatta course is simple but fascinating and the starting line long enough for everyone to fit! The regatta lasts no longer than three to four hours and is held on Saturday, so as to encourage participation for all.
5. ENROLLING IS EASY, IT TAKES ONE CLICK.
We sign up as early as now on the dedicated site
www.velacup.it
. Moorings at special prices along the event quay and in nearby ports. Free shuttle service for boats anchoring in the roadstead.

1. SAILING CUP BECOMES A 5-STAGE CIRCUIT
With the confirmation of Santa Margherita Ligure, Porto Rafael in Sardinia, Le Grazie/Portovenere and the inclusion of Venice and Porto Santo Stefano, the VELA Cup becomes a true circuit involving all of Italy.
2. AN OVERALL WINNER
In each of the five stages, an overall winner will be decided, which will not necessarily be the first-place boat, thanks to a secret compensation formula that puts all boats, even the smallest ones, on an equal footing.
3. THE CHALLENGE TROPHY
The overall winners of the circuit will be declared for each class. Trophies are Challenge, they remain with the winners for the current year. Whoever wins it three times definitely wins it.
4.SUNDAY IN SANTA MARGHERITA
On May 7, a special regatta will be held, in addition to the classic VELA Cup on Saturday: it will be the “litmus test” regatta with respect to the previous day’s results with a combined ranking and final prize giving.

SIGN UP NOW FOR THE SANTA MARGHERITA SAILING CUP

PrevPreviousVELA Cup Circuit 2017: 5 dates in 5 sailing paradises
NextVELA CUP 2017: Are you curious to see who has already signed up for the most crowded regatta in the Tyrrhenian Sea?Next
In evidenza