Millevele: it was beautiful (except for that darn gennaker stocking)! 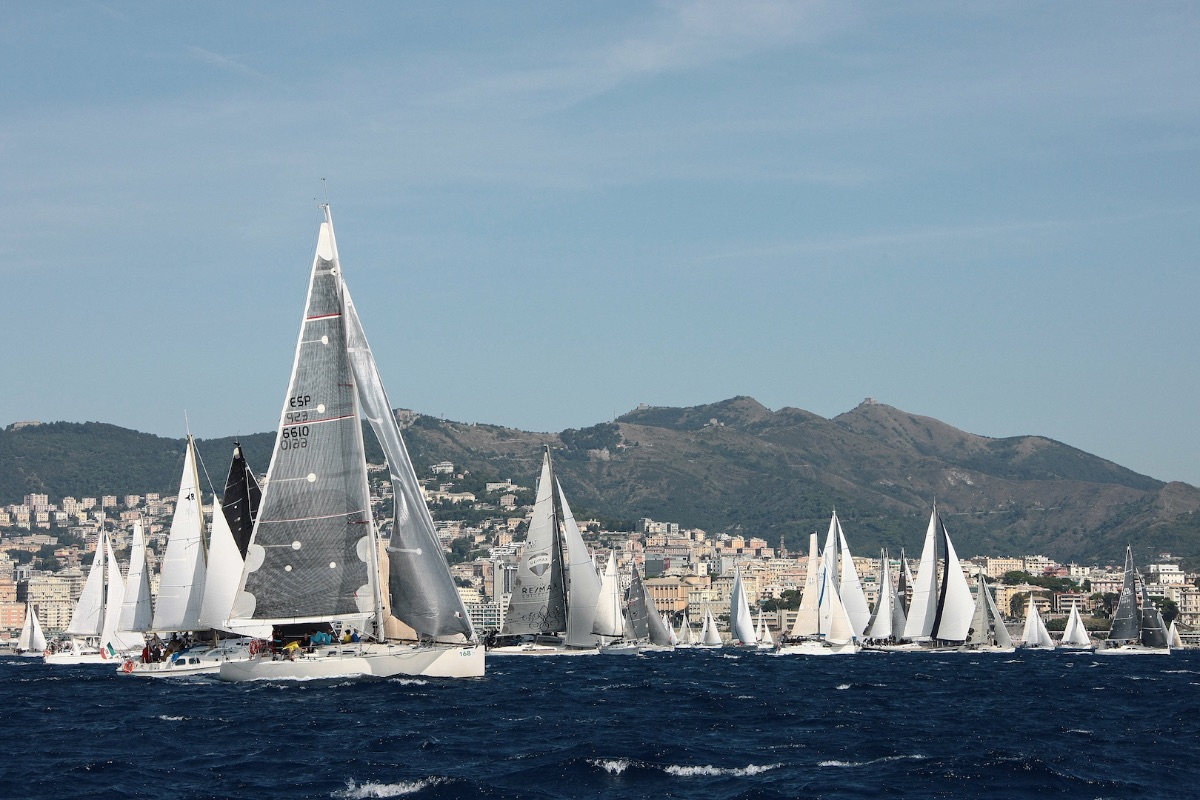 “Poor Daniel, it will be a baptism of fire for him today,” I think as we cast off our moorings from Genoa’s Porto Antico with the Grand Solei 39 Mirit. Daniele is from Brianza, Italy, and has never been on a sailboat-his friend Gianluca decided to take him aboard for the Millevele, the classic Genoa sailing event organized by the Yacht Club Italiano. Small problem: the north wind blows very hard, even at 25 knots. “Ass down, always, and hold on to those things there, if they’re called tientibene there will be a reason!” advises Gianluca. In addition to those already mentioned, my father Lucio (co-owner, retired), Andrea (co-owner, dentist), Marina and Lally complete the crew.

“It’s a sail, it’s a sail, it’s a sail. It’s not competitive,” we repeat to each other in the cockpit like a mantra: we made a pact. No extreme choices, we are here to have fun, as are the vast majority of the more than 180 participating crews, some on more competitive boats, some on old-fashioned cruising hulls. It is not like we are “pulled” like my colleague Tommaso Oriani’s Rodman 42, the Cheyenne, also on the water with the KPMG team on board.

Outside the breakwater, the tramontana comes into its own: close to shore it is very gusty and it is challenging to continually struggle between good and poor and dizzying changes in intensity. But that’s the beauty of it.

We are in the green group, the one reserved for all boats longer than 11 meters: the sailing starts in front of the Lido di Albaro (roughly in front of Boccadasse), there is a buoy to turn off Sori and another at Sturla before arriving at the Foce, just a few meters from the harbor entrance.

The starting line is fixed, there are no disengagement cleats so with the tramontana you start on a left tack with wind at the slack and then head for the sori buoy at 105°. We, unlike the Cheyenne as told to me by Tommaso, author of a perfect start, take it easy, opting for a quiet start close to the committee boat, in the fray but not too much (“It’s a sail, it’s a sail, it’s a sail,” I repeat to myself at the helm). The choice, advised by tactician Gabriel, pays off. We sail well, free and fast, we are abundantly in the first half of the group: bravo Alain Jezequel, after almost 40 years your boat still ‘tares’.

We decide mid-side to hoist the gennaker, because the wind has dropped a little bit: the hoisting with the stocking is perfect, we gasp. We get less giddy, however, when we discover that the buoy, given for 105°, actually seems to be further ashore and a bit closer than expected (even the good Oriani had the same impression): it is time to bear down and prepare for the lowering.

Now, in times of hi-tech smoothies, we have the good old sock. That darn is going to jam. We arrive at the buoy (fortunately inland) along with a myriad of boats. All ready to windward, us with the sock not coming down. Andrea, the bowman, does what he can: he orders us to let go of the halyard. The gennaker comes down hard, as expected, but all in the water. We look like a trawler. Moreover, we are tacking to the left, and those downwind are yelling at us that they would like to tack. “It’s a sail, it’s a sail, it’s a sail,” we shout: as if to say, “come on guys, parade us out from underneath and don’t break us, can’t you see we’re in trouble?” Somehow, after losing at least a dozen positions, we manage to get back on the bubble. Getting to the Sturla buoy is all in all easy, upwind but working a lot of gear and mainsail, then we cross the finish line at the Foce. It was a very short sail, not even an hour for us “cruisers.” Imagine for the Kauris II with Torben Grael at the helm, first in real after only 35 minutes.

We finished in the middle of the standings. Not bad, since we did everything to get to the back of the line! Eighteenth in category (out of almost 50 boats): finished the regatta I call Thomas. We didn’t even see him; he and his crew with Cheyenne finished in second place. Envy? I didn’t have time because once the line was cut already towering over the focaccia in the cockpit, awash in white wine!

HERE ALL THE RANKINGS OF THE MILLEVELE