These days Lorenzo Bressani, a.k.a. “Rufo,” has been the talk of the town because he was among the absolute stars of the Miami leg of the Olympic Classes World Cup, on the Nacra 17, with new bowwoman Caterina Marianna Banti. From Trieste, class of 1973, he is indeed a very strong sailor who almost came close to winning the World Sailor of the Year put up by ISAF (the International Sailing Federation, now World Sailing), for a feat that will remain in the annals of sailing: three world titles, between Melges 24 and 32 in less than a year, between 2010 and 2011. We in any case had elected him as Sailor of the Year in “times not suspected,” in 2002. 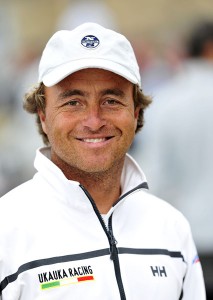 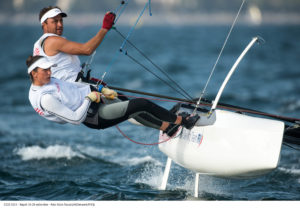 A multifaceted and tireless sailor, he also had the strength to challenge himself in the Olympic classes with the Nacra 17, first with Giovanna Micol (Giulia Conti’s former bowman) then with Caterina Marianna Banti, with whom he is doing very well internationally. 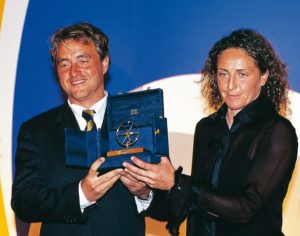 WHAT WE HAD WRITTEN ABOUT HIM IN 2002
Taken from the April 2002 Journal of Sailing. In his second nomination among the finalists for The Sailor of the Year award, Lorenzo Bressani won the 2002 edition of the Golden Helm. During the awards evening, now in its 11th year, a large audience of journalists, sailors and sailing enthusiasts warmly approved the Jury’s choice. And who better than Alessandra Sensini, winner of the trophy last year and in 1996, could award the triumphant winner. An auspicious handover then for the Trieste sailor, who had already received a nomination in 1998 and had an outstanding racing season this year. A unanimous decision, that of the Jury, which confirmed the work that every year the editorial staff of Il Giornale della Vela does in selecting and carefully analyzing the five finalists; in addition to Bressani, Flavio Favini, Luca Valerio, Elisabetta Saccheggiani and Gabrio Zandonà had been nominated. And just so Lorenzo, the next morning, commented on this award.

“After two nominations this year, I felt I was among the favorites. I knew, however, that the other candidate for the Golden Helm was Favini, who is a well-known name in offshore sailing and did very good results last year, maybe less than I did but very good quality. I was fortunate enough to do the IMS season with the 40-footers, while he did the 50-footers, which count a few boats but of the highest level. He therefore had a very good chance of taking the prize as well. I was quite nervous, I felt I was on the ballot with him to the very end. This season of mine I consider to be one of the best because (I won in the offshore and one-designs, but also in 1998) I had won several victories in dinghies as well. Winning with offshore boats and dinghies is a strange thing, and for that very reason I perhaps consider it the best season for me. Also because the first victories came, so I remember it as a special year. One of my virtues in the 2001 season was to keep the tension high throughout the season, which is precisely why I was able to win at Alassio, the opening race, and at the Italian in Naples, the last race.

My feeling last year was that I was, quote-unquote, unbeatable. Don’t get me wrong, it’s not a blowhard feeling, is when you feel confident, you are always focused, and you never lose your mind even when you maybe get off to a bad start or there is a wind shift against you. In some regattas I made big recoveries, and some were incredible. In sailing then it always takes a little luck as well. You can predict everything in a regatta, but all it takes is one wind shift and you’re behind. I think that even the most experienced helmsman can predict are up to a certain percentage changes in the weather conditions of a race course. His skill is to remedy setbacks as quickly as possible.

In the future, to complete my career, I would like to participate in a Volvo Race and the America’s Cup. The former fascinates me because of the difficulty of the weather situations that one encounters in the event. For the America’s Cup at the moment I don’t feel ready also because I have no experience in match racing. Definitely in a few years, and after gaining more experience in the high seas, it will be one of my goals. I think the Jury made a fair choice in awarding the prizes. Cossutti made a formidable boat that won the Barcolana this year in a big way. German Frers and Alessandro Vismara designed some nice boats but perhaps leaned toward more cruising hulls. As for Brava Q8, it is now a winning brand and voting for it is never wrong. A three-year-old boat, she won a world title in one of the most difficult classes. They did well, but the boat showed that it is still current and fast.”

Facebook Twitter Youtube Instagram
PrevPreviousSailor of the Year, -3 days to go. We explain how voting works. Are you ready?
NextSailor of the Year, record “turnout”: 3,000 votes in a few hours: and the most voted for is…Next
In evidenza