Lake bombshell ready to win it all (with “seasoned” skippers)

“I remember that modified Melges 30, Paola. He was winning every regatta on Lake Maggiore, keeping up with him was impossible. At least for me and Tiziano (Nava, ed.), on my Brenta 38: a beautiful daysailer not suitable for ‘racing.’ So we set out to find a boat fast enough to play for it.” Speaking is Piero Re Fraschini (58), owner of Eligio Re Fraschini SPA, which produces composite parts for supercustomers (Ferrari, Groupama for the America’s Cup among others).

A “LABORATORY” BOAT
After engaging one of Italy’s most famous designers, Claudio Maletto, on the strength of his experience with Luna Rossa, and discarding the idea of buying an Ace 99, Re Fraschini and Nava found the right boat in Monfalcone: it was Longobarda, Bruce Farr’s old Ultimate 30 built by the Garda shipyard Dal Ferro: “This boat, designed in 1990, had been adapted to run the Barcolana,” explains Re Fraschini, “it had the dredges and a large spoiler at the stern, to have the proportions necessary to participate in the Trieste event. Well, all this was not needed by us and we started with a ‘total cleaning’ of the deck.”

Only the carbon hull, “ideally shaped for racing in medium-light winds,” has remained the original (the fin will soon be replaced by a new blade with reduced draft) and the boat, now called BandaLarga (almost an anagram of Longobarda), has become a sort of “workshop” at Cantiere Lavazza in Brebbia where people like Giorgio Provinciali, Dado Castelli, Luciano Lievi and Marco Di Natale have put their hands on it, in addition to Nava and Maletto. Only goal: to make it a rocket “and above all to have fun,” Piero points out. 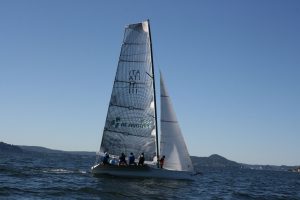 In order to increase speed, the shaft was first worked on: “We replaced the old aluminum profile, which was very flexible, with a shaft made of high-modulus carbon fiber.”, Claudio Maletto explains, “We wanted it light and rigid on the basis of our experience with the Libera Class: in strong winds, it is better to reef the mainsail (a maneuver we facilitated by inserting a rail with trolleys for luffing the mainsail instead of the classic luff) rather than using the mast bending to change the sail shape.” 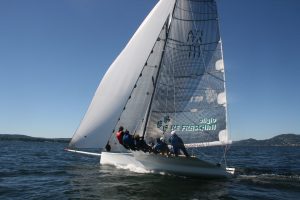 THE INCREASE IN LOADS
The new mast (157 mm the longitudinal dimension, including the mainsail luff rail footprint, which is reduced to 104 in the tapered one), is associated with a low-extension sail plan, which allowed an increase in sail area without increasing the total length of the mast compared to the previous one. The sails are made of mixed Kevlar and carbon laminate, designed by Dado Castelli and made by Marco Pomi of Elvstrom. “Since these boats achieve maximum speed by exaggerating the righting moment,” Maletto continues, “we equipped the boat, already very wide because of its stiff wings, with six trapezoids, consequently the loads on the mast are increased.” To make it easier for the crew to maneuver, they opted for a mid-cockpit winch from which to work on halyards and sheets. Also due to the increased loads, all the boat’s focal points (mast foot, forestay heath) were properly checked and where necessary, reinforced. Another detail that jumps out at you is the so-called TPS (short for tack point of spinnaker, in IMS parlance), which is the distance between the mast and the tack point of the asymmetric: it measures an impressive 7.64 meters. “This is thanks to a 4.44-meter retractable bowsprit,” Maletto explains-a solution that allows the sail plan to be exaggerated at the carriers. Finally, a hydraulic cylinder was applied on the forestay to tension the rigging since the mast is rigged with two orders of spreaders angled at 30°. 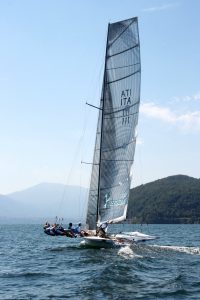 GOODBYE, LAKE MAJOR!
But at the end of the day, we ask Re Fraschini, all this America’s Cup engineering work (by the way, the mast was designed by Francesco Pelizza’s engineering firm AMS and built with the know-how of Eligio Re Fraschini SPA) Has it paid off? “And how! Upwind we reach 8 1/2 knots, and downwind, in medium winds, we touched 16 knots.”. Now Lake Maggiore is starting to get a little tight for BandaLarga: “In fact, we plan to get out of our home waters,” declares the owner, “and take part in the Centomiglia and Gorla on Lake Garda, maybe the Bol d’Or Mirabaud on Lake Geneva. But always with one and only one goal: to have fun and go fast. The moment we race to win, I’m sure we would only end up getting rotten blood.” 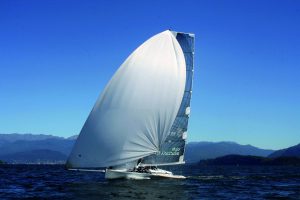