Italy’s best at European J/70: “I celebrated my birthday by gliding”

Boats all the same, no compensated times, zero chance of rating “wizardry.” In one-design classes, the best wins. And that is why the most competitive, race-minded sailors love them.

J/70, in 88 at the European Championships in Hyeres

One of the most successful monotype classes is certainly the J70: witness the 88 boats that took part in the last European Championship, in Hyeres (France).

Seven hard-fought trials with crews from all over the world, including non-Europeans, saw the British crew of Calypso triumph ahead of the Americans of Rowdy and the Turks of Eker Kayak (first among Corinthians, i.e., without professionals on board).

Here is what Acinapura told us, “Last week I celebrated my 36th birthday by giving myself the gift of participating with a top team in the J/70 European Championship in Hyères.

A gift a little different than usual, because the outcome of a regatta is never a foregone conclusion. A beautiful memory but also a real satisfaction that is the result of passion and many sacrifices. With a cool mind, after a week of reflection, I cannot deny that I had a good time, on a very difficult race course, under extreme wind conditions that led us to some crazy glides!!!

If I had to draw a summary of these past 365 days, it has been a very joyous and fulfilling year for me. This result in Hyeres is definitely part of it… The result is to be framed, but we still have plenty of room for growth. After a not-too-aggressive start, we strung together a series of positive top ten results. Unfortunately, the weather was not kind, and the strong mistral on Friday and Saturday allowed us to have only one trial with gusts over 30 knots.”

European J/70, the other Italians

What are the secrets of its success? First and foremost, a well thought out hull in terms of affordability–and physical. For example, the cost for a used boat ready to race (so with dacron sails – laminated sails are banned by regulation – and a trolley for transport), indicatively, is around 30-35 thousand euros. These are lower figures than monotypes of the same range. But it is also possible to charter boats by renting them for the season.

The fact that it is slightly underpowered makes it less challenging and within the reach of even those with a few years on their shoulders, and in three it is easily led (although the ideal crew is four people). 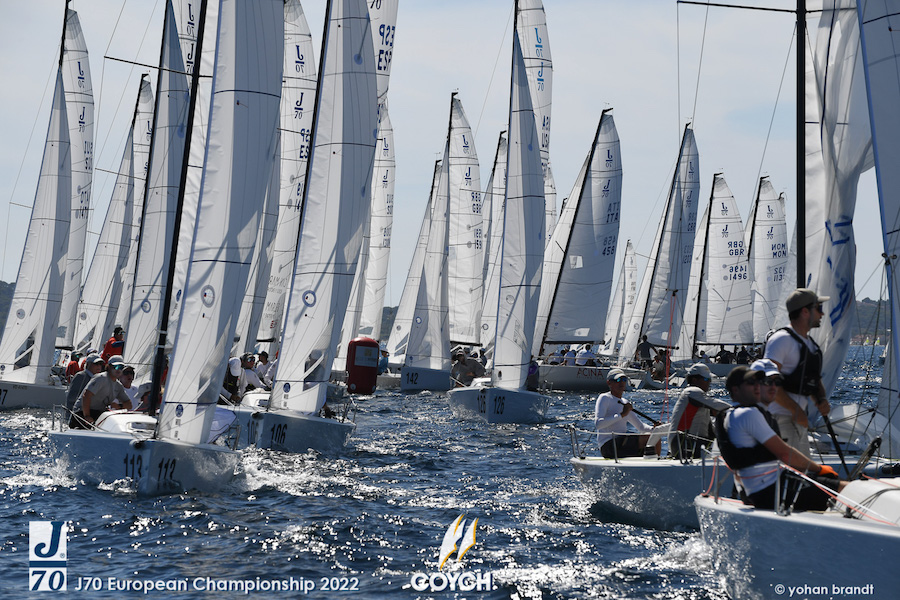 The J/70 is not a “big drift,” but a small cabin cruiser-an important feature that contributed to its success. It is easy, it is a very seaworthy and “forgiving” boat, it is fun, and it has a well-organized and followed circuit in Italy. And, last but not least: it allows anyone to race against champions: the international J/70 circuit has seen names like Paul Cayard, Francesco De Angelis, Hugo Rocha just to name a few.