Italians return to America’s Cup (but on the RS Feva)

As part of the outline activities for the 35th America’s Cup, which will be held in Bermuda next June, the organizing committee has convened a youth championship (up to age 15) for national representatives called the “America’s Cup Endeavour.” the championship will take place in Bermuda right during the America’s Cup races, to which it will serve as an interlude, and will be contested over three classes.

Among them, the monohull double will be the RS Feva, which thus reaffirms its now leading role in youth sailing. The selections of country representatives, by the international class with the support of the national classes, took place during the end of 2016. With the exception of Great Britain and Bermuda itself, which will have 3 crews each, each of the other countries (Italy, Australia, Canada, Guatemala, New Zealand, Norway, Sweden, Switzerland and the U.S.) will be represented by one crew.

TWO ITALIAN CREWS TO CONQUER THE “CUP”
For Italy, the selected crew consists of Francesco Ferri (Circolo vel Sarnico) at the helm and Alvise Colledan (Circolo Nautico Brenzone) as bowman. The Italian presences do not end there, however: two other Italian youngsters, Arturo Beltrando at the helm and Ubaldo Bruni (Francesco’s son, engaged in the Cup with the Swedish Artemis team) bowman have in fact been selected to represent Switzerland. The regattas will take place from June 13 to 18 and will be partly streamed. The other classes selected for the America’s Cup Endeavour are theO’pen BIC for single monohull and theHobie Wave for double catamaran. 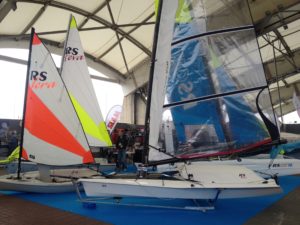 RS FEVA
This best-selling model in the polyethylene dinghy line is produced by the British shipyard RS Sailing. The class is recognized by both Isaf (International Sailing Federation) and the national Federvela, which has included it in the Under 16 project for youth training. Rs boats are imported to Italy by BoatTech, a company based in Brenzone (at 11 Zanardelli Street) on the Verona side of Lake Garda. It is a fast dinghy also equipped with a 7-square-meter gennaker, 3.64 meters long. Easy from the start, requires minimal maintenance and has an interesting regatta calendar in Italy as well as internationally. The price of the drift is 4,863 euros + VAT. www.boattech.it 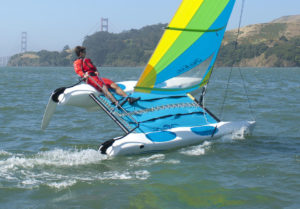 HOBIE WAVE
The Hobie Wave is designed specifically for beginners, families and the very young. It is easy to rig, easy to maneuver and easy to disarm, these features make this colorful 13-foot catamaran so immediate that it almost sails itself! Even beginners and children with this boat will have no problems whatsoever. The price for a boat ready to sail is 7,127 euros. www.bolsenayachting.com 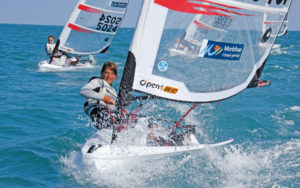 Created as an alternative to the Optimist, the Open Bic features a 2.75-meter, planing and very fast hull inspired by modern skiffs constructed of durable polythylene. It is designed for athletes up to 60kg and approved up to 90kg. A 100% self-draining sump that allows kids to be autonomous. This is a boat with very few adjustments that is very easy to drive and most of all fun. Built and disseminated by BIC Sport, a leading water sports company also present in 70 countries. The price is 2,207 euros. www.bicsport.com