I want to navigate in the footsteps of famous people / 2

Often the myth of a place is created by the caliber of the person who tells about it and has experienced it. Set sail with us on a two-part journey to destinations frequented by great men. Writers, musicians, captains of industry, brilliant scientists: Everyone had a place of the heart to navigate. Waiting for you.(FIRST INSTALLMENT HERE)

BERNARD MOITESSIER – “POLYNESIA SAVED MY SOUL.”
No one more than Bernard Moitessier has been able to inspire generations of “romantic” oceanic sailors, helping to create the myth of Polynesia. It is 1968, the Frenchman is retiring from the legendary Golden Globe, the solo round-the-world voyage, having sailed 37,445 miles in 343 days, despite being in the lead, and is heading for the islands : “I lodge a complaint against the modern world, it is the monster. It destroys our land, tramples on the souls of men,” he writes in his diary. “I’m going to Polynesia to save my soul.” 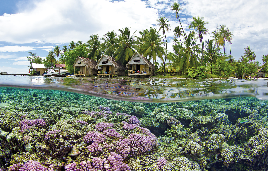 An ante-litteram ecologist, in 1975 he decided to build a house with his own hands on the tiny atoll of Ahe in the Tuamotu Islands. In this earthly paradise, man is free. Tahiti, Cook Islands, Tonga, Marquesas, Tuvalu, Easter Island, Samoa: at least once in a lifetime, a sailor should call there to understand the meaning of Moitessier’s words.

J.F. KENNEDY – THE PRESIDENT’S SENSE OF THE OCEAN
U.S. President John Fitzgerald Kennedy’s passion for sailing dates back to the age of 15. The eight-meter Victura, with which young John took his first sailing steps among the beautiful scenery of Hyannis Port, Massachusetts, was a birthday present from Papa Joe and Mama Rose. Built in 1932, John used Victura all his life, even making his partner Jacqueline (pictured above) appreciate it. 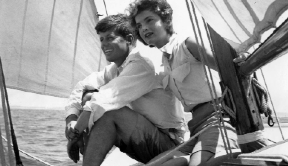 He had many boats, including the 19-meter Manitou, the 22-meter twin-shaft Royono, Flash II, a Star aboard which, together with his brother Joseph, he took great satisfaction. But as soon as he could, he would return to Hyannis Port to tack on Victura. Only with her did he feel in touch with the ocean.He once said, “We all have the same percentage of salt in our veins that exists in the ocean. We have salt in our blood, in our sweat, in our tears. We are connected to the ocean. And when we go back to the sea, to race or just to watch a regatta, we go back to the place we came from.”

GEORGES SIMENON – HIS SECOND HOME? PORQUEROLLES
“Georges,” says Tigy, Georges Simenon’s young wife, “I found the little vacation spot for us. There is a little island opposite Hyères called Porquerolles. Shall we go there?” The Belgian writer, then not yet famous (this is 1926, the character of Inspector Maigret had not yet been created) got an advance of two thousand francs from his Paris publisher and moved to the island. He would spend long periods there (until 1938) in a villa, Le Tameris, right by the harbor.

He became friends with local fishermen and fell so much in love with the sea that in 1934, as he recounts in his “The Mediterranean in Goletta,” he sailed with his wife aboard the brig l’Araldo towards the Tyrrhenian Sea. Today Le Porquerolles, despite its fame attracting thousands of tourists, still retains the wild splendor of the era and especially for us Italians it is a destination that should not be missed. Who knows, inspired by Simenon, you might be able to churn out a blockbuster detective story?

JUAN CARLOS DI BORBONE – REGATTAS IN THE BLOOD, MALLORCA IN THE HEART
Juan Carlos of Bourbon, former ruler of Spain, is a regular on the race courses. In 38 years (from 1973 to 2011) fifteen hulls were built under the name Bribon, all for Catalan shipowner Jose Cusì and his trusted helmsman, King Juan Carlos. In 1972 he participated with his Dragon Fortuna in the Munich Olympics, in 1999 he won the European IMS in Punta Ala, and in 2000 the Copa del Rey. Not only that, he also risked a shipwreck in 1989 on Lake Garda.

The former monarch (who we recall was proclaimed king in 1975 following the death of Francisco Franco) is a real sea dog. A sea wolf who has his lair in the Balearic Islands, Mallorca, where Juan Carlos has spent all his summers since 1973 in the family villa nicknamed Marivent (Catalan for Sea and Wind) in Cala Major, a residential neighborhood in the capital Palma. And from there he enjoys sailing along the island’s coastline, characterized by bays and coves with crystal-clear blue waters.

FABRIZIO DE ANDRE’ – IN GREECE AND TURKEY IN SEARCH OF THE RIGHT SOUND
The great Genoese singer-songwriter Fabrizio De André, Faber, to his friends, loved to travel. Especially in the latter part of his record production, from “Creuza de Mä” to “Nuvole,” the musical influences from distant countries are so evident that these records can be categorized as absolute masterpieces of world music (just think that David Byrne of Talking Heads included Creuza de Mä among the ten most important records of the 1980-90 decade worldwide!). 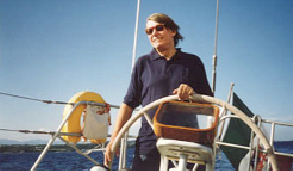 Prior to “Nuvole,” De André bought a sailboat (which he christened Jamin-a, after the 1984 song he wrote for an Algerian friend) and embarked on a two-and-a-half-month sail around the islands and coast of Greece with singer-songwriter and friend Mauro Pagani. This very rare photo shows him at the helm in 1986; unfortunately, we do not know what boat it was. The trip was supposed to be much shorter, but the two songwriters went as far as the coast of Turkey, in search of the Mediterranean sounds and colors that later characterized the last period of De André, who passed away in 1999.

GIORGIO FALCK – COULD ONLY LOVE A TEMPLE OF SAILING
The place that has had the most significance in Giorgio Falck’s life as a sailor, a protagonist of regattas on all the seas of the world, is surely Cape Town, in the Republic of South Africa, one of the temples of international sailing.

From there he departed in 1976 for the Cape2Rio (from the African city to Rio de Janeiro, Brazil) aboard the Guia III (side photo): in addition, Cape Town was an intermediate stop on two Whitbread (round-the-world sailing trips) in which the Milanese industrialist took part, in 1973 on the Guia I and in 1981 on the Rolly Go. Falck’s South African passion is also betrayed by the name given to one of the daughters he had with Anna Cataldi, Jacaranda: it is the name of a beautiful violet-colored plant spread throughout the nation…