How do you read polars? A super expert explains it!

You know those hieroglyphs you glimpsed while flipping through a boat’s papers? Those circles filled with intersecting colored lines and seemingly incomprehensible numbers? Well, rest assured, those are the so-called “polars.” They are basically used to describe the performance of the boat as a function of wind strength and direction. If you think, however, that this is just “designer stuff,” you are sorely mistaken. In fact, they are the best method of defining the targets your boat is capable of reaching under different conditions. We asked one who knows a thing or two about polars (and especially about speed) to explain its secrets to us: Matteo Polli, a young Italian designer, from whose pencil came, among others, the Italia 9.98, winner of this year’s ORC world championship.

WHAT ARE POLARS AND WHAT ARE THEY USED FOR?
Polars are the curves describing boat performance drawn on a polar-type graph (hence the name) as a function of real or apparent wind strength and direction. Each set of curves represents a particular sail configuration, e.g., mainsail and jib for upwind sailing rather than mainsail and spinnaker for upwind, and is composed of individual curves related to various wind strengths. Polars are very useful for studying boat behavior at the design stage but also later for defining sail targets and crossovers.

WHO IS IT THAT USUALLY USES POLARS?
The first to use polars are precisely the designers for the purpose of comparing design variations, but of course sailors also benefit particularly sailors, helmsmen and sail trimmer as they are involved in making the boat achieve maximum performance. Generally, in boating it is more convenient to use polars in tabular numerical format, which is more commonly called a target table.

ARE THEY NEEDED BY A NON-RACING SAILOR?
Polar charts are not only useful to racers but to anyone sailing on a sailboat as they are useful for route planning.

IF YOU CAN’T REACH THE VMGS INDICATED BY THE POLARS, SHOULD YOU BE WORRIED?
Normally, polars are the result of the sophisticated calculations that performance prediction software (VPP) makes, so these are theoretical calculations that for various reasons may not exactly agree with reality. In addition, the on-board electronic instrumentation may not be very accurate or well calibrated. These factors can also lead to large discrepancies between the numbers you read on the instruments and those in the target tables (VMG).

IS THERE ANY STEPS TO FOLLOW TO VERIFY POLARS WITHOUT MAKING MISTAKES?
The procedure for verifying and, if necessary, correcting the theoretical yard polars involves, first, calibrating the electronic instrumentation on board to the best of one’s ability and then sailing to the best of the boat’s ability at various gaits and with various wind strengths by recording navigation data or simply noting instrument readings, particularly wind angle and boat speed, to be compared later with polar plots.

IN-DEPTH STUDY. THE POLARITIES OF ITALY 12.98
Associated with the polars are charts that you can take with you on your boat to try to set up your boat in the best possible way. In the specific case below are the charts for the new Italia Yachts 12.98, another project by Matteo Polli. TWA: True Wind Angle. BTV: Boat Speed. VMG: Optimal one-point approach speed. AWS: Apparent wind speed. AWA: Apparent Wind Angle. Heel: Skidding angle. Reef: Coefficient of sail area reduction. Flat: Coefficient related to the depth of the sails. 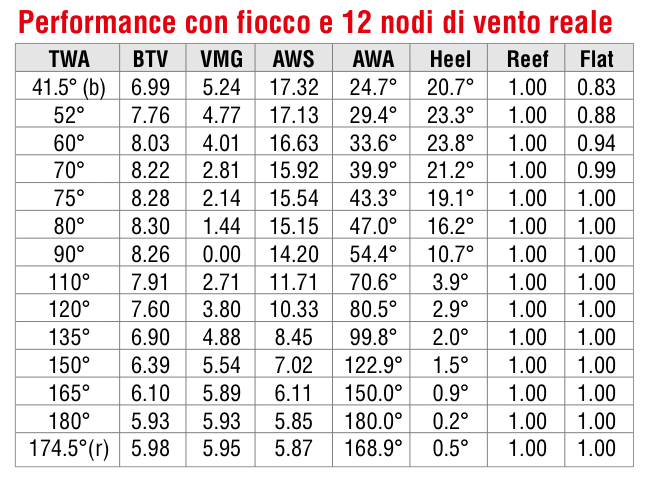