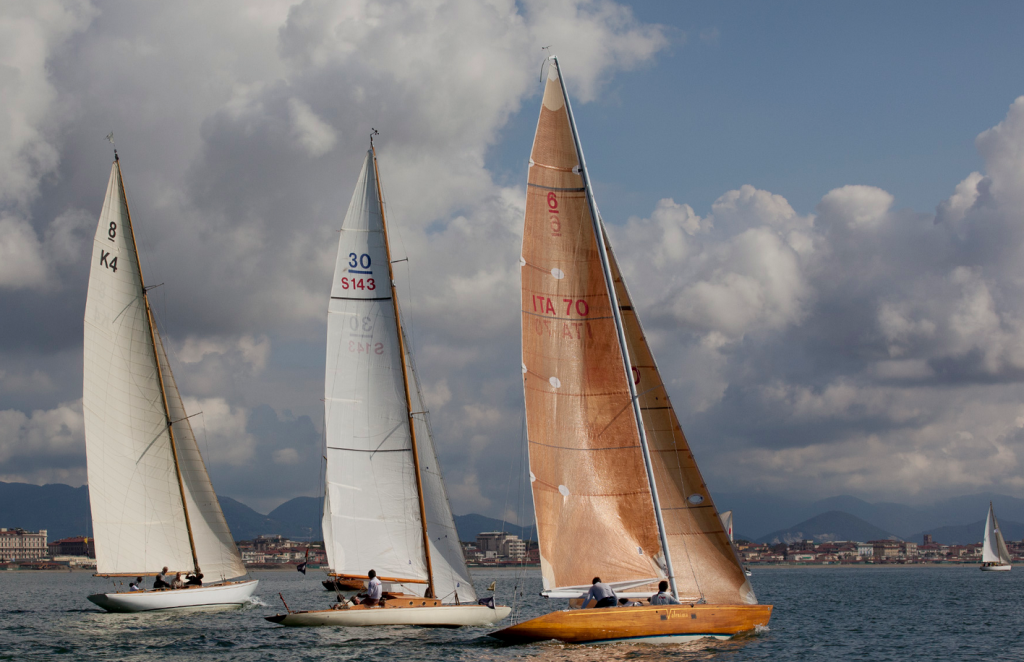 A good show the 11th edition of the Viareggio Historic Sails Rally, organized by the Viareggio Historic Sails Association in cooperation with the Versilia Sailing Club. About 50 vintage and classic hulls participated in the event. Valentina, a 1975 Pavese family boat, won the overall, category and Sangermani Trophy, reserved for wooden hulls built by the famous Ligurian shipyard. The prize? A ham weighing 10 kilograms. 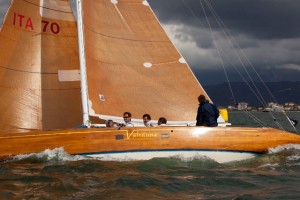 SUPER VALENTINA
And to think that in 1982, when it sank 240 meters deep during a regatta on Lake Geneva, it seemed permanently lost. In contrast, the 11-meter Valentina (ITA 70), built in mahogany and oak in 1975 by the Ligurian shipyard Sangermani to a design by American Gary Mull, has been salvaged and since 1997 has belonged to the Pavese family of Milan, which has had her compete and win in countless regattas. He was no exception this year, when he won the real time and category standings at the 11th Vele Storiche Viareggio Rally. For her, in addition to a 10-kilogram PDO Tuscan Ham, also the prestigious Sangermani Trophy, delivered directly from the hands of Cesare Sangermani who spoke at the award ceremony. The boat, rigged as a Bermudian sloop, belongs to the 6-Meter International Tonnage class, a category of racing hulls that emerged in the early 1900s. The crew consisted of Luigi and Filippo Pavese, helmsman and mainsman respectively, tailer Filippo Domenicali, and bowman Luca Ambrosini. Valentina, favored by light airs, won all three races. 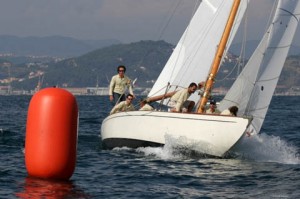 ALL WINNERS
In real time, Valentina’s direct pursuers were the 8-meter International Tonnage Bamba of 1927 owned by Guido Tommasi of Milan, back on the water after a four-year restoration carried out by Cantiere Pezzini of Viareggio, and Tilly XV, the Sonder Class of owner Siegfried Rittler armed with auric sloop. Also present was the Capricia school boat, a 1963 Bermudian yawl donated in 1993 by lawyer Agnelli to the Navy. In the compensated time rankings, made possible through collaboration with AIVE (Associazione Italiana Vele d’Epoca), the final victory in the ‘Classiche’ grouping went to the 11-meter Namib, a Bermudian sloop launched in 1966 by the Sangermani shipyard, which preceded Chin Blu III (1965) and Madifra II (1974). Among the ‘Epochs’ affirmation of the historic auric cutter Vistona of 1937, followed by Ilda and Margaret, an 8 Meters International Tonnage of 1925. Shipowner Gian Battista Borea d’Olmo was awarded a ‘voucher’ for a free launching and hauling at the Marina di Scarlino.

THE HISTORIC SAILS TROPHY AND ALL THE PRIZES
The Viareggio Historic Sails Trophy this year was awarded to two boats: to the Tilly XV, built in Germany in 1912 for Prince Heinrich Von Preussen, brother of Kaiser Wilhelm II of Prussia and at the Vistona, with a special dedication to Luca Sonnino Sorisio, the young editor of Nautica magazine, who recently passed away. In fact, her owner Gian Battista Borea d’Olmo, for many years director of the Porto Rotondo marina, joined the magazine and the Yacht Club Costa Smeralda in organizing in 1982 in the waters of Porto Rotondo and Porto Cervo the first gathering for vintage yachts in the Mediterranean, which in its subsequent editions saw the Vistona among its protagonists.

Among the many awards given were those to Cantiere Del Carlo, the Viareggio Harbor Master’s Office and the Versilia Sailing Club chaired by Roberto Righi. The “Amerigo Vespucci at Home” Committee, on the other hand, awarded the 1966 Nausicaa of Harwich boat for more than 3,000 miles sailed in the Mediterranean this year. The 1964 16-meter Namar was awarded a weekend at the Plaza e de Russie Hotel in Viareggio. The Maria Grazia Cioni award, given to the crew who best demonstrated attachment to the boat as if it were part of their family, was given to the Swiss Laimberger Brizzi family, owners of Trilla, a Star-class drift built in 1961 by Abeking & Rasmussen and restored in-house. Two major prizes for Patience of 1931, that of Il Bisonte for the most elegant boat as well as a free month’s mooring offered by the Marina di Scarlino and Camper & Nicholsons Yachts. Both launched the idea of a vintage boat regatta to be held at this location in 2016. The 1947 artist-navigator boat Captain Lipari received a vintage survey compass from Azimut Investments, like those once used by Royal Navy cadets. The eight women crew members embarked on Enrico Zaccagni’s 1935 Oenone, former president and current Commodore of Vele Storiche Viareggio, enabled her to win the Rose Barni award for the highest ‘pink quota’ hosted at regattas.