Gaetano Mura Around the Globe: the Sardinian sets off on a world tour! 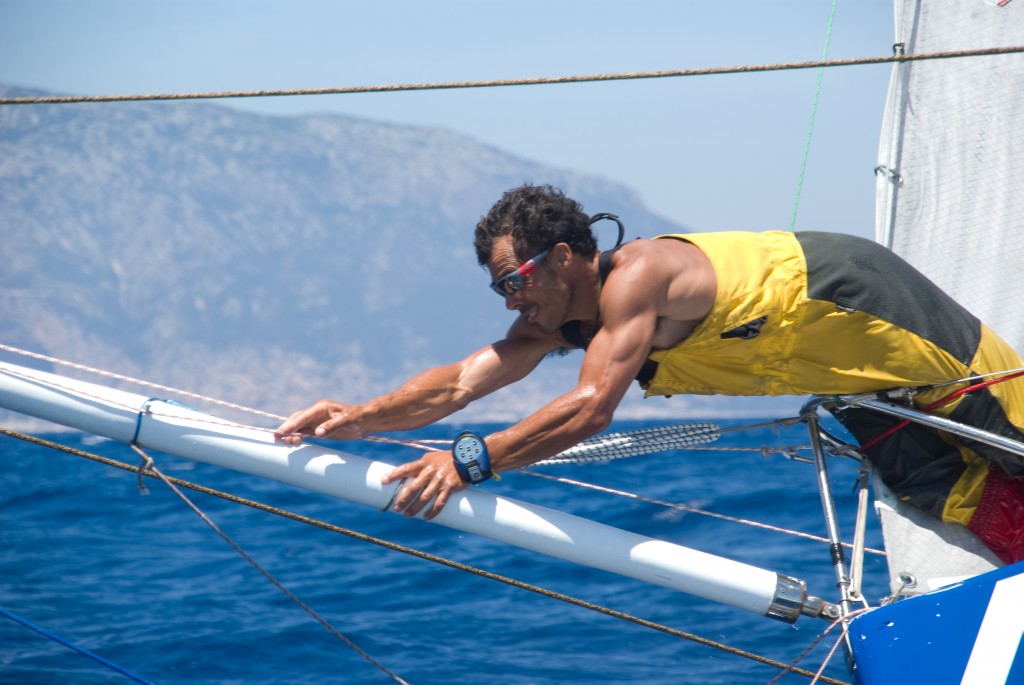 “If I complete this feat, it will already be a record.” He’s right, Gaetano Mura: the Sardinian ocean sailor (born in Cala Gonone 48 years ago) is preparing to sail around the world solo nonstop aboard a Class 40 (designed by Sam Manuard). But the competitive verve, Gaetano, lets journalists handle it: “My round-the-world race and the one completed by Guo Chuan (the Chinese who in 2013, on a Class 40, had completed the circumnavigation of the globe in 137 days) are very different. He had set out from Qingdao, I will drop my moorings from Cagliari: his round trip was 21,600 miles, mine will be over 25,000.” Record or no record, it is still the feat of a lifetime: “If not now, I said to myself, when? I’m not a kid anymore. And I realized how difficult it is nowadays to be able to raise the funds to make it happen.” In this Gaetano is in tune with his namesake Andrea: “We rarely agree on anything with Andrea Mura,” he jokes, “but in this case he is absolutely right. The first difficulties of such a challenge are economic ones, I consider myself very lucky.” With just over two months to go, the Sardinian navigator feels “ready. Very ready. I’ve given my all in terms of organizing the campaign and fine-tuning the boat, so I’m leaving with a clear conscience. Of course, in the middle of the sea I already know that I will miss my family: I am a very homely solo sailor.”. This will not be an easy challenge: just think of how it went for Matteo Miceli, who capsized off the coast of Brazil as he was finishing his “echo” tour of the world also on a modified Class 40. GAETANO’S WORLD TOUR
As for the departure, Mura told us, it will take place in the window between October 8 and 10, the window with the most favorable weather: The round-the-world trip in more than 4 months will run from the Mediterranean Sea (departure in October is planned from Cagliari) across the Atlantic Ocean to the Cape of Good Hope, then clockwise around Antarctica, leaving Cape Leeuwin (Australia) and Cape Horn to the left, and then back up the Atlantic and finally return to the Mediterranean. A distance of 25,000 nautical miles (46,300 kilometers). Much of it will be developed in hostile seas, with extreme weather conditions, on the edge of Antarctic ice. To manage solo and independent sailing Gaetano will adopt the “microsleep” technique, alternating 2-hour wakes with 20-minute sleeps. The only companions on this crossing will be icebergs, whales, the all-sea dwellers, wind gusts that can exceed 100 kilometers per hour and waves of more than 10 meters. The feat will be accomplished aboard a Class 40 specially outfitted for this undertaking. HEALTH FIRST
Gaetano Mura will be under medical observation day after day; in fact, this is a unique opportunity to study the responses and adaptations of a human organism to prolonged stay in extreme environmental conditions. The challenge has been taken up by an interdisciplinary group of scholars and researchers under Professors Vincenzo Piras, Alberto Concu and Maurizio Porcu of the Cagliari University Hospital System. Alterations in blood and nervous system, muscle strength and contractile capacity of the heart, fragmentation of sleep and increased reaction time, stressed immune system-these are some of the risks an Ocean Racer is subjected to. To monitor Mura’s psychophysical state, remote monitoring of several indicators of the state of function of major organs is provided. Monitoring that will take place on a daily and regular basis through secure, non-invasive, and easy-to-implement systems based on an ICT information technology platform specially designed and developed by the research team. The main bio-medical monitoring and data acquisition systems are Remote Cardiac Output Recorder, Telemetric Brain Tracking, and Photogrammetric Motion Analysis. THE ONLY THING MISSING IN THE GALLEY IS PORCEDDU….
In Gaetano Mura’s enterprise there is an essential part: the galley. The galley will contain some excellent Sardinian agri-food products, genuinely and authentically conceived in a land rich in pristine environments and where the quality of life is high. Some of these products, such as biscuit breads, pastas, Sardinian PDO cheeses, legumes, tuna, and other traditional and certified products, such as the PDO olive oil of Sardinia, tell the story of a diet that has also made Sardinia one of the blue zones on the planet, one of the world’s longest-living areas. Longevity is, in fact, also the result of diet and a healthy and active lifestyle, rich in physical and spiritual well-being. They are all products suitable to be transported and stored for months, in the absence of a refrigerator, because they were conceived in an agropastoral society where, for example, carasau bread had to last the shepherd months, during transhumance. Gaetano Mura will thus also become an ambassador of Sardinia’s agricultural and food heritage and gastronomic culture. WHO IS GAETANO MURA
Gaetano Mura, 48, Sardinian ocean racer from Cala Gonone, married to Carla and father of Alessio and Marta. He has been sailing by any means since he was a child. Today he wants to break the record of the only sailor in the world who has sailed around the world aboard a Class40: China’s Guo Chuan, who took 137 days (21,600 nautical miles) in 2013. As a child Gaetano “stole” his father Salvatore’s small boat to explore the sea near home, embarked on fishing boats, then in command of passenger ships. Service in the Navy. At 20, he restored the Dovesesto, a dilapidated 23-meter vintage sailing ship, and organized cruises throughout Sardinia. Then competitive activity, through which he discovered a great passion for ocean racing, including the Minitransat in 2009 and the Transat Jacques Vabre, the “Coffee Route,” in 2013, which he managed to finish in 12th place despite dismasting and sustaining damage while avoiding a collision with a freighter. Telling the ocean, respect for the environment and the sea to an audience of all ages is certainly among his priorities.