Flavio Favini, a relentless sailing star (with a long career)

In 2003, Flavio Favini was the Sailor of the Year. Born in Luino (Varese, Italy) on August 10, 1965, his resume includes many years in Olympic classes, victory at the Admirals’ Cup ’95 at the helm of Capricorn, various successes with Minitonner, J22, Quarter Tonner, 6-meter SI, Mumm 30, Ims, Farr 40 and Melges 24. Won 9 world titles, 3 European titles and 20 Italian titles. He participated in America’s Cup campaigns (in 2003 and 2007) with Mascalzone Latino as tactician and helmsman and won the Melges 24 World Championship in February 2014. In the summer of that year he was the victim of a bad domestic accident, but like a true champion he recovered on the fly and went on to win the Italian title as well. Had he not been convalescent, he probably would have participated in the European Championships as well, winning it! 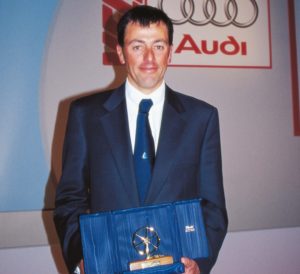 WHAT WE HAD WRITTEN ABOUT HIM
Taken from The Journal of Sailing, April 2003. As usual, Flavio Favini entered on tiptoe and exited to roaring applause from the audience. Chosen by the readers of Il Giornale della Vela (or rather, in this case it would be appropriate to say by the surfers, those of the Internet) as the sixth candidate for the 2002 Sailor of the Year through the voting that was possible on the website of our magazine, the helmsman from Luino won the Golden Helm as a “wild card.”

A fine accolade that came at the end of a peculiar season (immediately after getting the trophy he said “I have never received so many compliments for coming in last” in reference to the outcome of the America’s Cup campaign with Mascalzone Latino), but certainly in the midst of a cycle of seasons that has seen him collect important victories, including no shortage of rainbow ones. Last year it was Pasquale Landolfi (one who, thanks to the triumphs he has given Italy with his BravaQ8, can afford to say whatever he wants) who publicly “recommended” him to the Jury of Sailor of the Year. Landolfi’s “sponsorship” of Favini was ignored, however, and it was Lorenzo Bressani (deserving due to his long list of successes in IMS) who won. Thus, Favini, the Golden Helm won it this year, during an evening during which the spotlight was not only on him, but also on his opponents: champions of the caliber of Antonio Sodo Migliori and Bressani himself (Giulia Conti, Alessandra Sensini and Diego Negri were absent, however, because they were engaged in the IVF meeting in Athens).

LUINO TO AUCKLAND
Flavio Favini is delighted. He takes the stage with the Golden Helm and begins his speech thanking those who voted for him to become the 2002 Sailor of the Year by teasing: “When I came back from New Zealand to my country, I was amazed at how everyone stopped me on the street to shake my hand and congratulate me. This is the first time I have ever come last and received such a warm welcome.”But then he adds, “Actually, from the first edges on Lake Maggiore to the Hauraki Gulf, it’s quite a long jump. When I used to go out sailing in dinghies in Luino as a kid, I never thought that one day I could end up racing on the other side of the world in the America’s Cup. An incredible experience that I hope I can repeat.” Sure he will repeat it. As the newly named Sailor of the Year, Favini left immediately for Miami, Florida (a land dear to his heart, where last year he won, dominating, the Melges 24 world championship against 70 opponents) to participate in the Farr 40 races on Vincenzo Onorato’s boat.