Flash update Oct. 27, morning. The Transat Jaques Vabre (from France to Brazil) is claiming back-to-back victims…and we are only on the second day of racing. The 80-foot (25-meter) maxi trimaran Prince of Bretagne blatantly capsizes 140 miles off La Coruna (Spain) in 20/25 knots of wind. Save the crew of Lionel Lemonchois and Roland Jourdain. At almost the same time during the night the IMOCA 60 Edmond de Rotschild, Safran and the Class 40 Concise 8 withdrew due to various breakdowns.
The conditions awaiting on the third day of racing are tough. Wind 30 to 35 knots first from the south and then from the northwest making the sea cross with high waves. Very difficult condition that could lead to more surprises.

Update from Transat Jacques Vabre after yesterday’s start: calm reigned in front of Le Havre. This initially prevented the new IMOCA 60s equipped with foils from taking advantage of the new “flying” configuration. Let’s take a look at the provisional rankings after the first day of racing.

CLASS 40 – Leading the way is (at a speed of 12 knots, in with island of Ouessant) Nicolas Troussel and Corentin Horeau’s Bretagne Crédit Mutuel Elite, tailed by the new V&B of Sam Manuard and Maxime Sorel. In third place was Le Conservateur by Yannick Bestaven and Pierre Brasseur.

IMOCA 60 – In the lead, as the wind picked up, Hugo Boss, the new IMOCA of Alex Thomson and Guillermo Altadill, took the lead: the two launched into the open ocean, and are on the ideal traverse of Ile de Sein. They are followed, 17 miles away, by MACSF by Bertrand de Broc and Marc Guillemot and Bastide-Oio by Kito de Pavant and Yann Régniau.

LATEST – Currently there is Sodebo by Thomas Coville and Jean-Luc Nélias in the lead, followed by the big favorite Macif by Francois Gabart and Pascal Bidegorry and Prince de Bretagne by Lionel Lemonchois and Roland Jourdain.

MULTI 50 – After an excellent start, FenêtréA-Prysmian of Erwan Le Roux and our own Giancarlo Pedote slipped to fourth and last position. In the lead is Ciela Village by Thierry Bouchard and Oliver Krauss, followed by La French Tech Rennes Saint Malò by Gilles Lamire and Yvan Bourgnon and Arkema by Lalou Roucayrol and César Dohy. But they are all very close, and the hopes of Pedote and Le Roux, favorites, remain high. By the way, here is what Giancarlo told us in an interview we published in the September issue of the Journal of Sailing. 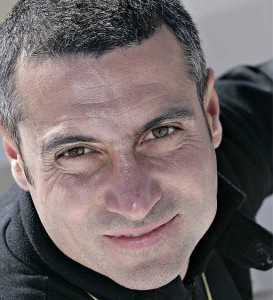 OUR INTERVIEW WITH GIANCARLO PEDOTE
“I want to fly. On my own,” says Giancarlo Pedote as he helms the trimaran “Multi 50” FenêtréA-Prysmian with which, paired with Erwan Le Roux, he will set off for the Transat Jacques Vabre at the end of October at 15 knots, with only 7 knots of real wind. The most successful Italian solitaire in history. The only one since the cyclist Bartali, as Paolo Conte wrote in the famous song of the same name, who pissed off the French. For the past six years Giancarlo Pedote has moved to the den of the great French loners, in Lorient, Brittany with his wife and children born there. The French chauvinists had to bow to this 40-year-old Florentine who was a windsurfing instructor and only by chance became first a sailor and then a soloist. French who elected him Champion de France Promotion Course au Large en Solitaire for two consecutive years. That is, the best solo navigator in the world.

Yet you can’t get the 2013 Mini Transat failure to win the Mini Transat out of your mind.
Yes, I still dream about that “jinx.” Without the forced stop on the first leg and the bowsprit break with a few miles to go on the second leg I would have won big.

You are considered a rational “cold” yet you were telling me that your sports idols are Ayrton Senna and Diego Maradona, two sportsmen famous for their flair and imagination.
True, my approach to sports is logical, but I love the stroke of genius. I have a degree in philosophy, and my method is to always start with an expanded vision that embraces every possibility and then tighten by simplifying as much as possible, toward a goal.

And what is your goal today?
I want to learn to fly a sailboat. I am certain that the future within the next two years for professional sailing will be this. And I want to be ready to know how to lead boats with foils, multi or monohull. I put my mini Prysmian ITA 747 up for sale (at 110,000 euros, ed.) and with the proceeds I’ll buy a Class A with foils or something like that and train all winter.

In the meantime, do you train with the Multi 50?
By sailing this boat I learn to speed up thinking. With an object steadily going at 25 knots, decision times must be very fast. One little mistake and you’re screwed. For example, look (he’s at the helm and purposely errs in steering) if I’m not careful the boat implodes and from 15 knots it practically stops (and in fact the boat sailing on one hull dives with all three hulls and practically immobilizes).

Do you plan to make the big leap from the mini to the Imoca 60 to take part in the most grueling and prestigious regatta for a soloist, the upcoming Vendée Globe?
Yes, necessarily. A solitaire’s goal is the Vendée Globe (The nonstop solo round-the-world race, ed.). And in the edition that starts in November 2016, I would like to be there too. Maybe with an Imoca 60 flying, with foils.

It will be all about budget and sponsors.
Yes, but it is also all about perseverance and also luck. I’ll tell you how the sponsorship of Prysmian (a world leader in electric cables, power cables and systems, and telecommunications, ed.) came about by chance. I was a sailing instructor, and I understand that my life is that of a sailor and solo sailor. I realize that there is no proper sailing manual. Said and done: I write it and publish it. I introduce myself to one of my students, and at the bar I give him the first copy. The student was the CEO of Prysmian, to which I had made part of my dreams. So I became a professional ocean sailor and Prysmian became my sponsor.

The place where you love to sail the most?
The Bay of Gascony, that part of the Atlantic Ocean that bathes western France and northern Spain. A real training ground for sailing. Currents, tides, wind gusts ranging from 10 to 30 knots.

And on vacation, if you go there?
Tuscan Archipelago, where I learned to sail, when windsurfing instructor one day I had to replace the sailing instructor, without ever having gone sailing, in a lesson on a Flying Junior. I’m having the time of my life, and the students are, too. And I thought drifts were the tub of failed surfers!

Why do you like to sail alone?
Surfing alone pleases me; it allows me to experience a dimension that suits my personality. The spirit of the wild surfer has given way to a meditative and introspective spirit. Slowly the two aspects merged together into a new form. So I’m fine.