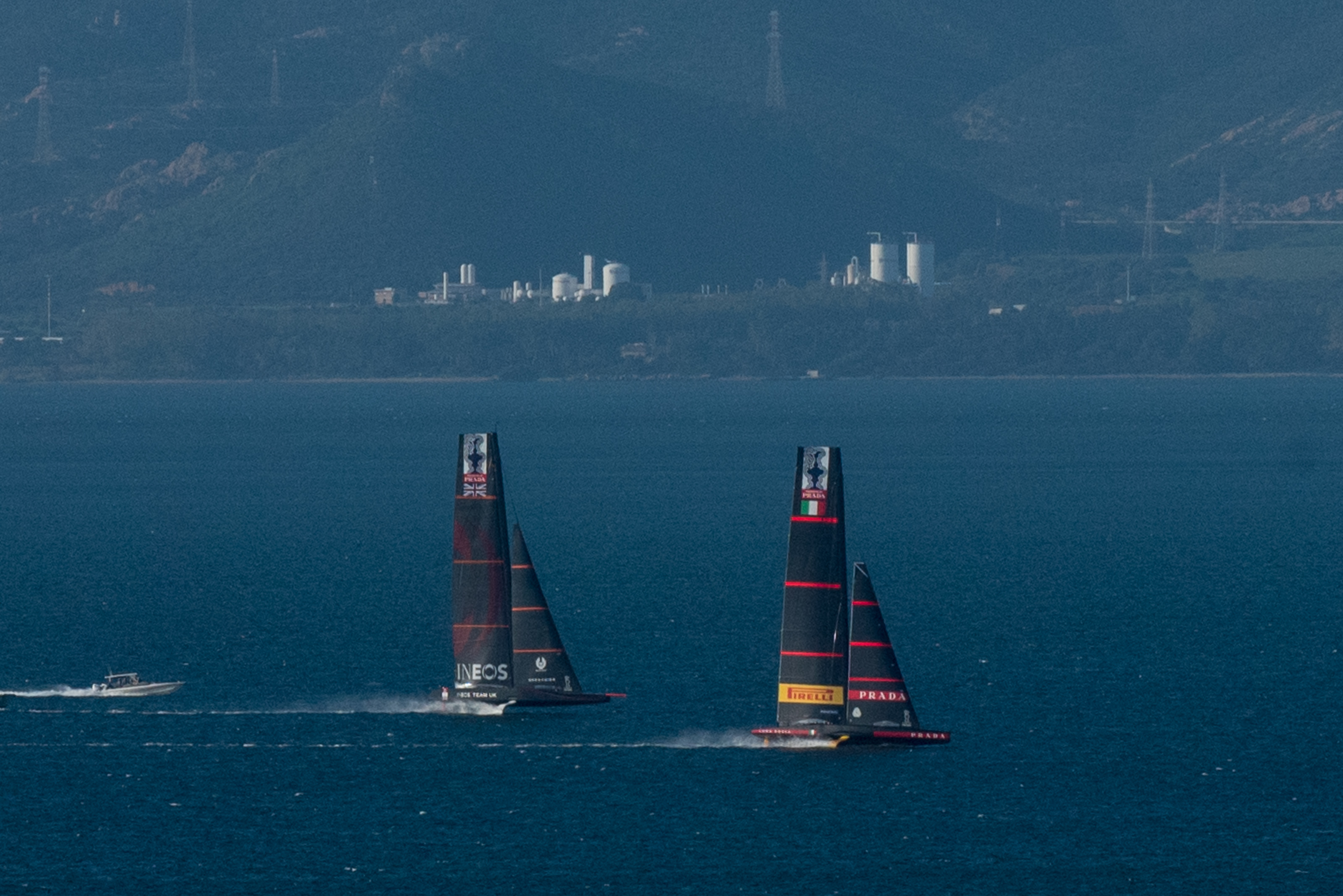 For months now, ever since the first AC 75 touched the water (read HERE) there has been “chatter” about the next America’s Cup boats. How fast are they? Who is the fastest? What are they trying? Why are they so different from each other?

A “mystery” fueled by the teams’ need for confidentiality, jealous of their in-water training for obvious espionage reasons or inclined to show only what they deem uncompromising. Short video clips (Team New Zealand’s less short) or artfully cropped photos to show nothing sensitive. And especially never any image of two AC 75s in close contact.

Well, the wait is over. The Sailing Newspaper has come into possession of the first photos ever taken of two AC 75s in training. Luna Rossa and Ineos Team UK were immortalized in Francesco Nonnoi’s images for the Giornale della Vela as they performed what looks like a speed test in the waters off Cagliari.

Images taken a few days before Luna Rossa’s dismasting. And what we see, in addition to being an important document for this nascent America’s Cup, less than two months before the Cagliari races (April 23-26 ed.), also offers no small technical insights.

AS RED MOON “ASPHALTS” THE BRITS OF INEOS AND BEN AINSLIE

The two AC 75s are sailing upwind on a mistral day around 15 knots. The sequence suffers a bit from perspective distortion, but you can see that the boats in the first photo are paired with some lateral distance. Gradually there is a distinct feeling that Luna Rossa closes the distance, thus hemming more, and even overtakes from downwind, and quite sharply the British. To paraphrase an expression of tennis friends: game, set, match, and all go home.

No small snub, although of course we don’t know what settings the two boats were sailing with and whether both were at their full potential or not.

The overtaking figure is not the only interesting one, but other things stand out. Luna is armed with a square-headed jib with a minor luff. And then there is the flight: skimming and appurtenant that of Team Prada, decidedly high that of the British (much to the chagrin of commentators who claimed that appurtenant flight was a trim problem).

If that were not enough, looking at the tilt of the shafts, one could even argue, and we do, that Luna flies slightly upwind, as if it were a 75-foot Moth. Moon above water, like a shark, Ineos with that somewhat “awkward” shape looks instead like overweight prey. While Sardinian murmurs tell of a top speed of Team Prada in excess of 46 knots and possibly more.

If what we have shown you corresponds to reality, which is that Luna Rossa right now possesses significantly better performance than the British, it would mean that Team Prada’s months of silence and mystery have paid off.

Of the obviously partial fruits, since we are talking about boats that we will probably not see in the Cup proper where the number 2 hulls yet to be launched will almost certainly race. But it would still be an important psychological, as well as material, advantage that perhaps not even the disalberation of the past few days can undo.

And some people swear they heard Ben Ainslie come ashore after training with Luna Rossa and exclaim between his teeth, “Oh shit, f..k your majesty.”