Even the best get it wrong: 5 glaring mistakes in sailing history

The mistake made by Phaedo3 at the Rolex Middle Sea Race is truly sensational and is causing the web to discuss: how is it possible, with all the technology aboard a very fast MOD70, led by the best sailors on the market, to confuse the island of Lampedusa from the island of Linosa? In any case, this is not the first glaring mistake, nor will it be the last: to us, at first glance, five precedents in “mistakes” come to mind, which we recount below. Do you remember any others? 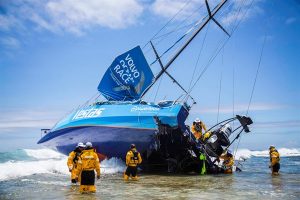 1. VESTAS TEAM BURIED IN CORALS (AND RIDICULE)
On November 30, 2014, during the second leg of the Volvo Ocean Race, Team Vestas, captained by the great Chris Nicholson, incredibly beached itself on the reef in Cargados Carajos Shoals, about 200 miles north-northeast of Mauritius (with the crew forced to abandon the boat): an affair that had almost the tragicomic (costing 4.5 million) ended with the mea culpa of navigator Wouter Verbraak, who was literally fired “on the spot.”

2. MONSIEUR BOURGNON’S CRASH.
And what about the very great Yvan Bourgnon (brother of the late Laurent), who inexplicably ended up against the reefs of Sri Lanka while completing his round-the-world voyage on a 6.20 m uninhabitable catamaran in August 2014. He had recounted, “By the time I was about to reach the coast,” Yvan recounted, “the wind had died down and I thought I would put on autopilot to rest for a while, pointing the bow offshore. I woke up when I was literally ripped off the ship by the waves and found myself in the water, in a place full of outcropping rocks. I am alive by a miracle.” 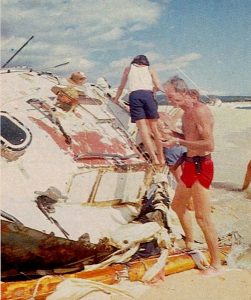 3. MOITESSIER’S “ONE-TWO PUNCH”
Bernard Moitessier, the late legendary navigator and perhaps the greatest “literary man of the sea,” got up to some big ones: aboard the Marie Therèse II (with which the great navigator had sailed from Mauritius to Cape Town and then on to the Antilles), Went smashed on the reef of Diego Garcia Atoll. as he was trying to reach the Trinidad due, it is said, to a stroke of sleep. Shortly before, the Marie Therèse I had run him aground, through a charting error, in Mauritius, just as happened to Team Vestas. 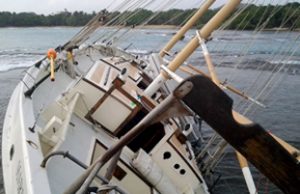 4. MALINGRI BEACHINGS.
Let’s repeat it: it happens even to the best of us, and it can happen more than once. Let’s take Vittorio Malingri: the Time of Wonder, the schooner-boat (a 1975 Pinky Schooner 45, but whose design is a century old) with which Vittorio was sailing in Central America, washed up on the reef at Turtle Cay, Panama, last summer. Vittorio recounted that his engine died as he was leaving a harbor and the current tossed him onto the reef, too close to the time of the inboard failure to have time to hoist the sails or drop anchor. Also in ’88 he was beached in Tarifa with Huck Finn and twice with his great friend Giovanni Soldini’s trimaran. 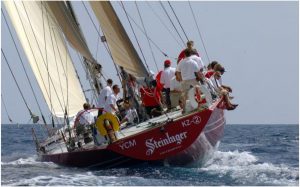 5. THAT TIME FALCK ENTERED PORTOFINO WITH STEINLAGER.
This one was told to us by sailor-cartoonist Davide Besana, and it relates to the “foolishness” that was remedied by none other than Giorgio Falck with his Steinlager II: “Steinlager II, thirty-five tons of carbon and technology, a container of sails, and a couple of astonished New Zealanders trying to keep that masterpiece in order with Anglo-Saxon methodology while the Italians smoked below deck and Falck suddenly tacked without the entire crew being informed. I was on board the day of Portofino. There was a strange wind for the Tigullio, a northerly in the mid-twenties knots that went over the mountain and fell in patches making the grinders work hard, and Giorgio’s villa was full of important guests who came out into the garden seeing the red ketch deemed at the time to be the best carbon artifact in human history since the Space Shuttle cargo hatch approaching.

Don Wright asked Giorgio : “Is this Portofaino?” Giorgio responded with a question, “Haven’t you ever been to Portofino? I want to show you Portofino.” And pointed to the mouthpiece. The crew prepared for a turn that was not there; they simply pulled straight. The harbor was perfectly ridged and our speed dropped just as we became dumb and everyone on the dock stopped talking, and even the children whom the fathers lifted up to witness one of the last appearances of the Flying Dutchman stopped whimpering, at least until, faced with half a dozen bowsprits waiting for us like the spears in Paolo Uccello’s Battle of San Romano he decided it was time to tack, closed his eyes, and tacked.

With his stern he did, I had nothing to do with it, quite a bit of damage to a Riva moored in front of the Gritta, with his bow he entered instead a motorboat of about twenty meters, it was immediately seen that it was made of marine plywood, tore a few meters of electrical cables from it, emptied the refrigerator, turned on the lights of a cabin and threw some fenders overboard. Those who have been fortunate enough to visit Portofino will understand what a giant screw-up we made on that autumn day, under the puzzled gaze of the important guests whom Rosanna Schiaffino Falck had displaced into the villa’s garden so that they could witness the conquest of the village by the master of the Ferriere“.

PrevPreviousBut what iPhone 7, take a boating vacation. It costs less now
NextBarcastop-mania, everything you need to know to board for freeNext
In evidenza