Duvetica case: a series of unfortunate events (that will never be repeated) 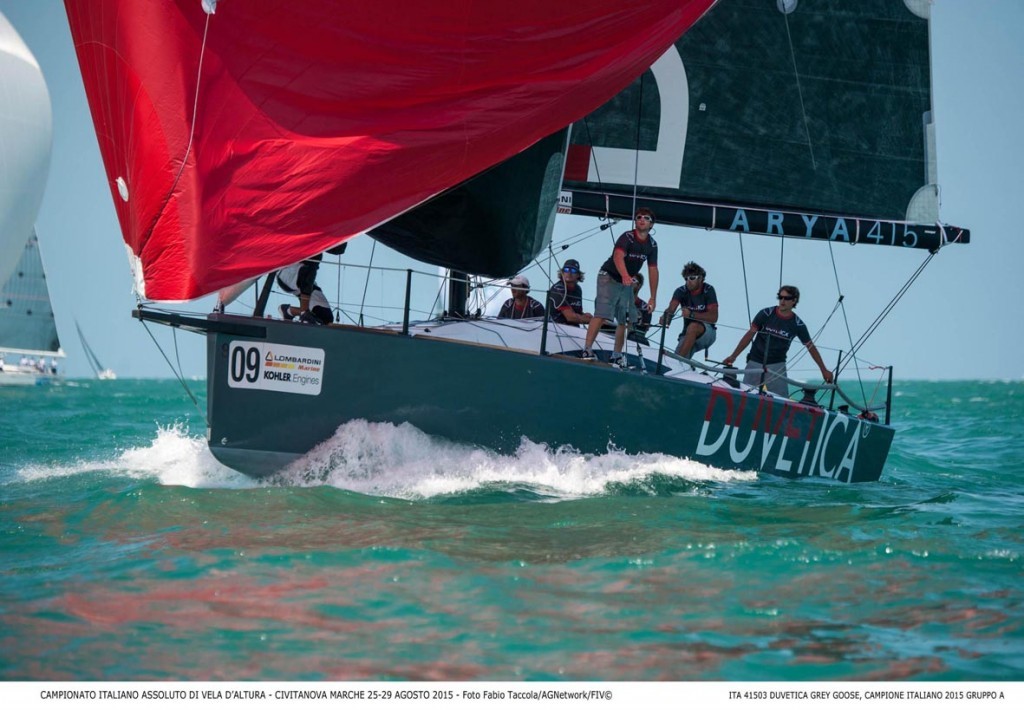 “Can, the flap of a butterfly’s wings in Brazil, cause a tornado in Texas?” wondered mathematician and meteorologist Edward Lorenz. Judging by the blizzard that arose around the case of the “wrong” tonnage certificate of the Arya 415 Duvetica Grey Goose at the 2015 Italian Offshore Championships, yes(HERE’S THE STORY OF THE VICTIM). A small human error in transcribing data started a series of unfortunate events that resulted in a more-than-advantageous rating for the boat, effectively distorting the Championship and unleashing a wave of dockside controversy, letters of protest and the resignation of Grey Goose’s owner, Sergio Quirino Valente, from the ranks of the UVAI (Unione Vela Altura Italiana). For the sake of clarity, we have tried to reconstruct the story in detail, and with the help of UVAI Technical Reporter Riccardo Provini, we will explain why this episode will not happen again.

DOCKSIDE SUSPECTS
Those who were there, at the Italian Championships in Civitanova, can only confirm this: the performance of Duvetica Grey Goose in compensated was too, too superior to the rest of the fleet. Six wins out of seven trials with oceanic gaps can mean only two things: either that aboard the winning boat is Team New Zealand in disguise and the other crews are made up of amateurs (and that was not the case: very strong Valente and co. but the others were certainly not watching), or that there is something wrong with the rating. Everyone talking, suspecting, but no one taking responsibility for a protest of tonnage: it is a wholly Italian phenomenon whereby those who advance protests of tonnage pass as “assholes.” “After the Championship, Nicola Sironi, Chief Measurer of the ORC, sniffed out dockside suspicions, and received a call for an explanation of the value of the dive, verified Duvetica’s certificate in person and sent us a report,” explains Riccardo Provini. From there the “investigation” began and resulted in the withdrawal of the boat’s tonnage certificate.

A SERIES OF UNFORTUNATE EVENTS
What happened, specifically? “Someone within the Federal ORC National Computing Center made a transcription error,“ Provini continued. “Specifically, the measurement of the boat is done using an offset file (which processes lines, i.e., establishes hull profiles from numbers), which needs reference points outside the hull (fore and aft) that are used to interpolate the left and right sides of the boat to then determine its shape. Points that are deleted once the joining of the two parts is performed. In this case, you missed a spot, across the bow of the boat, right next to the bezels of the PC screen. An unjustifiable mistake, but one that can happen. Very, very rarely, since the Computing Center has been issuing certificates since 1990 and nothing like this has ever happened. Such an error, if the old calculation programs had been in use, would have popped up, because the system would have crashed. Instead, the new software, which is faster and performs better, ended up “digesting” the error“. To make a long story short, however, a greater draft was indicated on the certificate than the boat actually fished. “There was no way to verify before the regatta the goodness of Duvetica’s certificate, because it was issued in mid-August, just before the Italian, and therefore could not participate in other pre-championship events. Also, the Arya 415 is an almost one-off boat, difficult to compare the tonnage certificate with other twins, it would have been much easier to notice the error if it was a large series boat“.

IT WILL NEVER HAPPEN AGAIN
Could such a situation happen again, shipowners wonder? ORC is a system that is not perfect but “perfectible.” But according to Provini “this error is virtually impossible to repeat. Surely in the new calculation programs will be prepared a warning system related to the outer points of the boat that may remain after the offset files are loaded. And certainly at the Computing Center they will be very careful“. So, shipowners, rest assured that no such irregularities will occur in 2016….

DUVETICA, THE SAD CHAMPION
“Too bad,” concludes the UVAI Technical Manager,“because Duvetica relies on a very strong crew that with the correct certificate could have played for victory anyway.” Instead, owner and boat found themselves embroiled despite themselves in a real storm (They should have noticed, too, that there was something wrong with the certificate, someone said on the dock), Despite the fact that the title remained in their hands: also because, once the event is over, the Jury disbanded. After that there are still 15 days to file a protest. After the time expires, any undisputed irregularities “fall under the statute of limitations” (except, for the record, for international doping cases).

VICE-CHAMPION HANDS BACK THE VICE-TITLE
The latest development in the affair saw the Italian vice-champion in the Cruising category, Claudio Terrieri of Grand Soleil 43 Blue-Sky, hand back the trophy. Terrieri writes in a letter: “Considering absurd the climate of uncertainty generated and not knowing officially what is the real position in the ranking of the Blue Sky I officially place in your hands the title of Italian Vice Champion Class 1 Cruising,it will be my care to deliver the trophy unduly received at the Secretariat of the Sailing Club of Civitanova“.