Today we bring you two previews that left a strong self-image in our eyes because of their ability to offer the public visiting the Dusseldorf show something truly different: the Dragonfly 28 Performance trimaran and the Premier 45, son of one of the world’s most technologically advanced shipyards in the composites universe.

DRAGONFLY 28 PERFORMANCE: THE TRIMARAN THAT “SHUTS DOWN” 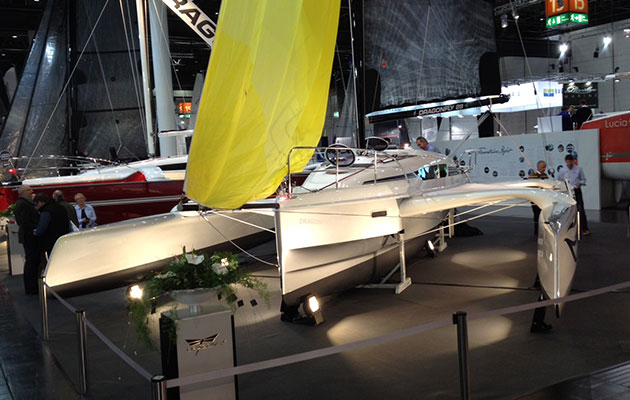 It has been 50 years since the Danish shipyard Jens Quorning produces trimarans, which have become world famous for their system Swingwing which makes it possible to decrease the width of the boat by bringing the side hulls closer to the center hull thanks to the rotation of the bars that connect them, thus allowing owners to cart the boat (in the case of this 28-footer, the width is increased from 6.5 meters to 2.53). The Dragonfly 28 Performance is an evolution of the Dragonfly 28 available in Touring and Sporty versions, the latter rigged with an oversized mast that remains so even in the Performance version, where the novelty lies instead in the hull lines that allow for better wave cutting and buoyancy while promising a 10 percent increase in sailing speed. It is certainly a very wet boat, but for its part it reaches twenty knots of speed with ease, ensuring great fun and ease of maneuvering. Another interesting feature is that its draft can go from 1.70 m to as little as 40 centimeters, allowing it to go all the way to the beach to drop anchor. 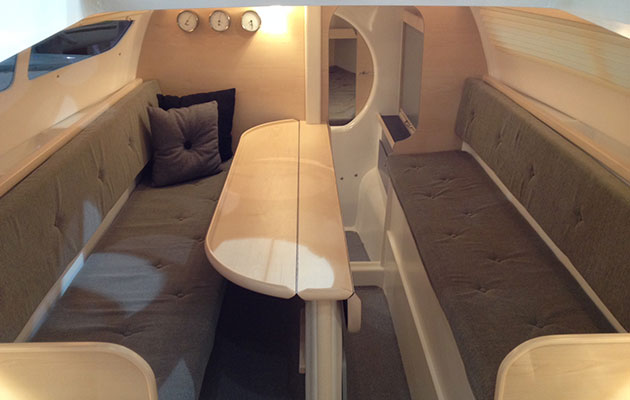 PREMIER 45. THE ULTIMATE IN TECHNOLOGY COMES FROM DUBAI

The design team Botin&Carkeek (best known for designing TP52s) has designed a “racing beast,” a powerful, extremely fast, and very light boat (only 8,000 kg for a nearly 14-meter boat) built by the shipyard Premier Composite Technologies of Dubai, which, among its latest projects, includes the Farr 400 One Design and is certainly among the leading composite shipyards. A high-performance hull that also winks at cruising, however. Those at the helm of this bolide have “full powers”-they have all the maneuvers at their fingertips to easily steer the two-person boat, as well as on their own. The sail area (122 square meters upwind and 260 at headlands) is plentiful and should not cause a lack of power, especially in headwinds.
The Premier 45 ‘s hull and deck, processed using the vacuum infusion technique, are made of fiberglass sandwich with a foam core and carbon reinforcements to ensure lightness and rigidity of the hull. The boat is also equipped with lifting keel whose depth varies from 1.75 m to 2.75 m. The double wheelhouse is highly advanced to keep weights away from the extremity and increase the visibility of the helmsman. In front of the rudder wheels is the staysail with the mainsheet deferred to the German. The mast and boom are carbon, a retractable bowsprit for the gennaker is armed in the bow, and all deck equipment is Harken. A long, continuous, V-shaped fenestration is drawn on the minimal, tapered deckhouse: particular is the choice of windows that are not at the sides but run along the entire roof of the deckhouse. There is certainly no shortage of light below deck. The large, open cockpit aft houses a center table; there is perhaps some lack of storage space if you decide to use the boat for cruising as well, and we are left with the question after our visit of how to fit a bimini or spryhood on board. 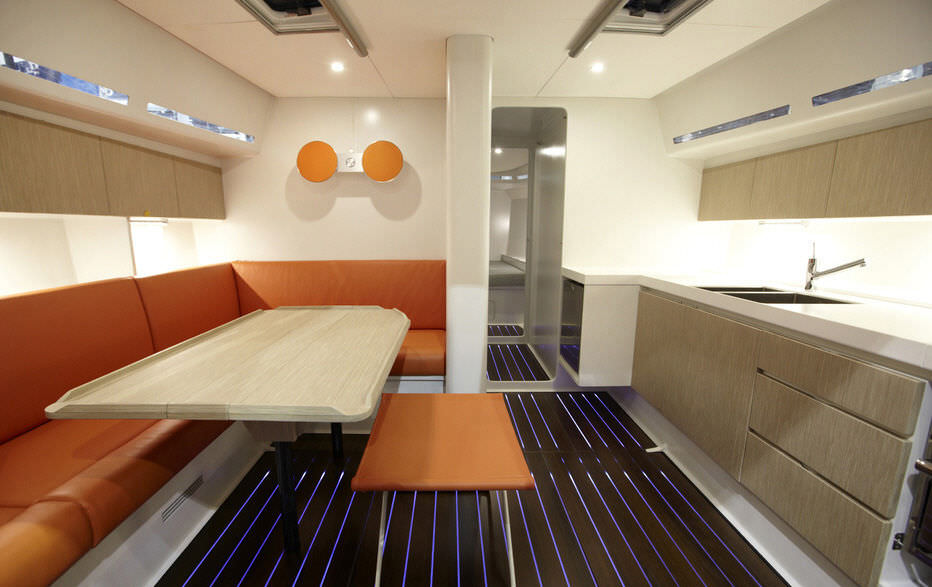 The absolutely minimalist, clean and practical interior layout includes three cabins, with master stateroom in the bow, and two bathrooms and was designed by renowned Norwegian architect Snøhetta. In the saloon, the Corian kitchen countertop with stove is leaning against the starboard broadside while opposite is the L-shaped dinette. The floor plan is oak with programmable LED floor lighting. Unlike the deck, there is no shortage of storage space underneath. The price is around 630,000 excluding VAT. www.pct.ae
Length.13.72 m; width. 4.15 m; displacement. 8,000 kg; fish. 1.75 – 2.75 m; sail sup. 122.10 sq. m; berths: 7.