Day two of the trip to the Dusseldorf boat show. Day of great presentations such as that of the new Bavaria C57 signed Maurizio Cossuti and the new Swan 65 signed German Frers. Afternoon discovering new features such as the Nuva MS6 motorsailer, the Hanse 315’s new Torqueedo electric motor, and finally discovering the Dufour shipyard’s new flagship: the 63 Exclusive.

NUVA MS6: A 6-METER MOTORSAILER
Today we set off in one of the wackiest boats we have encountered on our tours. It is a 6-meter motorsailer: Nuva MS6.

A vessel that aims to combine together the calmness of sailing and the power of motor sailing. When we say the word “motorsailer,” we are automatically led to think of a large, slow boat. And instead the NUVA MS6, definitely clashes with the collective imagination (remember, on a larger scale, the BD56, a product of the same designers?). 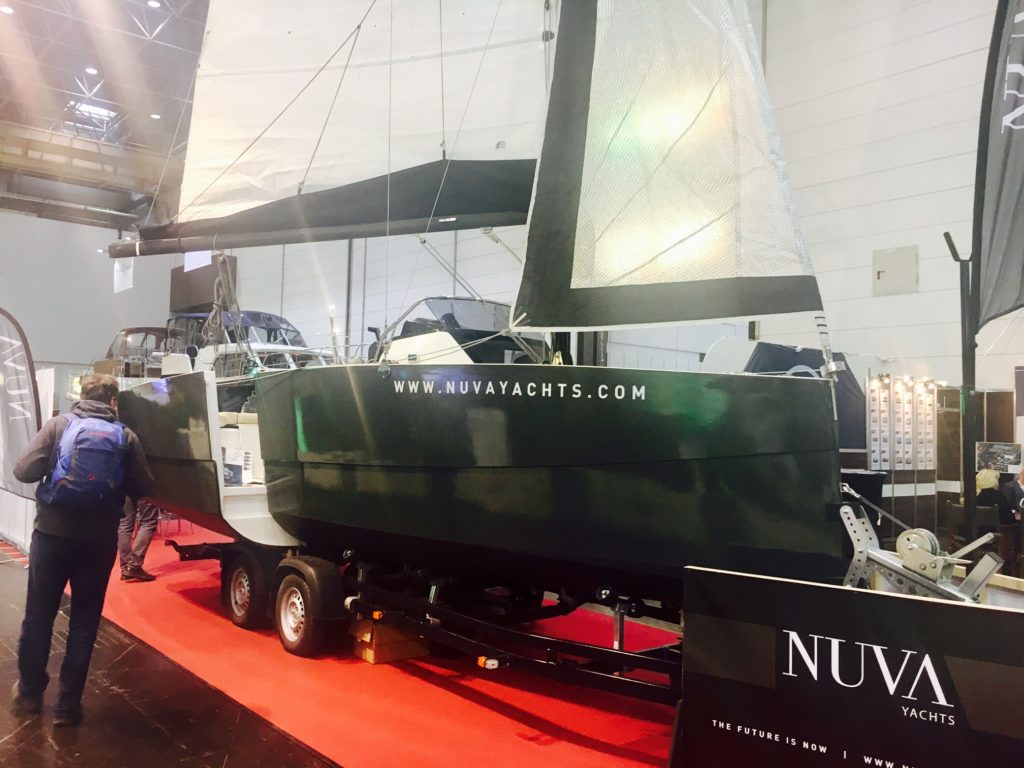 It is in fact a small boat (5.99 meters hull length) that is a true motorsailer. But there’s more: in the optional MS6 Plus version, the cockpit is extended, the beam is increased from 2.45 to 3.45 meters by widening the bulwarks! When extended, it transforms into a large sunbathing or dining area in total comfort. Housed in the stern is the high-powered outboard (70-horsepower Yamaha), which allows the boat to plane (cruising speed is estimated to be around 14 knots, maximum 20 knots). 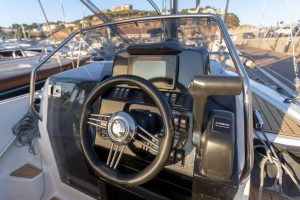 Moving towards the bow, the “imported” wheelhouse from the motor world with a sporty look stands out (and here sailing purists will turn up their noses), while the cabin below deck, accessed from the entrance to the left of the center wheelhouse, provides comfortable accommodation for two people (there is also a chemical toilet). 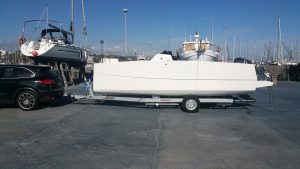 The bulbous keel that retracts into the hull is fully retractable, which makes it possible to navigate even in shallower waters and makes it easier to trailer the boat: forget the expense of a berth, you can haul it dry whenever you want.

THE EMOTION RUDDER DRIVE ABOARD THE HANSE 315 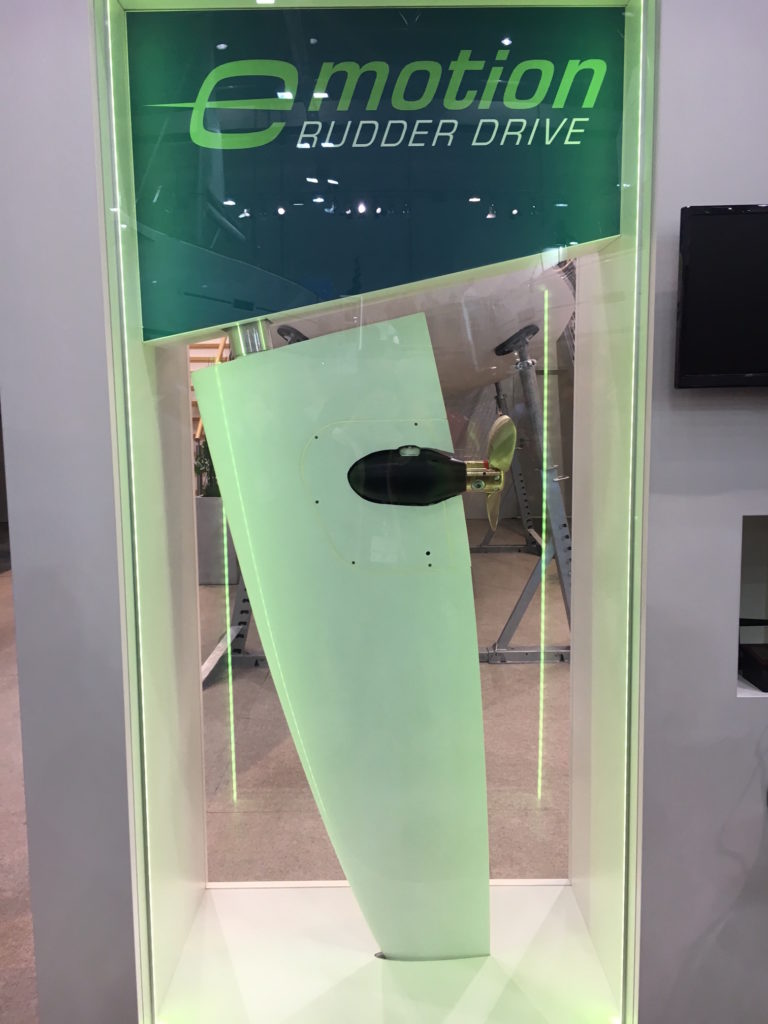 Moving on to the Hanse booth instead, we got a close look at the Emotion Rudder Drive, the Torqueedo electric motor installed aboard the Hanse 315. An interesting electric propulsion system integrated into the rudder that effectively eliminates the saildrive and replaces the diesel engine and its components. 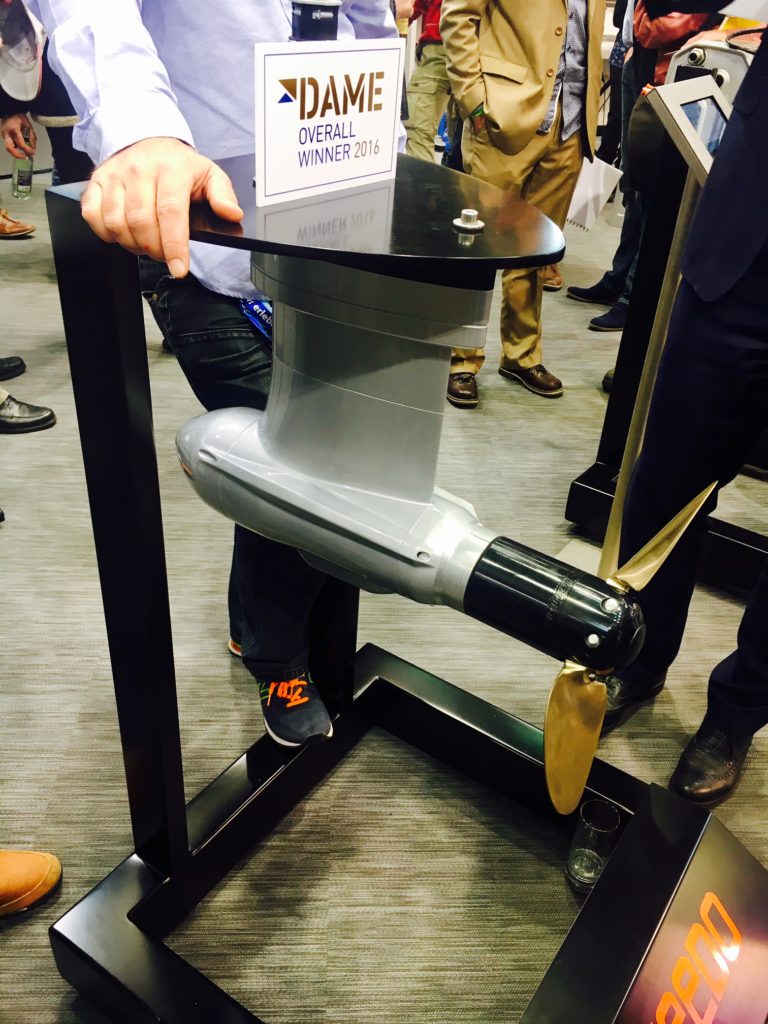 This included a 4 kW electric motor with a folding propeller, firmly integrated with the rudder blade. The advantage of this system is greatly improved maneuverability and, of course, a quiet, emission-free ride (which will allow you access to, among other things, Marine Protected Areas). 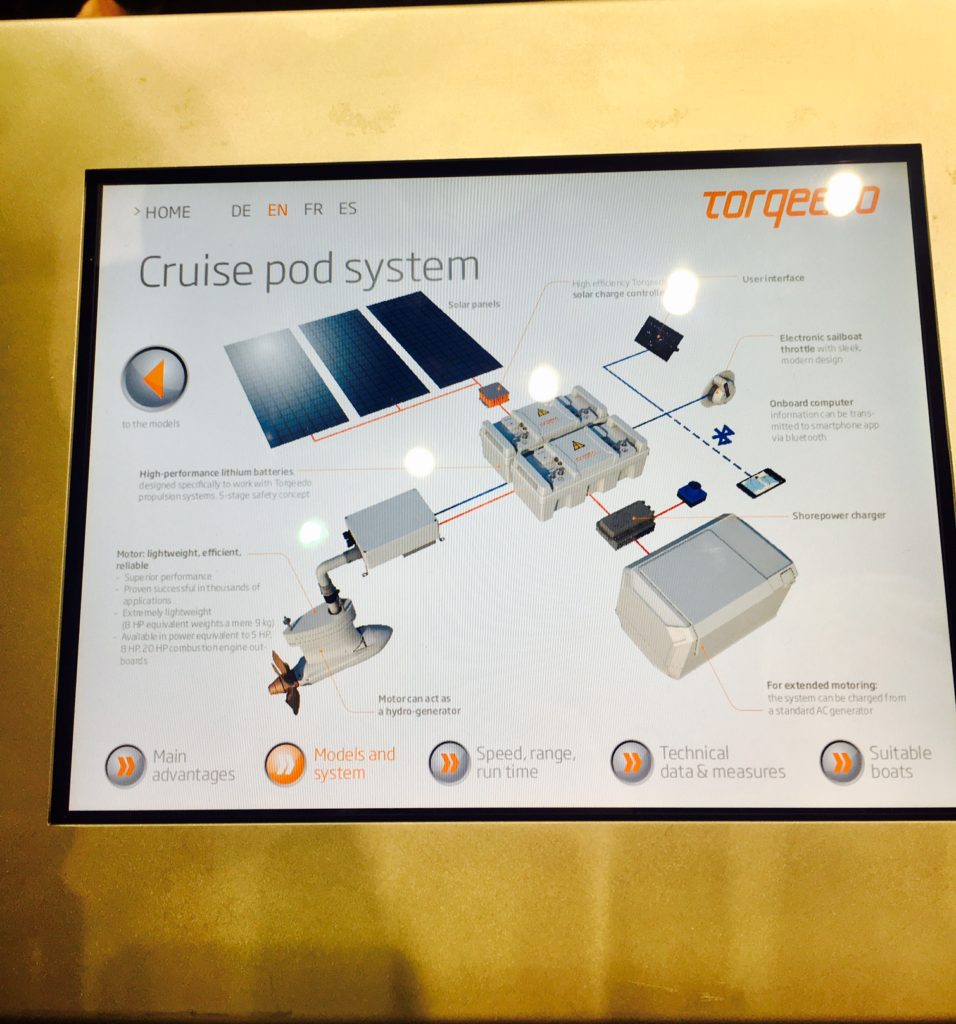 Thanks to the motor built into the rudder, thrust is directed in the respective direction of the rudder position. The expanded rudder angle (a total of 100 degrees), allows the new Hanse 315 e-motion rudder drive to rotate on the moment on its own axis, forward and backward. For side mooring maneuvers, the stern of the yacht with the engine can be approached to the dock with millimeter precision, which is particularly advantageous in windy conditions and tight harbors.

MOST ANTICIPATED WORLD PREMIERE: HERE IS THE NEW DUFOUR 63 EXCLUSIVE 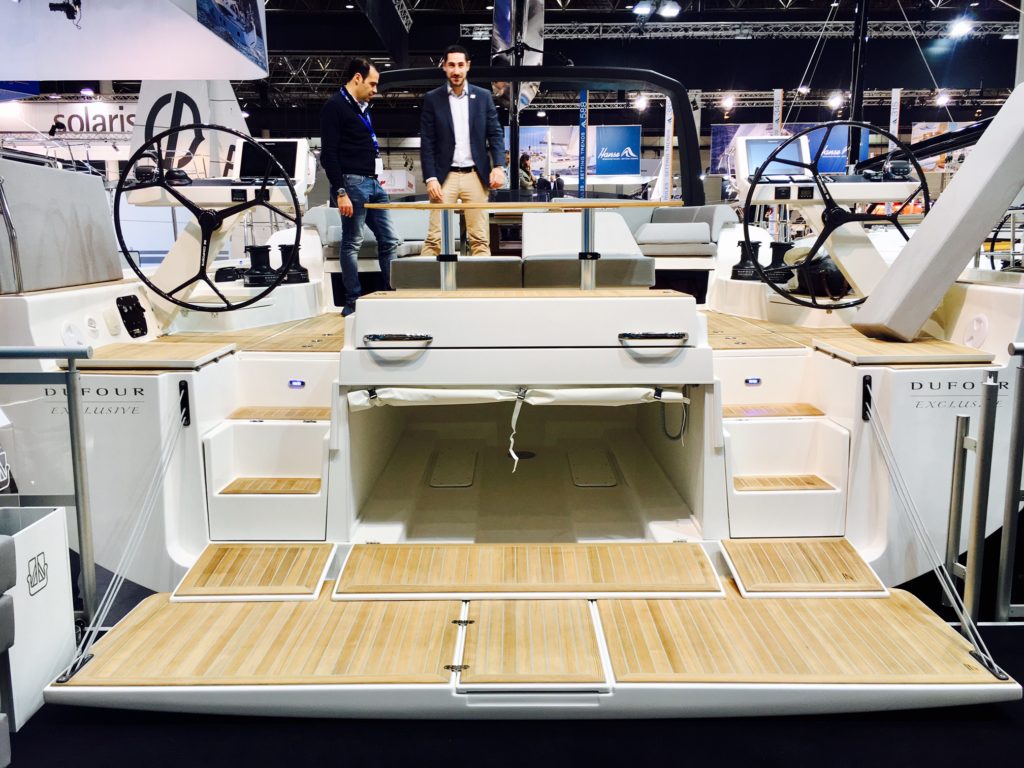 But the time has also come to talk about the big news: the French shipyard Dufour has in fact chosen the Dussledoorf Boat Show to present the first 63 Exclusive. Which we want you to taste told directly by Paolo Serio, marketing director of the shipyard.


THE SECOND WORLD PREMIERE IS THE BAVARIA C57 SIGNED BY COSSUTI 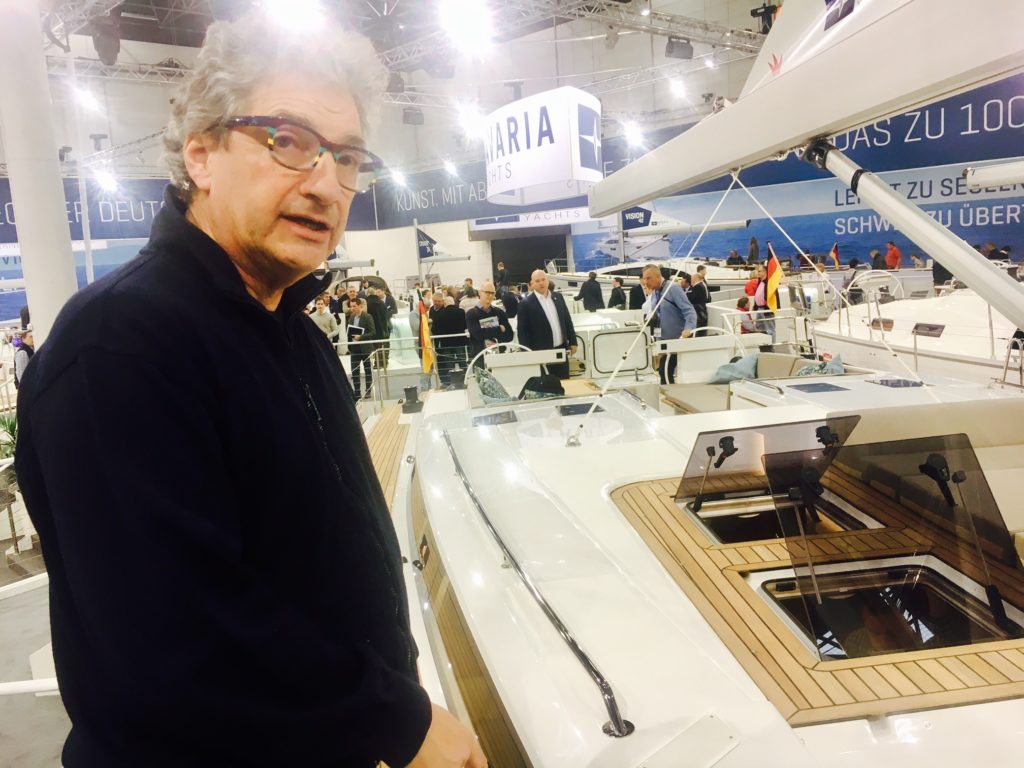 Maurizio Cossuti is undoubtedly the Italian king of this German boat show. The Bavaria shipyard called on him to sign its flagship, the Bavaria C57, which really proves to be different from previous models. We liked the deckhouse made on two levels and the great novelty (finally!) of being able to have a higher performance boat with a carbon mast and three-meter long keel. A possibility never before seen aboard a boat from the German shipyard Bavaria. Maruzio Cossutti graciously took us on a tour of his new “baby” that really impressed me with the stern volumes (the maximum beam is 5.28 meters) and the installation of the i-boat system that allows you to control from your cell phone or tablet all the boat’s instrumentation. The boat is available in the Owner Style version at 446,131 euros and in the Holiday version (for charters) at 416,381 euros. 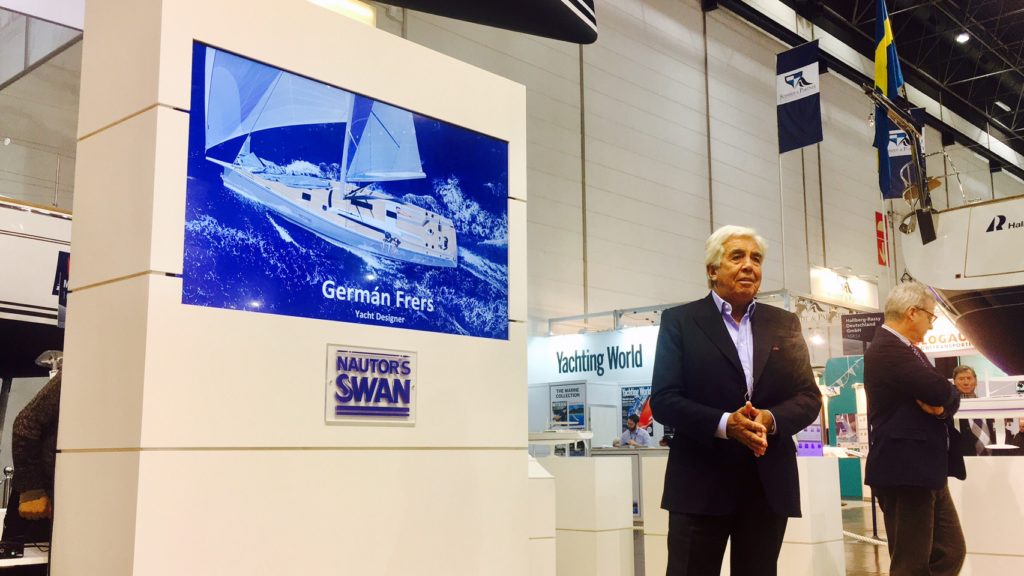 Leonardo Ferragamo chooses Dusseldorf to present the latest additions to its shipyard, including the Swan 65 designed by German Frers. 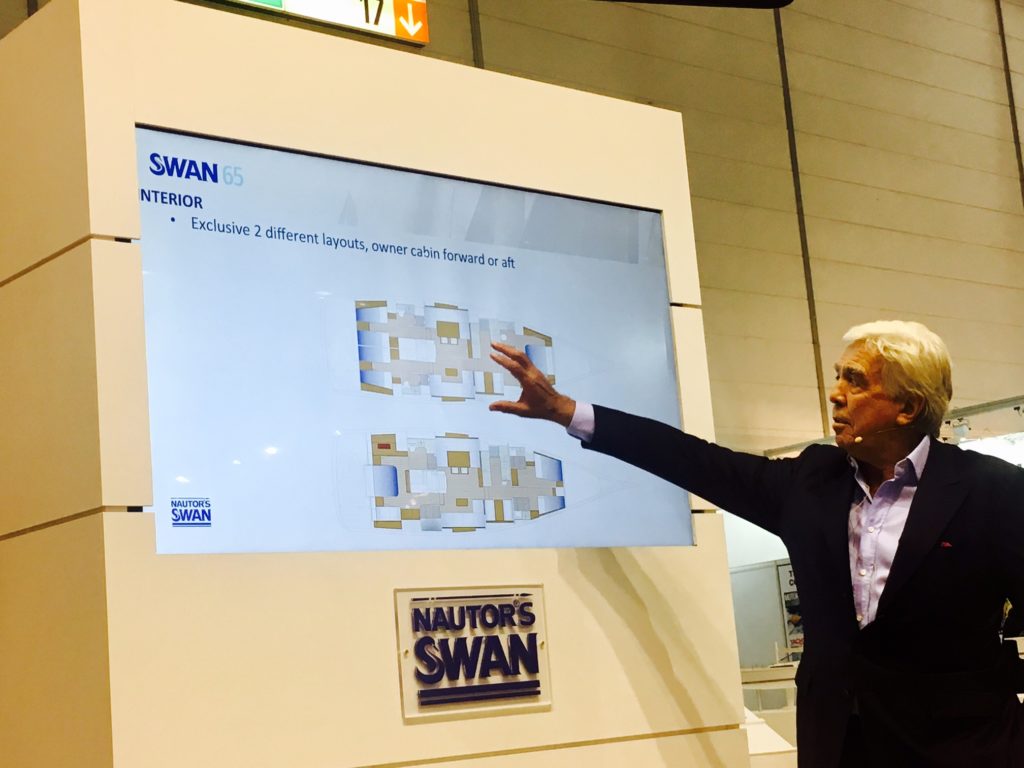 The first boat is expected to hit the water in 2018 and features a state-of-the-art sail plan, a structural bowsprit for asymmetric, standard park avenue boom carbon mast. The deck is extremely clean and optimized for sailing even with a small crew. Internally, there is a choice of having the master cabin aft or forward.