Colin Firth is Donald Crowhurst in a film coming out in October! Do you know his bitter story?

Colin Firth, on the big screen, will be Donald Crowhurst: in James Marsh’s “The Mystery of Donald C.,” to be released in theaters in October (English title: “The Mercy”), the British actor will play the amateur sailor who had decided to participate in the 1968 Golden Globe Race, the crazy solo round-the-world challenge, on the trimaran Teignmouth Electron: Crowhurst was lured by the amount of money up for grabs for the winner, an amount of money that would save his business on the brink of bankruptcy and provide support for his family. He will pay with his life after literally going insane on board. Alongside Firth, an all-star cast with Rachel Weisz (playing Crowhurst’s wife), Jonathan Bailey, David Thewlis, Ken Stott.

Do you want to arrive informed in the hall? Crowhurst’s story is worth telling. Sit comfortably and enjoy your reading.

THE INCREDIBLE AND BITTER STORY OF DONALD CROWHURST

Year 1968, British newspaper Sunday Times launches the first non-stop solo round-the-world race. At the start an unknown Englishman shows up in a tie. is unprepared, but ready for anything to satisfy his spirit of adventure and save his family from bankruptcy. We retrace the dramatic life of a man who gave everything to the sea 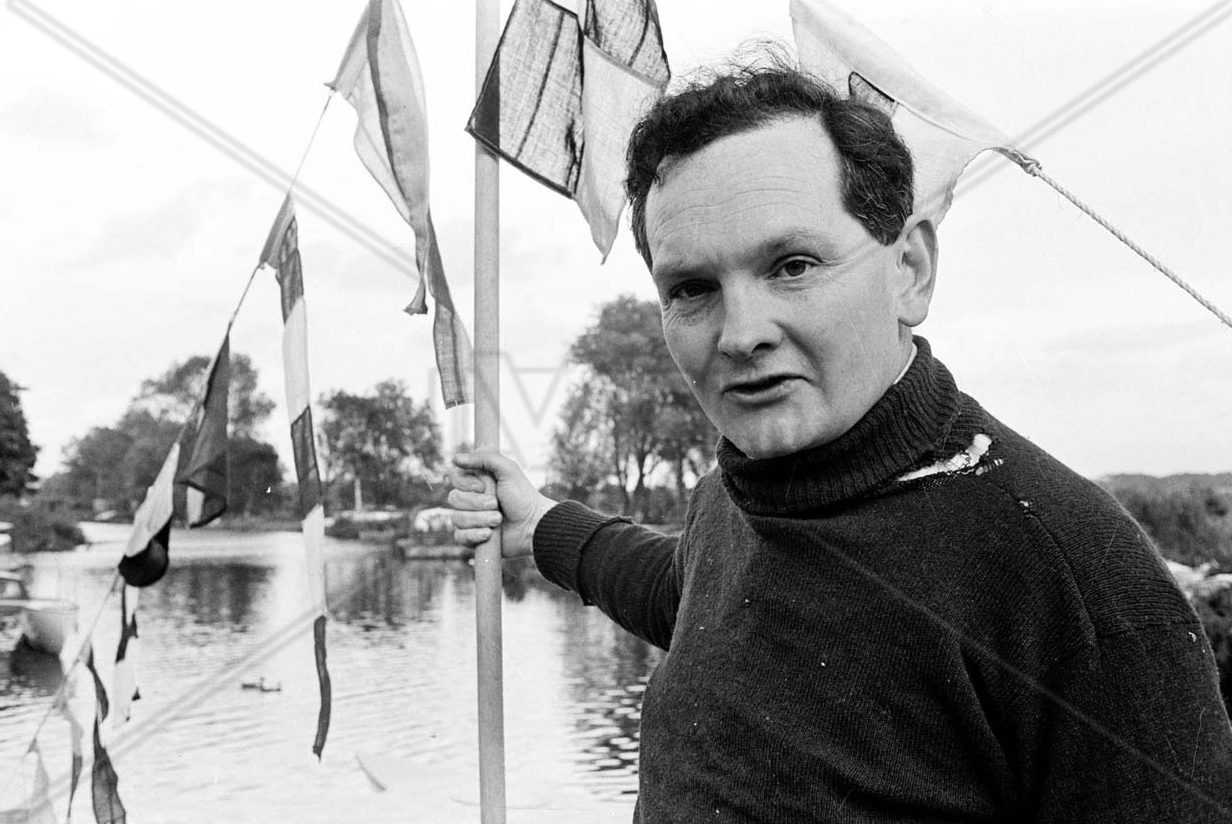 “There are many similarities between carrying a small boat and living. You leave totally unprepared, you have a long journey ahead of you that you think will never end. You know a series of triumphs and defeats. And suddenly you realize that what is done is done. The mistakes you have made are indelible“.

It is 1968, the year before Francis Chichester circumnavigated the world solo, and ocean fever breaks out in England. The Sunday Times newspaper launches the challenge: the fastest man to circle the globe nonstop and unassisted will win a £5,000 prize. Any interested sailor must depart in his or her own vehicle from any English port by October 31, 1968. Nine men accept the challenge. Among them was an unknown electronic technician, Donald Crowhurst, in fact. 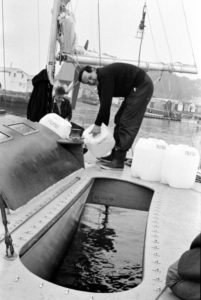 A DREAMER WITHOUT EXPERIENCE
Born in the British Indies in 1932, Crowhurst spent a lonely childhood in Asia. When he and his family moved to England, he soon lost his father and began working as an electronics technician, founding his own company but always juggling various financial problems. An amateur sailor, he also tries to patent numerous electronic boating instruments, without success.

The Chichester feat strikes his imagination, and the prize money proposed by the Sunday Times does the rest: Crowhurst wants to participate in the Golden Globe Race. The first problem, which is not insignificant, is finding a boat, and for two months he stubbornly attempts to obtain the use of Gypsy Moth IV, the sixteen-foot Chichester, which the English baronet himself had referred to as “the worst boat to sail alone in.” This attempt having failed, incredibly Crowhurst finds a real sponsor to build his own boat. He is Stanley Best, an RV builder, completely unfamiliar with boating.

“My wife says I must have been crazy. I did it, I guess, because of the appeal of that idea, because of the publicity and excitement and Donald’s ability to persuade. On balance, round and round, you really have to say that he was an extraordinary man, and as convincing as any other,” Best says years later. 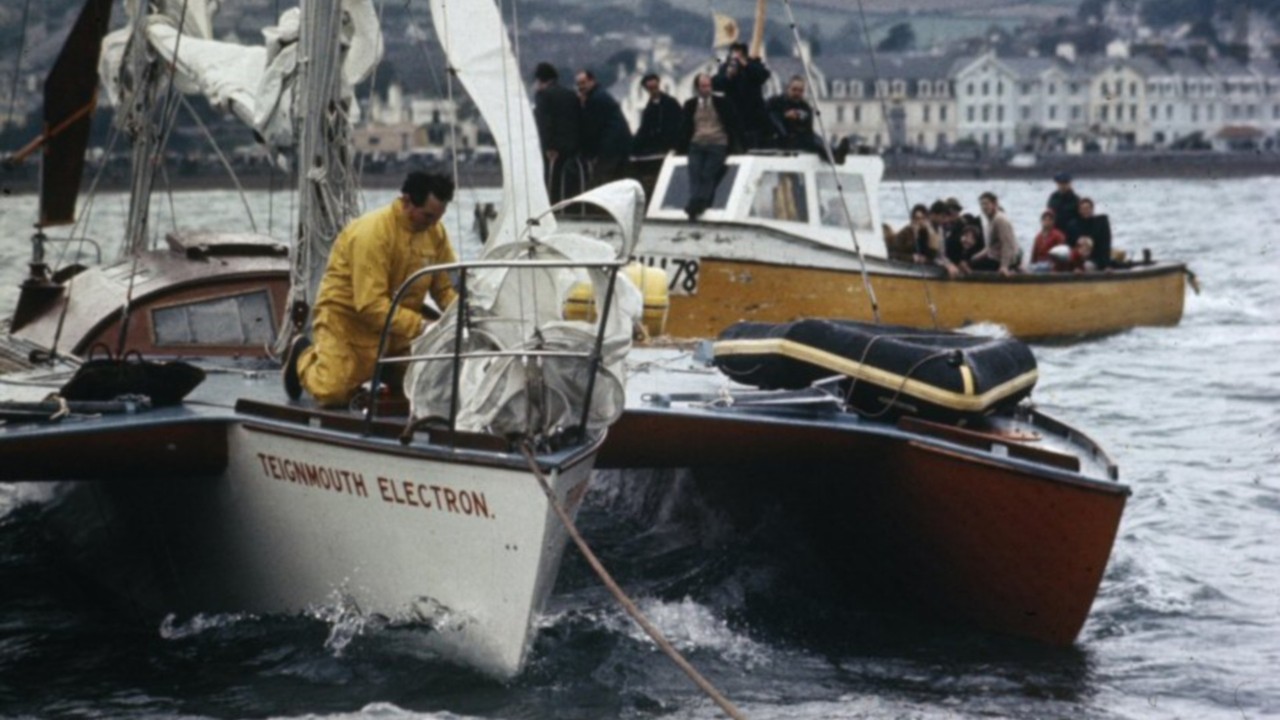 A “REVOLUTIONARY” BOAT
However, Crowhurst is far behind the other competitors, who are already ready to set sail, and is betting big on one idea: to build a trimaran to harness its speed and make up for lost time. He is not interested in being first overall, but the fastest, which would guarantee him winning the prize money.

Thus began, in a hurry, the construction of Teignmouth Electron, which took to the water in late September. His maiden voyage, from the shipyard to the small town of Teignmouth, from which Crowhurst intends to set sail on the venture, makes it clear just how botched the project was: the planned sailing of three days, is instead two weeks. Moreover, Crowhurst proves that he does not have a great sea foot, falling overboard twice.

THE UNHEARD CRY
Crowhurst, at this point, has only two weeks to fine-tune the boat, the Oct. 31 deadline inexorably approaching. On the deck of the trimaran, supplies are piled up almost in bulk, while a BBC crew follows the preparations uninterruptedly. The story of an unknown and inexperienced sailor, pushed by newspapers and television, is igniting the imagination of British people. Crowhurst, in his heart, knows that the boat is not ready, and neither is he.

“Honey, I’m very disappointed with the boat, It’s not good. I’m not prepared,” he confided to his wife on the night of Oct. 30-31. “If you give up now, will you be unhappy for the rest of your days?” asks Claire. Donald does not respond, but bursts into tears. He cries until morning, sleeping less than five minutes. “What a fool I was,” Claire later confided. “I didn’t realize he was asking me to stop him. He had always been so amazing at putting things right in times of crisis, that I couldn’t imagine he couldn’t do it again. And so I did not heed his call. What a fool I was!” 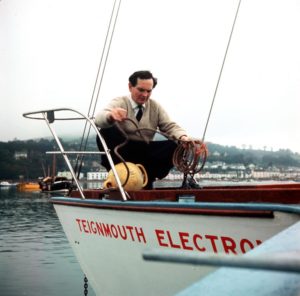 IN A TIE AT THE START
In Teignmouth Harbor a small crowd gathered the next day to greet the man who, wearing a yellow oilskin and still wearing a tie, was about to brave the oceans. Problems were not long in coming: the boat is proceeding at an exasperatingly slow pace, traveling about 60 miles a day, less than half of what was planned. Above all, along the descent of the Atlantic, it begins to take on water. Facing the Southern Oceans appears suicidal.

Despondency seized Crowhurst: going back, he would be ruined; going forward, he would die. Even back home in England, enthusiasm wanes, until–until a telegram arrives: “Darted south, 243 miles traveled in one day.” Suddenly the wind seems to change, Crowhurst smashes one record after another, every achievement seems possible again, newspapers relaunch the great adventure. The run-up to the top of the rankings proceeds apace, the Indian Ocean is crossed in a flash. But it is all false. 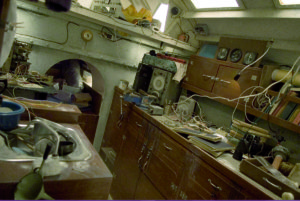 THE GREAT FICTION
Crowhurst actually never leaves the Atlantic. What he really had in mind, starting to send false coordinates, we do not know. What begins as an attempt to stall in the face of failure turns as the months pass into a dramatic struggle with himself. Slowly approaching the coast of South America, where the idea of waiting for competitors to arrive, to queue up with them and pretend to complete the race begins to take hold.

But this plan also fails. Crowhurst is forced to land in Argentina to repair the hull plating. When he resumed the sea, ahead of him Robin Knox-Johnston arrived first in England, but Crowhurst appeared, to all eyes, still competing with Bernard Moitessier and Nigel Tetley for the fastest circumnavigation. Crowhurst only needs to arrive, not as a winner, to avoid having his logbooks checked by the judges.

It would still be, in the eyes of the world and especially the sponsor, a positive result. Instead, Bernard Moitessier, in a gesture that will make him immortal in the eyes of dreamy sailors the world over, when he now has victory in his grasp, turns the prow southward and makes another nonstop halfway around the world to Tahiti. Nigel Tetley, for his part, wrecks with 1,000 miles to go. 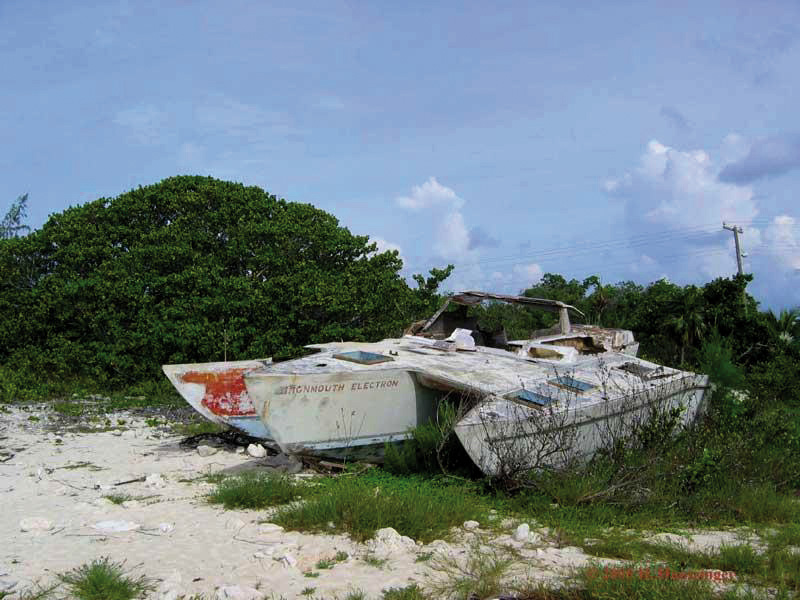 THE HERO WHO WILL NEVER COME
The unthinkable has happened, Donald Crowhurst is expected back home as a hero, over 100,000 people are ready to welcome him. But aboard Teignmouth Electron, by now madness is eating away at the Englishman’s mind. In the last two weeks of sailing, he fills the ship’s logs with 25,000 delirious words. His last notes were dated July 1. On July 10, the trimaran is found abandoned adrift off the coast of the Bermuda Islands, and the deception of the dramatic voyage discovered and revealed to the world. Donald Crowhurst’s body was never found. Want to learn more about Crowhurst and the legendary race around the world, the Golden Globe of 1968? For you there is “Adventures and Myths in the Seas of the World.” There are adventures worth telling and remembering. For this we drew on our historical archives and selected stories of people and sailings that have made sailing history. We tell you about them with extraordinary images and exclusive texts in our new special issue “Adventures and Myths in the Seas of the World.” From Jack London to Joshua Slocum, via Moitessier, Tabarly, Robin Knox-Johnston, and Peter Blake, all the greatest sea myths are collected for the first time in one special volume (only 7.50 euros). YOU CAN PURCHASE IT HERE

TWO EXTRAORDINARY ADVENTURES IN A PICTURE BOOK AND DVD
The two greatest adventures in sailing history on special offer: the DVD of the film Deep Water, which chronicles the first round-the-world voyage that introduced Moitessier and the madman Crowhurst, along with the splendid picture book “Around the World on a 20-foot Boat”, the account of the extraordinary feat ofAlexander Di Benedetto, the first man to cross the planet alone and nonstop in 268 days. DVD and volume will cost you only 23.90 euros instead of 33.80, a 30 percent discount. YOU CAN PURCHASE THEM HERE

PrevPreviousSimone Bianchetti, the sailor who would become a sailing legend
NextIs the port a mess? This summer I’m sleeping in Italy’s most beautiful roadsteadsNext
In evidenza 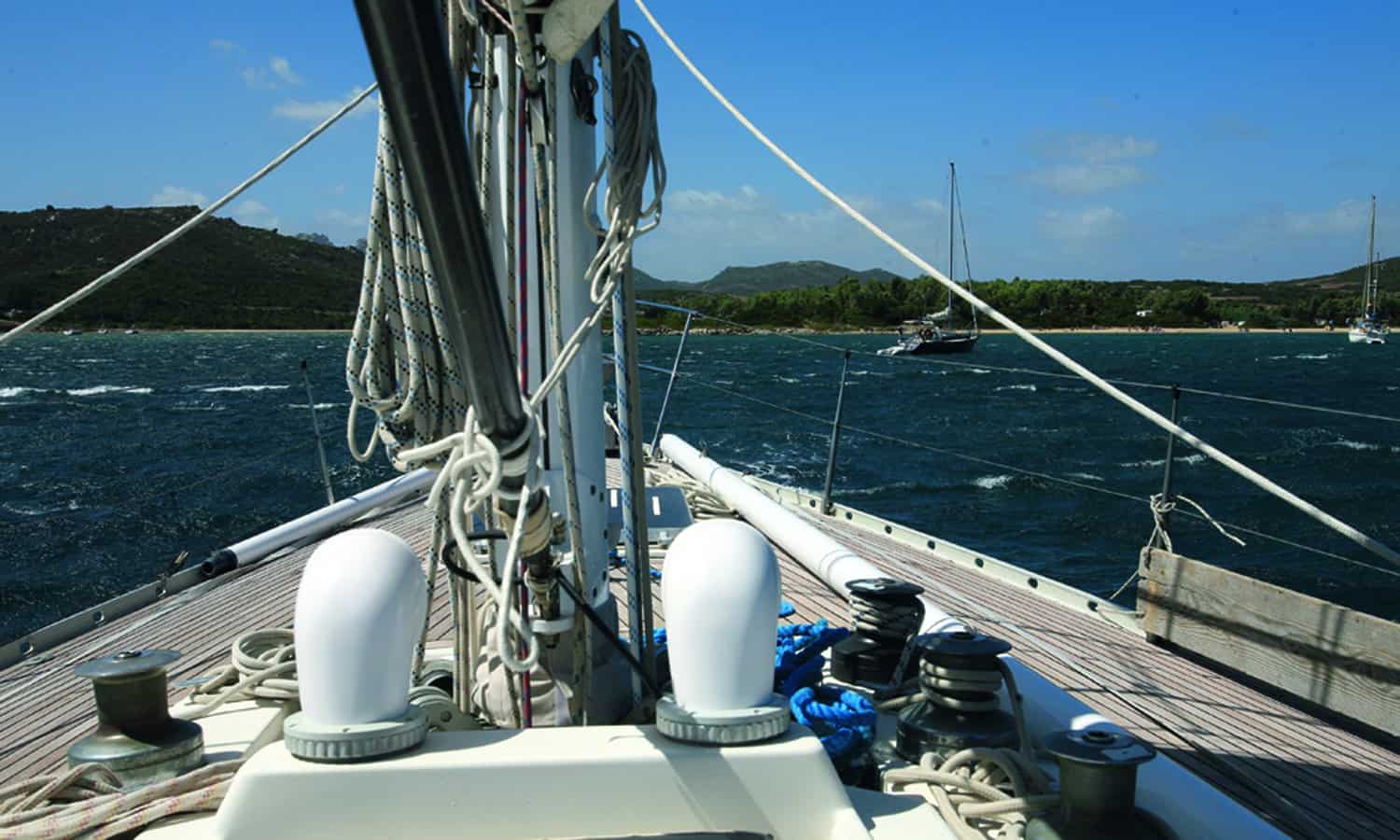