B&G Vulcan 5: our test of the smallest sailor’s chartplotter on the market 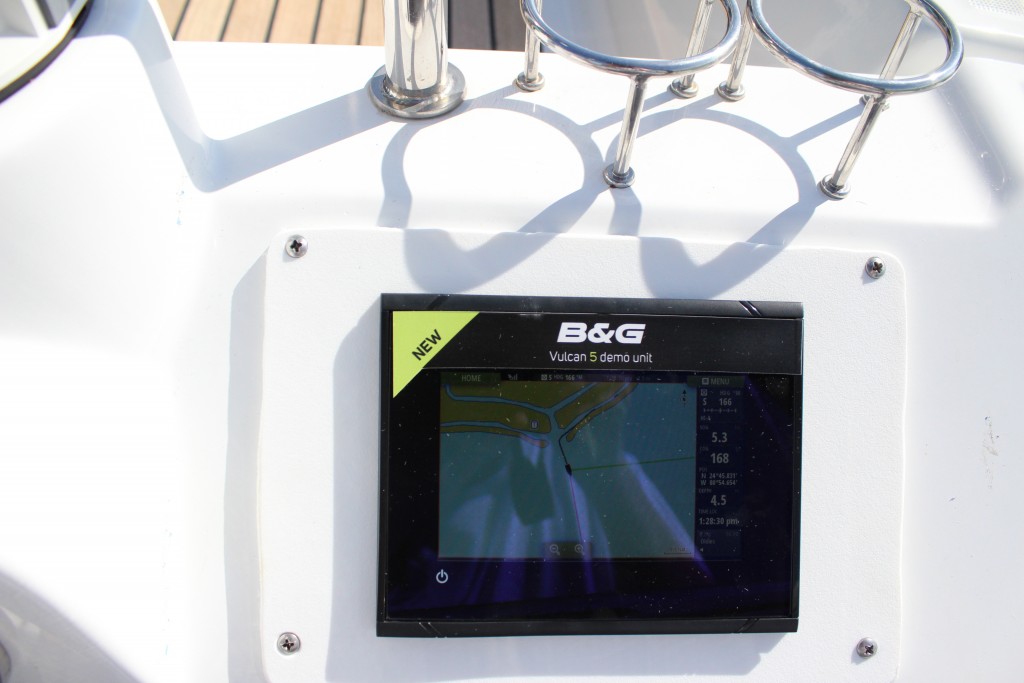 I am in Duck Key, one of the Keys islands in Florida. I was invited by Navico (the corporate that brings together the B&G, Simrad, and Lowrance brands) to test the brand’s latest electronic instrumentation offerings.

VULCAN 5, “CHEAP” BUT THOROUGHBRED
One, in particular, has piqued my interest since the launch press release. The new Vulcan 5, or the smallest chartplotter ever produced by B&G (5-inch screen), entry-level for multi-touch sailing equipped with all the features of the larger Vulcan 7 plotter, but in a more compact format. What struck me was the really attractive price: 549 euros. To this must be added the cost of a wind transducer to access all the B&G features dedicated to sailing. In its basic stand-alone sailing chartplotter version, Vulcan 5 offers all the standard navigation functions sailors have come to expect from B&G, including built-in GPS, waypoints, routes, and a choice of charting options, built-in autopilot control, and more. However, functions that need an Ethernet cable, such as Radar, AIS, weather forecast service, cannot be displayed.

OUR TEST.
The Vulcan 5 I am going to test is mounted aboard a Beneteau Oceanis 45, where a Vulcan 7 and the less recent Zeus2 Touch with 7-inch screen are also installed. The fact that it is mounted on a “cruiser” does not play in favor of the compact Vulcan 5, which looks even smaller than it actually is: that is why we recommend it, as a stand-alone instrument, on small and medium-sized boats. We go out to sea, and the wind certainly doesn’t let up: on the sea in front of the Keys, which reminds me a bit of the Adriatic, a northwest up to 20 knots of intensity arrives. Ideal conditions to test the two dedicated sailing features, Sailtime and Sail Steer, one of the B&G workhorses also replicated on the Vulcan 5.

SAILTIME AND SAILSTEER
With the SailTime feature, you can calculate the approach to the line and find the best side based on the wind. The first consideration that comes to mind is related to ease of use. The main screen is clear and intuitive, the various features immediately accessible, and there is the option to divide the screen up into various sections to keep an eye on as much data as possible.

Let’s turn to the SailSteer function on the chartplotter display, which allows you to see everything you need for optimal navigation in a single screen-compass (with a graphic representation of the boat in the center). The true wind angle (identified by a green arrow bearing the “T” for “True”), the position of the buoy (green dot), our angle (the number of degrees appears in a box on the bow of the boat), the COG (the direction of the start-point-finish-point conjunction, represented by a golden triangle), the direction and strength of the current (blue arrow in the center), the laylines with respect to the windward mark (whose position was previously saved, but you can view them even without an active waypoint), and, on the right of the screen, the time it takes to reach them. This is real-time data that varies as the wind changes, allowing us to know immediately whether we are sailing on the good edge or whether we should tack.

The whole thing also works while sailing aft. You can also get wind history to estimate the beve-term trend. Of course, thanks to the Gofree app (free download), you can view chartplotter screens on tablets and smartphones and control them remotely (except for autopilot, for safety issues). Time flies and it is already time to return to land. My impression is that the new Vulcan 5 has all the potential to establish itself as an entry-level product for those who, in addition to cruising and coastal sailing, also want to dabble in the world of racing. www.bandg.com