Take a beautiful blond California girl, a fifty-foot boat built in 1966, and mix it all with a surfboard, a cat, and the magical islands of the Pacific Ocean. What you will get is a fantastic journey, that of Liz Clark and her Swell.

A WORLDWIDE PHENOMENON
Liz, now 34, has been sailing around the world by herself since 2005-a long journey she chronicles in her blog, a kind of virtual logbook (you can find it at www.swellvoyage.com) that has made Liz a media sensation on the Web. Instagram, Twitter, Facebook, his social media profiles have thousands of fans. To give you an idea of Liz’s success whenever she is mentioned, when we told you her story on our website, you turned it into the most-read news story of the year. And the relaunch on our Facebook page was seen by over 145,000 people! Great diva results. 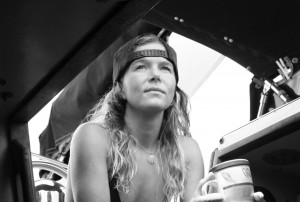 Liz learned to sail from an early age, when she would cruise with her parents among the islands of Southern California. Then the experience at age seven on dinghies, before the journey that would change his life: six months roaming around on a sailboat at age nine with his family, along the Mexican coast. “That trip really changed me. That’s when I fell in love with this lifestyle,” says Liz herself. “I wanted to dedicate myself to protecting the world from man-made destruction and to one day be the captain of my own boat.”

While waiting to be able to set sail for distant seas, Liz took up wave surfing and became a top athlete. The meeting that sets the course for good is with Barry Schuyler, an 80-year-old retired professor who has always dreamed of sailing around the world and who becomes Liz’s mentor. She, meanwhile, divides her time between surfing competitions and studying, majoring in environmental science and finding one boarding job after another to gain experience and learn to surf. The spark, the real big love, was sparked in 2004 when Liz met Swell, a Cal 40 (a design by Bill Lapworth) built by the historic American shipyard Jensen Marine in 1966.

FINALLY SET SAIL
Although the boat itself is in good condition, it takes nearly two years of work to make it ocean-worthy. Jobs that Liz is personally involved in. Finally, in October 2005, the long-awaited moment arrived: we set sail! Throughout the first year, the American sailor sailed along the west coast of Mexico and in Central America. In those first twelve months she was never alone: in turn, some friends took turns on board as crew. 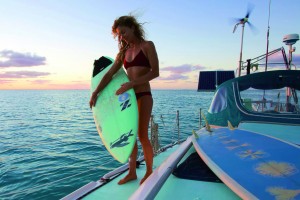 But the desire to separate herself from the world and the feeling that she could go into riskier situations in which she would never want to involve her friends made her choose, in 2006, to go it alone. Or rather, first she embarked on a twenty-day trip to the South Pacific together with her mother, then since 2007 Liz has sailed solo through the turquoise waters of French Polynesia and Kiribati. Just in Kiribati, Oceania, he also had to manage a leak, which was repaired thanks to the seafaring skills he acquired over time. To date it has completed 18,000 miles and shows no signs of wanting to stop.

HOW TO FUND THE ADVENTURE
Reading Liz’s story, you probably asked yourself the same question we did: but what money does she live on? The young Californian has shown a remarkable spirit of initiative, going out herself to find a number of sponsors, from clothing companies to companies involved in the ecological field, that enable her to continue her long journey. A journey that also earned Liz a place among the nominees for the prestigious “Adventurers of the Year,” the award given annually by National Geographic magazine.
Taken from the June 2015 GdV