We have come to the ninth and final installment of this series of articles on onboard power generation, edited by Roberto Minoia.

THE IMPORTANCE OF BATTERIES
Today we are going to talk about the most important part of the system, the part that allows the energy produced by the various sources to be stored. Electric storage technology has evolved very slowly in recent decades. The batteries we use in our boats today are not much different from those used 40 or 50 years ago. Rather than increasing the capacity to store energy (so-called energy density) or the ability to withstand deep discharge cycles, innovations over the years have rather given rise to products that are more resistant to vibration and use in extreme conditions (at an angle, for example) or to the recovery of gases produced during recharging, thus giving rise to sealed and thus maintenance-free batteries.

AS IN THE 1950S
Everything else is virtually unchanged over the years: still today, as in the 1950s, we use batteries consisting of lead plates immersed in an electrolyte composed mainly of an aqueous solution of sulfuric acid. The batteries used today to power on-board services belong in 99 percent of cases to one of these three categories: liquid electrolyte, AGM or GEL. 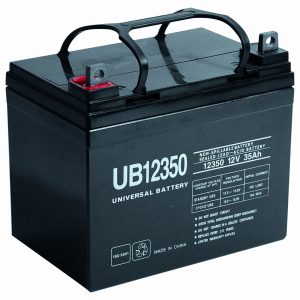 LIQUID ELECTROLYTE SYSTEMS
They are the simplest and also generally the cheapest. In them, the electrolyte is stored in liquid form and therefore to avoid possible problems due to acid spillage, they must be used flat or at least at small angles of inclination. There are so-called “maintenance-free” products, but still it is good to check the electrolyte level periodically to avoid irreversible damage to the accumulator. This type of product is generally not very resistant to shocks and vibrations, so on board a boat it is best to opt for so-called “Heavy Duty” or “Super Heavy Duty” models, in which the lead plates are partially protected from stress breakage. The problem of maintenance and use in critical conditions has been overcome with the advent of AGM and GEL batteries. 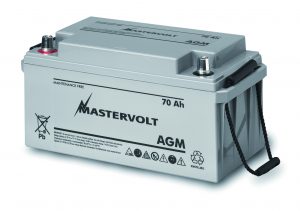 AGM BATTERIES
In AGMs (an acronym that stands for Absorbent Glass Mat) sulfuric acid, instead of being in liquid solution is used to soak a kind of fiberglass “sponge” that wraps around the lead plates, thus achieving a threefold effect:
1. greater resistance to shock (shock and vibration) as the fiberglass armor protects the plates and prevents short circuits,
2. real lack of maintenance (no liquids inside)
3. can be used at any inclination: even completely inverted.
AGM batteries, because of the way they are made, have an additional advantage over liquid batteries: they can be charged faster by supplying them with a higher intensity current, without danger of damaging them. 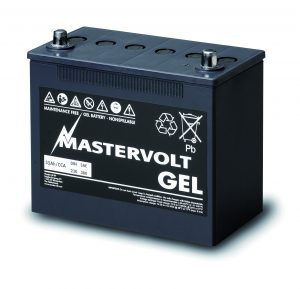 GEL BATTERIES
Gel batteries share the same advantages as AGMs in terms of robustness and versatility of use, except that the electrolyte in this case is a dense gel within which lead plates are immersed. The gel, however, is more delicate and can be damaged by gas bubble formation if too high a voltage is applied during charging. Basically, you need to make sure you have a charger that can be set up to charge this type of battery. So beware of alternator voltage regulators, which are often quite simple components and in some cases may send too high a voltage that would ruin gel batteries. Another disadvantage of this gel technology is that the inrush current in these batteries is not very high and therefore they are not suitable for use in engine starting. In contrast, they have many plus points in the use for which they are specifically designed, including high voltage stability and excellent resistance to discharge cycles.

LIMITS OF LEAD-ACID BATTERIES
Lead-acid batteries, whether liquid electrolyte, AGM or gel batteries, unfortunately all have major limitations. The main one is that their lifespan, measured in number of charge and discharge cycles, is rather limited and always dependent on the so-called “depth of discharge” (also referred to as DOD, or Depth Of Discharge). In other words, the useful life of one of these batteries will be all the greater as we are careful to avoid over-discharging it as much as possible. Taking into account the fact that a lead-acid battery is considered 100 percent charged when the voltage at the two poles, at rest, is about 12.8 volts, it would be advisable to never let it drop below 12 volts-corresponding to a residual charge of about 50 percent. Some batteries withstand deep discharge cycles a little better than others, but this does not detract from the fact that they too will live longer if they are discharged a little. 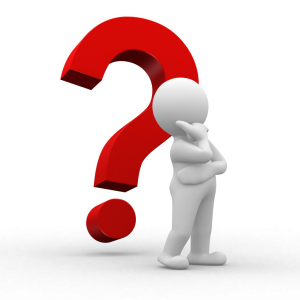 HOW TO NAVIGATE THE CHOICE?
So how is it possible to choose a battery suitable for shipboard services, i.e., a battery that withstands deep discharge cycles well? Well, one is generally inclined to think that the choice must necessarily fall on an AGM or Gel battery. In reality, this is not always the case, and although batteries with these more modern and expensive technologies are often made of excellent quality materials and therefore meet the characteristics we seek, it is also true that there are liquid electrolyte batteries on the market that are much better than some AGM or gel batteries. Generally, I can tell you that the resistance to deep discharge is directly proportional to the thickness of the lead plates. So, between two batteries of identical capacity, a good way to navigate is to choose the one that weighs more. This sounds like a platitude, but it is often the case. Of course, weight is not the only factor in choice. To do one thing right one should carefully read the parameters provided by the manufacturer, the most important of which is the theoretical number of charge/discharge cycles of the battery. But beware: in order to compare two different products, you must make sure that this figure refers to the same DOD (depth of discharge). In fact, as mentioned earlier, any battery will have a shorter life if it is often deeply discharged. 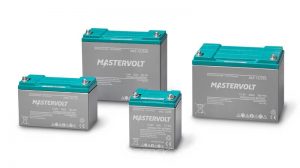 LITHIUM BATTERIES, THE NEW ERA
For some time now, batteries have appeared on the market that finally mark a major evolution from the old technology. These are the lithium-ion batteries. These types of accumulators have quite a lot in common with those used for years in cell phones and other consumer products, of which they are in a sense a logical evolution, aimed at increasing safety. That’s right, because while Lithium batteries possess many interesting features, which we will see shortly, on the other hand they have the nasty habit of being chemically quite unstable, and under certain extreme conditions it can happen that they literally explode, especially the high-capacity ones. This is why they are not used in the area we are most interested in. Lithium batteries that are used in the marine and other industries today are mainly those called “Lithium Iron Phosphate,” or LiFePO4, which are safer than other Lithium-ion or Lithium Polymer batteries.

These batteries are a real revolution compared to “traditional” lead-acid batteries, in that not only do they weigh half as much for the same capacity, but they endure deep discharge cycles very well, providing a significantly longer average life: up to 4-5 times longer than an excellent lead acid battery. Just to give some numbers, think that a LiFePO4 battery can withstand over 2000 discharge cycles to 90%, when a very good lead-acid battery can go up to 800 cycles but with discharges that do not go beyond 50%! The downside is that these lithium batteries are still very expensive. It must be said, though, that since they can be discharged to 90% of their rated capacity, the total capacity of our battery bank could be almost halved. A good 200 Ah AGM battery costs about 500 euros, weighs 60 kg, and lasts 6-7 years if used well. This could be replaced by a 100-120 Ah LiFePO4 battery, which costs 1200-1500 euros, weighs 15 kg, and lasts 20 years. All in all, on balance, it can also be a convenient choice, right?

THE NEAR FUTURE
In recent years, the demand for high-capacity, lightweight, efficient, and long-lasting batteries has increased tremendously. Just think of the exponential increase in sales of electric or hybrid cars. Some big companies-Tesla and Google first and foremost-are investing literally billions of dollars in research, and the results are starting to come in. There is now talk of Lithium-Silicon batteries, which could become a reality as early as 3-4 years from now, promising energy densities-that is, amounts of energy per kilogram of weight-until now unimaginable. Just think that there is talk of making 200 Ah 12-volt batteries that will weigh only 5 kg instead of the 60 kg of current lead-acid batteries! Without sacrificing-and indeed improving-on the excellent characteristics of current Lithium batteries in terms of durability and resistance to deep discharge cycles. In short, the near future will finally hold some positive surprises for us. We just have to wait confidently.

WHO IS ROBERTO MINOIA
Roberto Minoia has combined his passion for sailing and technology at www.blogdellavela.it. You can write to him at roberto.minoia@gmail.com