Bart’s Bash at the start: also lined up Luna Rossa and Azzurra

The Cagliari Yacht Club and Windsurfing Club Cagliari, with technical support from the Luna Rossa Challenge team, have joined for tomorrow (Sept. 21) the first edition of the Bart’s Bash, a world-scale event organized by the “Andrew Simpson Sailing Foundation” in memory of British sailor Andrew Simpson who passed away last May 2013.

MANY OF BERTELLI’S MEN IN THE REGATTA
Tomorrow, in fact, more than 750 sailing clubs and more than 11,000 sailors from all over the world will race in different classes of boats-from dinghies to cabin cruisers, monohulls to multihulls or sailboards-in memory of the Olympic champion. The purpose of the event, in addition to the commemoration of the late champion, is to raise funds for the Foundation dedicated to Andrew Simpson, whose aim is to spread sailing among young people. More than 300 sailors are expected to attend the event in Cagliari, including several Luna Rossa crew members-Max Sirena, Francesco Bruni, Chris Draper, Bora Gulari, Alister Richardson, Manuel Modena and Pierluigi De Felice-have confirmed their attendance.

MAX SIREN: I WILL PARTICIPATE WITH MY SON.
Max Sirena commented, “The Bart’s Bash is a beautiful project, the best way to remember a great champion as well as a friend like Bart Simpson. We thank the Cagliari Yacht Club and the Cagliari Windsurfing Club for immediately and enthusiastically joining the initiative. More than a fierce America’s Cup-style regatta, it will be a great celebration of sailing, and as a testament to the spirit of the event, I will be participating with my 6-year-old son Lorenzo; we will still strive to win!”

AZURE ALSO ACCEPTED THE CHALLENGE
But Luna Rossa is not the only “emblazoned” team taking part in the competition: tomorrow will be the last day of racing at the Royal Cup in Ibiza, and the Andrew “Bart” Simpson Memorial Regatta will be held simultaneously around the world. The TP52 Azzurra will also be there. Vasco Vascotto, tactician: “Azzurra will also be on the water for the Bart’s Bash., in memory of a friend of all, Andrew Simpson. This will also be an opportunity to contribute to the foundation that bears his name; we will do our part as a crew and I invite our fans to ‘get on board’ Azzurra.” 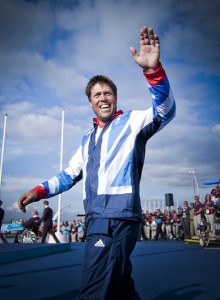 BART’S BASH, THE REGATTA OF RECORDS
Organized by the Andrew Simpson Sailing Foundation, the organization set up in memory of the great sailor who died following the terrible Artemis accident at the last America’s Cup, the Bart’s Bash (Andrew was called ‘Bart’) aims to be a “global regatta” which wants to enter the Guinness Book of Records in participation numbers (and raise money for charity).

THE IDEA OF BART’S BASH
The idea came from an article by British journalist Andy Rice who wondered, “I wonder if there is a possibility of running a regatta simultaneously in all clubs in the country. Almost every club organizes a regatta on Sunday morning, with boats of the most diverse classes, why not combine all the results and have a big Sunday regatta?”

HOW IT WORKS.
The original plan was to have only dinghies participate, but the great demand from many yacht clubs to participate made the event extend to larger boats as well. Bart’s Bash ihas thus become the first worldwide event with the goal of bringing together sailors from different yacht clubs in the country, from other countries, and from other continents, who can all race together in all classes, from dinghies to big boats and multihulls. A quest is underway to define which is the world’s largest regatta recorded by the Guinness World Record. But suffice it to say that the Isle of Wight’s Round the Island regatta involves 30,000 sailors, so the goal will be to have at least more than 50,000, which is five times more than originally planned.