There is one regatta that every sailor must participate in at least once in his or her lifetime. This regatta is the Barcolana, organized by the Barcola and Grignano Sailing Society. The largest sailing festival in the Mediterranean and the most “crowded” regatta in the world, with thousands of boats participating every year (record number of entries in 2018 with 2689 boats competing) transforming Trieste into the sailing capital of the world.

Everyone can participate in the Barcolana 54

This year’s 54th edition (October 1-9: it is packed with side events that we will tell you about later) culminates with the “highlight” regatta, the Barcolana presented by Generali, scheduled for Sunday, October 9. Registration is open to all boats, excluding dinghies. From Mega Yachts (24.01 m and up) to Class IX (boats under 6.45 m), with rankings also dedicated to traditional boats such as flounder and goiters and Meteor monotypes. 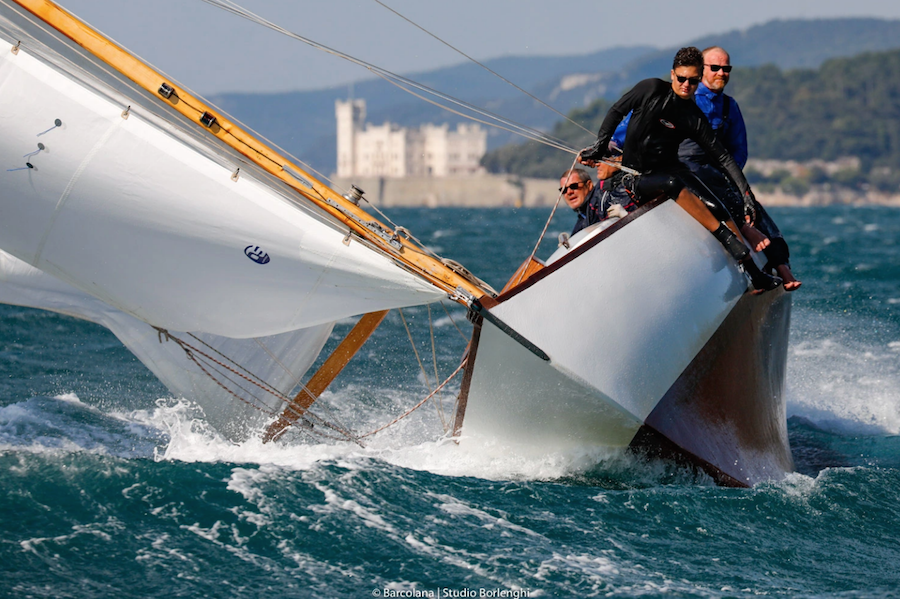 And the most famous Italian training ship, the Amerigo Vespucci, will also be there!

Barcolana 54 – If your boat is cruising?

Do you have a cruising boat, designed for “comfortable” sailing? Don’t worry: at the Barcolana you can take great satisfaction, because you can enter her in the Cruising class in her category and you will also compete in this classification. How to tell if your boat is cruising? It must meet two requirements:

Barcolana 54 – The course and the village

The regatta course opens and concludes with a veritable catwalk in front of the city of Trieste. It is a quadrilateral with fixed vertices positioned in the Gulf of Trieste, with a total length of 13 nautical miles.

The start is set for 10:30 a.m. and the line is positioned between Barcola and Miramare; proceed 210 degrees, for 4.3 nautical miles, until reaching the first buoy, then follow a 0.90-mile disengagement, for 332 degrees. From Buoy 2 to Buoy 3, off Miramare Castle, sail 4 miles, then back toward Barcola, along the coast, for 2.3 miles. Off the Victory Lighthouse begins the final phase of the regatta, which leads the crews to the finish line: they sail 160 degrees until they reach, after a mile and a half, the Old Harbor Dam, where, in front of the Piazza dell’Unità, the finish line of the regatta is positioned.

Piazza dell’Unità and the Rive di Trieste will be the heart of the Barcolana Village, with exhibition spaces, concerts, exhibitions, activities dedicated to the public and the presence of infopoint and merchandising space. The InfoPoint, gadget and Barcolana collection sales areas will be open to the public from Saturday, October 1.

Barcolana 54 – All the other events you can attend

As we anticipated, the Barcolana is not just the October 9 regatta, but much, much more. In brief we reveal all the sea and land events (sailing and otherwise) that, from October 1 to 9, will enliven the Gulf of Trieste and beyond. We recommend, however, that you find out in detail the entire event program available on the website
www.barcolana.it
:

Barcolana – How the world’s most crowded regatta came to be

Back in 1969, a small group of Barcola marina enthusiasts asked, almost with hat in hand, the Federvela Authorities for a regatta. An end-of-season date is given, the second Sunday in October (because that earlier date is the scene for noble yachts with tonnage, state-of-the-art sails, ratings…). You run without compensation and without tonnage. Boats divided according to waterline length. Whoever comes first in real time wins. The group of friends makes the rounds of sailing clubs, insists on invitations, even prospects prizes in the form of bottles of wine.

Fifty-one eventually answered the roll call, on a sunny Sunday with the wind blowing lightly from the southwest, which Trieste fishermen call “garbin.” The first edition of what was then the “Autumn Cup,” later to become the legendary Barcolana, was won by Captain Piero Napp’s “Betelgeuse,” who learned to pull edges at the Trieste Sailing Society, and who served as bowman for years to his friend Giorgio Brezich, an eternal subscriber to the Italian Snipe title. Napp (who for the occasion embarks his wife, Umberto Rizzi and Aldo Vidulich) does not know that day that he signed with his Alpa 9 the first page of a great little sailing history.

He also wins because he borrowed the spinnaker of a third class, the “Samurai,” which almost touches the water, but offers exceptional and off-the-charts thrust in other races. His passion for the end-of-season regatta will never leave him again, and he never misses the event. No longer with his sailboat, but with one of his tugboats, the “Pegasus,” which has been hosting the Jury for decades. Real hospitality, not just a boarding, made up of participation and smiles, and delicacies packed by Mrs. Marisa’s hands. Piero Napp is the only one in the history of the Barcolana who has always participated with different vessels doing the race, in his own way, with a tugboat.

The Barcolana myth had been born.