Are you there or… wi-fi? There’s more than just the Internet on your boat 2.0 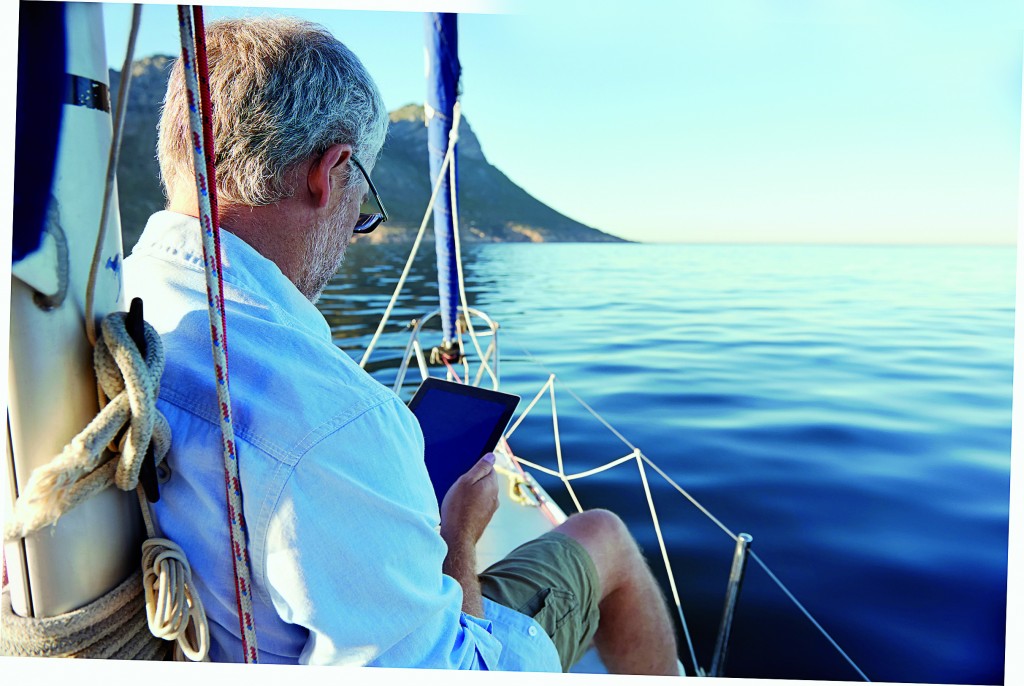 Everyone is asking for it, everyone is looking for it. But very few people know how it works, and it is easy to make gross mistakes that compromise its operation: we are talking about the wifi network on board. Having an efficient wireless connection on the boat can be a great help to you. Schematizing, there are mainly two possibilities that you will have access to with a good wifi system: the first will allow you to access the Internet from anywhere, in port as well as at sea. The whole crew can be connected at all times, with PCs, tablets, smartphones. Access to the external network (WAN, Wide Area Network) is via hot-spot, cellular network, satellite, or with Pactor modem connected to SSB radio. A considerable advantage is that, being connected to the Internet, with the latest generation plotters you can download Grib files and weather forecasts, as well as perform software updates. Then by creating a local area network (LAN) you can view on-board data wirelessly by interacting with the instrumentation. Any mobile device with wifi becomes a repeater of navigation data (often with remote control capability), or uses the data for specific applications, such as those for racing. Here we told you about 4G on board, now, together with an absolute expert in the field, Antonio Pezzoni of Nautigamma (which offers Wi-Boat wifi kits), we explain how to create a reliable network on board your boat: we start by focusing on the wifi antenna, the tool with which you directly interface your mobile devices (smartphones, tablets, smartwatches, PCs).

THE IMPORTANCE OF THE WIFI ANTENNA
“You may have noticed that in ports or just offshore, even if your device displays the marinas’ wireless network or other hotspots, the connection is often slow and intermittent,” Pezzoni began. “This is because the internal wifi antenna of smartphones and tablets is designed for mainly domestic use and is therefore not very sensitive. The problem is solved with an external marine wifi antenna. This is an antenna with a particularly powerful wifi radio module (the so-called “booster,” ed.) screwed onto it, which is the wifi interface to the outside and creates a kind of ‘bridge’ effect that can establish a connection to hotspots located on the coast even 2-3 miles away. In most cases, the radio module provides for sending the data already over Ethernet.” We are talking about omnidirectional antennas, capable of receiving a 360° signal (the boat is moving, whether sailing or at anchor: leave the unidirectional models on land!). Then make sure that the model you want to buy is actually marinized, meaning it is waterproof and designed to withstand the elements for long periods of time. 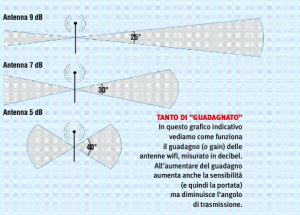 GAIN (OR GAIN), WHO WAS HE?
Next to the name of each model of wifi antenna, we find a number expressed in decibels (dB): the latter indicates the so-called gain (gain in English). In electronics, it denotes the ability on the part of the antenna to increase the amplitude or power of a signal: with very low gain, the antenna’s transmission will be “sphere-like,” i.e., projected laterally, above and below, but the receptive capacity will be reduced. As gain increases, sensitivity will develop in the horizontal plane, and the sphere will be replaced by an increasingly narrower but farther-reaching transmission disk. “On a boat,” Pezzoni explains, “we will not need antennas with particularly high gain, also because as the gain increases, the size of the antennas increases and the installation of a less compact device-we can get to antennas more than a meter long-is problematic. Let us therefore focus on models with gain between 6 and 12 decibels: on board it is necessary to have antennas that guarantee a wide receptive spectrum. A ‘good view’ that will allow us to connect to hotspots located at different heights.” 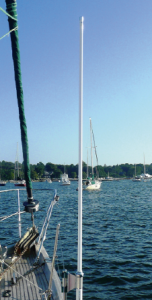 WHERE DO I MOUNT THE ANTENNA?
The effectiveness of an on-board wifi network is also determined by where the antenna is mounted: “Let’s dispel a myth right away: it is not necessary to install it at the masthead. Dealing with rather high frequencies, 2.4 gHz, you should know that it is very difficult to carry the signal with a normal coaxial cable, so it is good that the device is located in unpunto that does not require too long wiring (maximum 3-4 meters) to reach the radio module. In fact, it would be better if the module, as in the case of Wi-Boat kits, was directly screwed onto the antenna. If you can, avoid coaxial cable at all costs. In light of the above, the best places turn out to be on the mast, but at the first order of spreaders, on the rollbar, if any, or on the pulpit at the stern.” 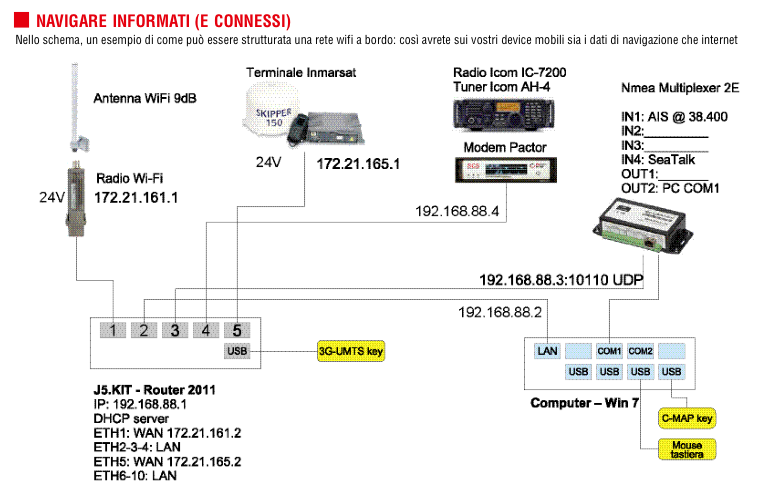 ACCESS POINT AND ROUTER
For the antenna to work, it will need a so-called access point (a point of connection to the local area network) or rather a router, the only possibility of access to the external network: the latter functions as a “sorting point” for local traffic (NMEA on-board data or from private protocols such as Raymarine’s SeaTalk, various applications) and external traffic (the Internet). As for configuration, “we could do it via the web through any mobile device by typing in the IP address of the router and the wifi radio module.” There is a classic mistake that is perpetrated by newbies, when wiring: “It may happen that the wifi radio module is connected, by mistake, to the LAN local network port of the router, when in fact it should always be connected to the WAN port: in this case we will not be able to access the Internet!” Double check the name of the port to which you will connect the Ethernet cable of the wifi radio module. “The router is also in charge of automatically establishing an Internet connection based on what it finds available, according to a precise priority. Primary access toward the web is attempted with the wifi hotspot; if it finds none, it switches directly to the telephone network, possibly even with a second SIM card if one is present, and lastly the channel to the satellite network is activated. This priority is the most logical when thinking about the cost of use.” 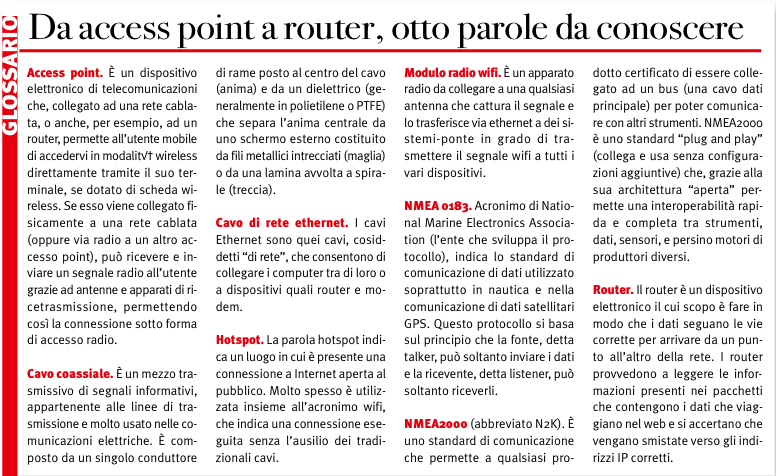 THE WIFI NETWORK ON BOARD
Routers, depending on the model, have multiple Ethernet ports. To one WAN port, we said, you will necessarily have to connect the wifi antenna to have access to the Internet, to the other LAN ports you can connect PCs, webcams, satellite terminals, Pactor modems. “In the evolved versions of routers,” Pezzoni concludes, “we will also find an NMEA 0183 serial port: thanks to this we will be able to receive and share data on the various connected devices of on-board instruments that use that particular type of protocol. For the NMEA 2000 interface, capable of connecting and relating data from instruments of different brands, or for private communication protocols such as Raymarine’s SeaTalk, it will be necessary to connect a multi-channel converter (the so-called multiplexer) to the router.” The router and radio module should be connected to the normal batteries of on-board services, with negligible power consumption (20-25 W, about 2 A).