10 catamarans up to 12 meters for long sailing

It is impressive how this market segment has evolved: ranging from quiet models, ideal for those who want to cruise leisurely, to those that put performance ahead of everything else. In common they have the great ease of use even if you are alone

Ten models chosen for you

The smallest of the pure cruising range from the French shipyard Catana (which continues to produce its carbon behemoths) was one of the most sought-after models of the last season. Most striking are the “fold-down” aft bulkhead and the fact that the actual cockpit is located in the bow. Lung. 11.88 m; wd. 6,72. www.adriaship.it 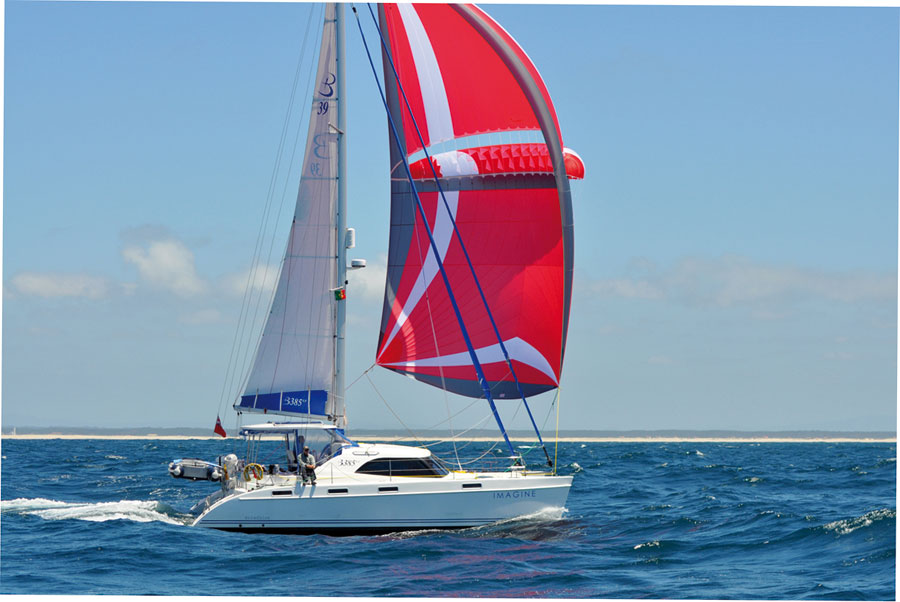 The British shipyard’s most popular model is expressly designed to be driven solo as well. The styling, compared to most other catamarans around, is Spartan. Lung. 11.96 m; wd. 5,98 m. www.broadblue.com 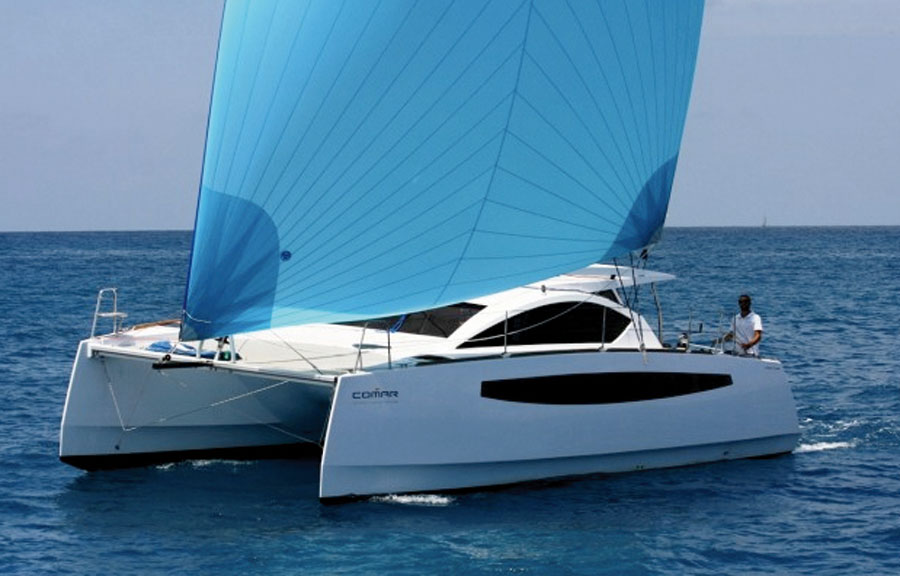 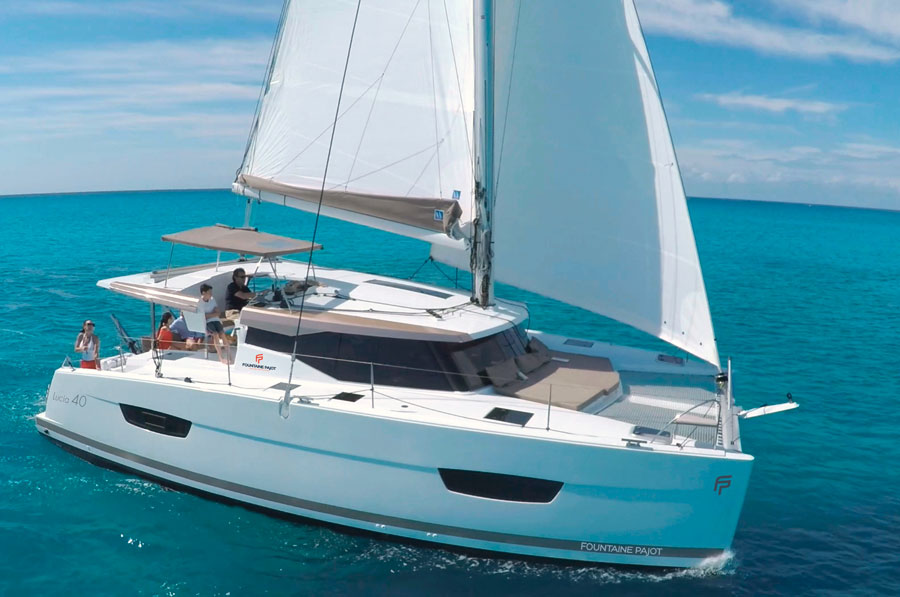 To date it has become the French manufacturer’s smallest model. The exteriors feature a raised helmsman’s station and in the bow the classic sunbathing area. Striking is the clean design of the square. Lung. 11.73 m; wd. 6,63 m. www.fountaine-pajot.com

The little one from the Apulian shipyard can rely on two 6 kW electric motors and a diesel generator (a system made together with Oceanvolt). Internally it is striking for its square–circular! Lung. 9.99 m; larg. 5,50 m. www.ladyhawkecatamarans.com 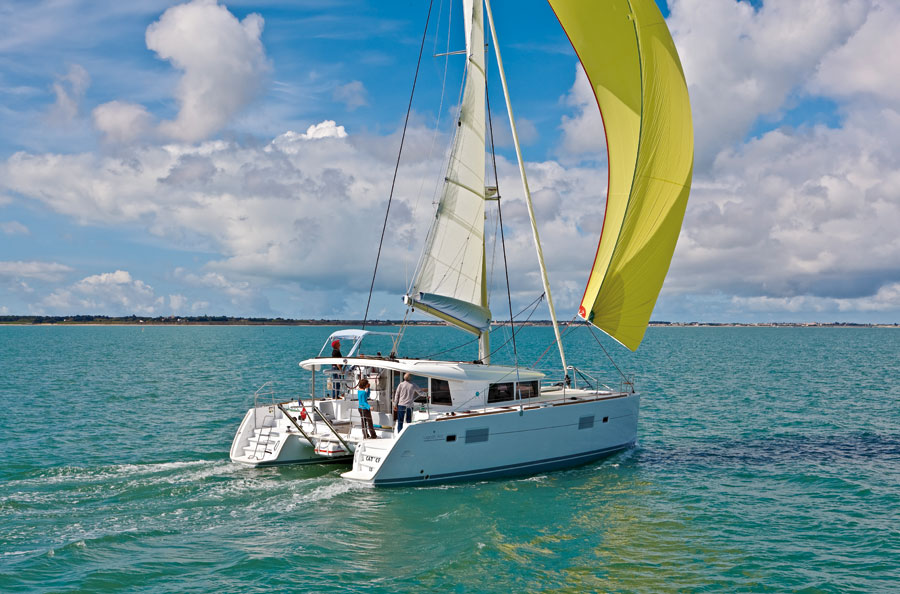 Considered a milestone in the industry, it is one of the first models on which the Nauta studio was able to eliminate separations between interior and exterior. Over the years it has been revisited several times to make it always relevant. Lung. 11.97 m; wd. 7,24 m. www.cata-lagoon.com 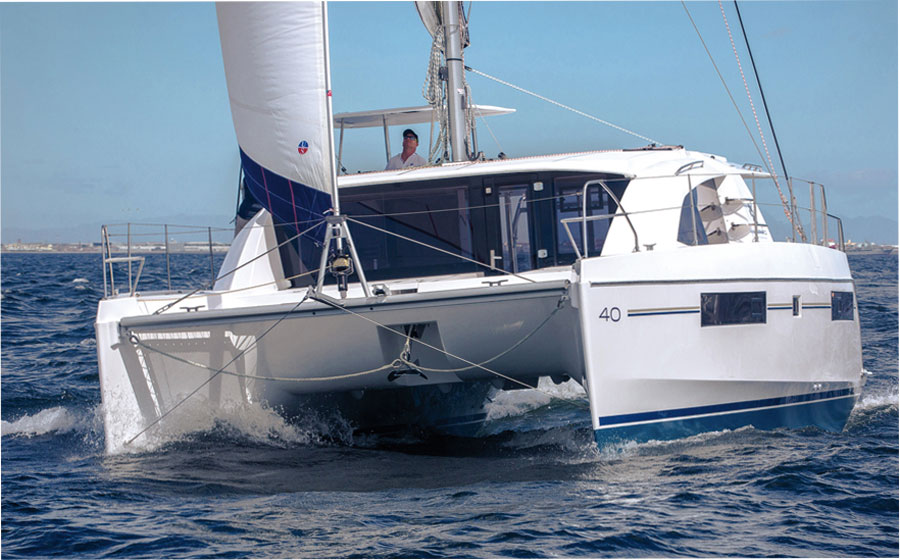 Arriving from South Africa is the smallest of the historic shipyard’s models; distinguishing it is a solution not often seen on these sizes, namely a door that provides access from the saloon to the forward area. Lung. 11.43 m; 6.04 m. www.leopardcatamarans.com 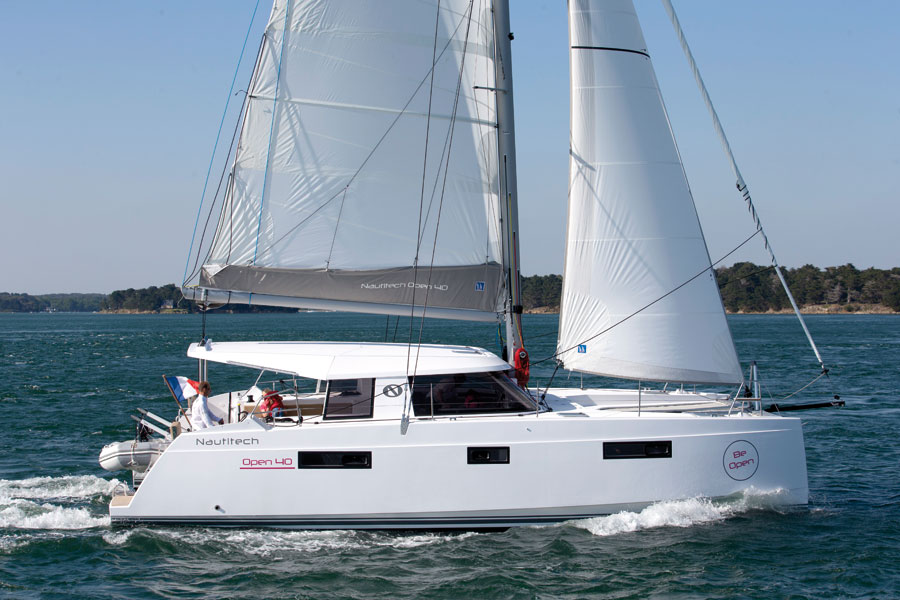 Double version for the little one from the shipyard that became part of the Bavaria Group. In both cases, the aim was to achieve a “monstrous” cockpit, thanks in part to the lateral displacement of the two helm stations. Lung. 11.98 m; wd. 6,50 m. www.yachtsynergy.it 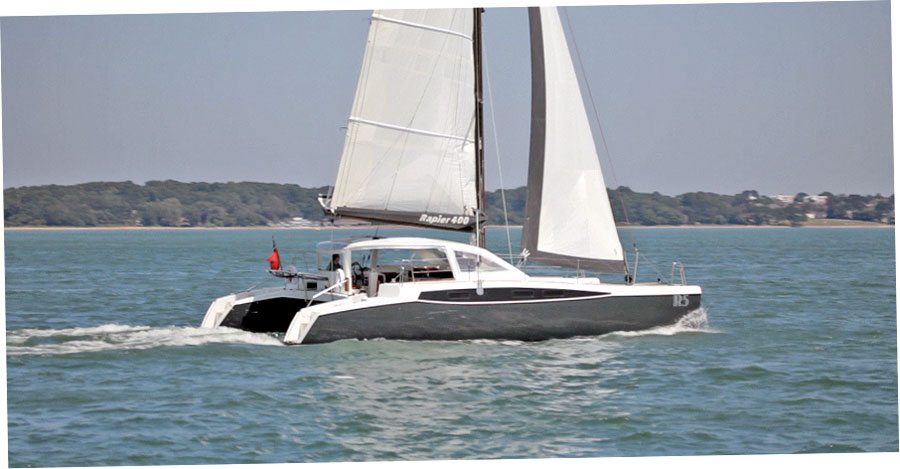 A model that perfectly embodies the concept of a habitable but high-performance catamaran: very light, it provides the carriers with the dual option between gennaker (80 sq. m.) and spinnaker (100 sq. m.). Lung. 11.99 m; larg. 6,70 m. www.broadblue.com 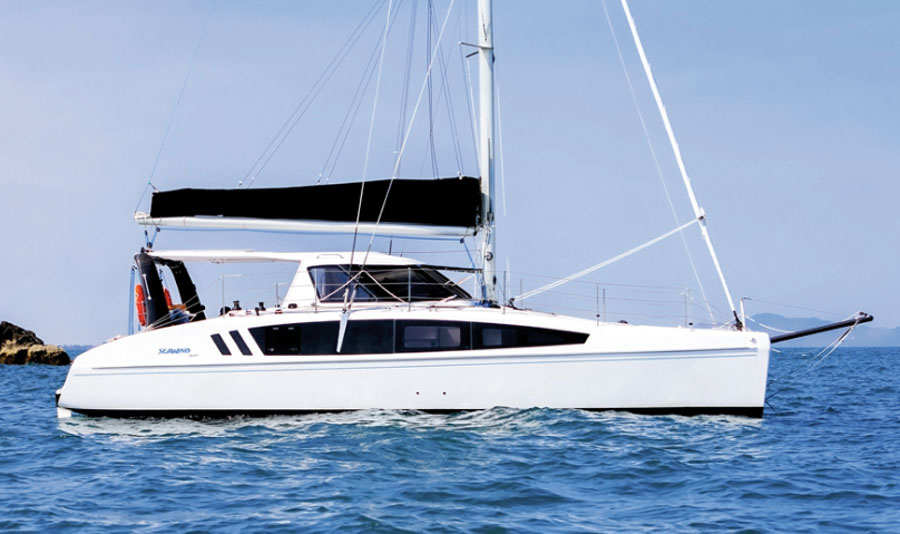 The new version of the most successful model (suffice it to say that it was introduced in 2004) from the Australian shipyard. A real must-have in the southern hemisphere, it is now peeping into our market as well. Lung. 11.60 m; wd. 6,50 m. www.seawind.com

Our analysis of the market up to 12 meters

What is the main difficulty faced by a designer and a shipyard when designing a small catamaran? Simple, being able to maintain those space characteristics without making a cathedral on the sea. To achieve this, the solution was to increase the beam and especially to change the design of the hulls. Inlets to the water remain fine, while what changes is their width to the stern. A solution that has allowed for spaces in the sleeping area that were once unthinkable.

The edge: essential for increasing spaces in hulls

A clarification needs to be made here: Virtually all models on the market can count on two versions, one dedicated to charter and one for owner use. The difference, of course, is in the number of cabins: many in the former, while in the latter one hull tends to be dedicated to the owner, who thus finds himself with a real suite, complete with a study (as well as a private bathroom, of course). Further adding to the space is the presence, on several models, of a deep edge. It does not, in this case, have a performance-related use, but serves to increase internal width while maintaining fine water entry lines.

DIFFERENT STYLES, SAME FOCUS: BRIGHTNESS AND SPACE
Especially in recent years, shipyards have made a great effort to bring some of the features that made the boom of the larger specimens to the under-12-meter models as well. Over all, undoubtedly, the multiplication of windows in the deckhouse and along the hull to exponentially increase interior brightness, including in the sleeping area. Some have even gone further, as on the Bali 4.0 Lounge, the smallest model in Catana’s young cruising range. Here, the bulkhead dividing the square from the cockpit is actually a drop-down hatch, which goes under the “roof” of the central superstructure, making the cockpit (itself small in size) an integral part of the square.

In the bow, on the other hand, many are opting to abandon the classic trampolines to make way for a second cockpit equipped with every comfort. On the other hand, a separate discussion should be made about the wheelhouse: its positioning varies first and foremost depending on the presence or absence of the flying bridge. In any case, there is a tendency to isolate it from the guest area, grouping all the necessary maneuvers in one place.

THE MARKET.
We start analyzing this segment of the market from two Italian realities. A historic shipyard such as Comar has in its range an 11.30-meter catamaran, the Comet Cat 37, designed by one of the industry’s holy monsters, Frenchman Marc Lombard, characterized by narrow hulls in the live-work that widen above to increase interior space. In contrast, the Apulian Lady Hawke has two models, of 33 and 37 feet. The latest addition is the 33 Eco Comfort: from the collaboration with Oceanvolt, an electric motor was developed with two 6 kW thrusters and a diesel generator: at a speed of six knots, it has a range of two hours in pure electric style.

At the bow, the presence of a second equipped cockpit greatly increases privacy on deck

The real struggle is especially in the 11-12 meter segment, where all major international competitors are present. A Lagoon (3 models under 12 meters) and Fountaine Pajot (with the farewell of the legendary Mahé 36 left with only the Lucia 40 under 12 meters) has been joined by the aforementioned Bali range of Catana, which also continues, however, in the production of its sportier models, built with extensive use of carbon. It then continues on its growth journey Nautitech, which, after joining the giant Bavaria, has just unveiled the flying bridge version of its 40-footer (in our opinion it may be even more successful than the open version).

Coming instead from South Africa is another historic catamaran shipyard, that Leopard, which has made its fortune mainly in the charter world, but which has been opening up in recent years to the “shipowning” world as well, as evidenced by the Leopard 40. Striking is a solution we usually see on larger models, namely a door leading from the saloon to the forward area. Opposite, but still distinctive, solutions are found instead on the Rapier 400 from the British shipyard Broadblue, practically an open, and on the Australian Seawind 1150, featuring a futuristic profile.