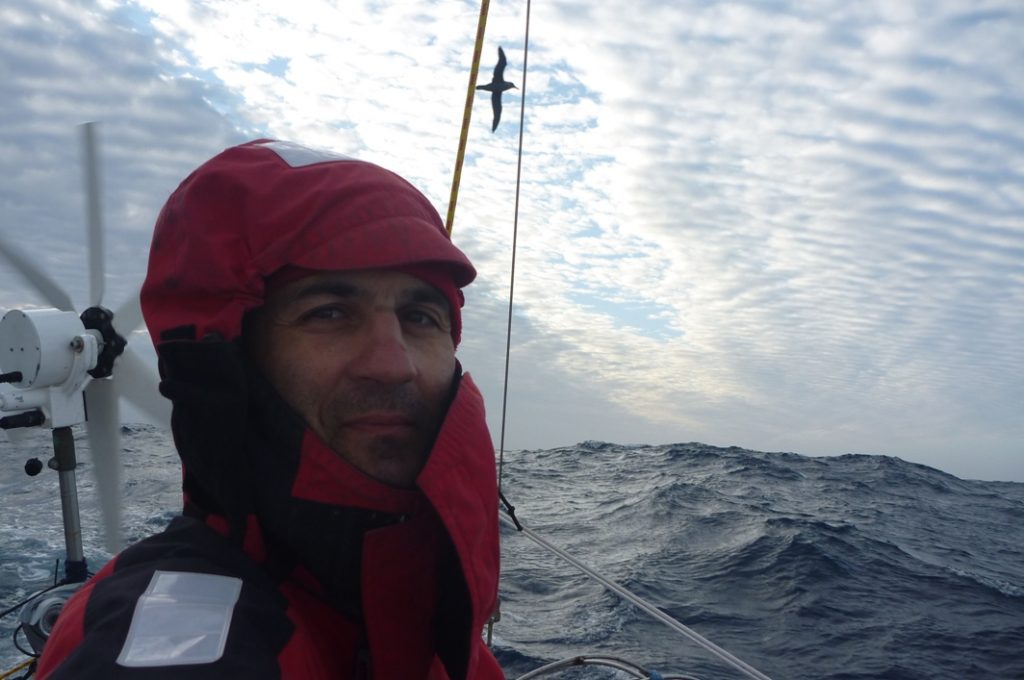 The idea of the round-the-world trip came on its own, of course, simply, during the 2006 transpacifica, solo on a beach catamaran, from Yokohama to San Francisco in 62 days.
But it is perhaps best to take a step back and tell a little more about myself. I was born in Rome on January 5, 1971, French mother, Italian father, Sicilian to be precise. I was able to keep both citizenships, Italian and French. I have a brother who is two years older than me. Until I was five years old, we lived in a house in the middle of the countryside near Zagarolo, a few dozen kilometers south of Rome. 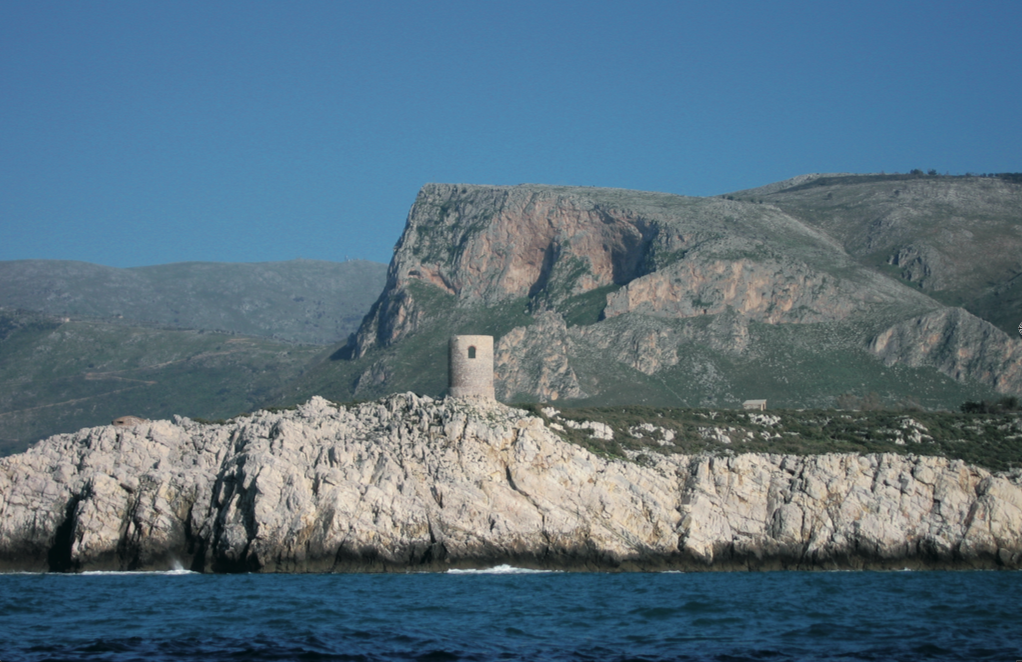 Then the move to Sicily where his paternal grandparents lived. We have always lived in Agrigento, known for its wonderful Valley of the Temples, a legacy of a glorious past. But the real landmark for my childhood was Giallonardo, a locality not far from the town of Siculiana.
The house, built by my grandfather “on the edge of a plateau, of blue clays, on the African sea” … I quote a poem by the Nobel laureate in literature Luigi Pirandello, who was born at Chaos, a few kilometers further east, the house, I was saying, and everything around it, were the fantastic world, the main setting of my childhood.

A small staircase led directly to the sea. What better invitation to jump into the blue to invent games, fish- ing, paint your body in clay like a little Tarzan, build bows and arrows, and at some point start sailing. My parents initiated me into sailing at the age of six, first by sailing dinghies and small beach catamarans, then by enrolling me in a real sailing course at the Italian Naval League in Porto Empedocle (in the province of Agrigento).

They had started out as self-taught, reading a manual “Sailing in 10 Lessons” and embarking on their first sailing with a Lightning, a five-foot-long, eighty-foot-long dinghy made of marine plywood.

Having purchased the little boat in Fiumicino, in stages but with only the aid of a road map, they had gained Sicily facing strong gales of which I still remember the sound of their stories. I think the taste of seawater and the world that moves around seafarers made its entrance into me in those years.
In 1979 my father set off on a crewed ocean race, the Parmelia Race, which would take him from Plymouth to the Australian coast via Cape of Good Hope aboard Anitra II, a French monohull of more than 14 meters that would end its story with a shipwreck just a stone’s throw from its scheduled arrival in Perth. In the meantime, the news received at home via telephone and with only radio links from the most disparate parts of the planet accompanied my days and merged with school assignments and sailing courses.

In 1982 my father was leaving to participate in a leg of the well-known Whitbread crewed regatta, which would take him from New Zealand to Mar del Plata in Argentina.
I meanwhile participated in Optimist regattas. They were fun, but the spirit in which I went to sea was different from that of the other participants. I never boarded the protest flag, which I would instead see soaring ready for use, secured under the boom of the dinghies of the most fierce. My motivations were other…

Having passed the age limit to participate in Optimist racing, my parents bought a small three-meter dinghy that we always kept in Giallonardo, then a Laser and finally some sailboards.
But it was at the age of 14 that I first found myself at the helm of a real boat working night shifts. I was a sophomore in high school when my father bought with friends a 12.60-meter Yawl, Olin Stephens design. My father had vo- lured my brother and me as crew to transfer the boat from Rimini to Porto Empedocle. It was also a great experience because, in order to carry it out, we had anticipated the summer vacation and thus the end of the school year by about a month.

Shortly before graduating from high school with honors, my parents, who had been separated for several years now, decided to divorce. My mother was going to live in France and I was also staying in Sicily to complete my studies. Reconciling my passion for sailing and my studies has never been easy, and for that reason I have also spent long periods without sailing. But I was in college when 1992 comes. Something special was brewing in my life, something that would leave its mark and begin long sailings in small Hobie Cat type beach boats, two hulls, one mast, the sails and no shelter.

So I find myself with my father talking about boats and the ways in which it would be interesting to cross the Atlantic Ocean. A big sailing project is being born: to cross the Ocean Sea, the Atlantic Ocean in two and to do it not with a cruise boat but with something unusual, a beach catamaran, just one of those catamara- ni that you see in resorts and normally suitable for short excursions under the coast, a Hobie Cat. Said and done. The preparation lasted several months until in July 1992, with my father we set off from the beach below our house to reach, not without difficulty, Martinique, in the French Antilles. A long journey through violent storms and an encounter with pirates.

Then the return to Italy and the completion of studies, graduation, military service in France in Hyères, certification to practice as a geologist, departure to Guadeloupe to work as a sailing instructor and entertainer, and fun as a fire-eater. And after six months in the West Indies, yet another breakthrough to pass a selection and work in a large oil exploration company, traveling between Cameroon and Indonesia and at the same time the ever-growing desire to cross the Atlantic, but solo.

I win a competition as a geologist at Inail, the Italian national agency for workplace insurance, give di- missions from the oil company and move to Bologna for the new job. I manage to accumulate vacation time and between 2001 and 2002 I complete two solo crossings, Italy-Canary and transatlantic nonstop and unassisted, again on a Hobie Cat, smaller than the 1992 Hobie Cat and less than 6 meters long.

The Atlantic crossing is endorsed by the World Sailing Speed Record Council/International Sailing Federation (WSSRC/ISAF) as an absolute world record.
Four years later, in 2006, I embarked on a new transoceanic, again on a small, uninhabitable catamaran, 5 meters and 96 centimeters long. This time the ocean I choose is the North Pacific, on a tough yet coveted route in the context of world record sailing, the Yokohama-San Francisco, which I happily complete, sailing from June to August 2006. The crossing is approved by the WSSRC/ISAF as a world record and World Record.

And it was in the middle of the Pacific Ocean that the dream of a round-the-world trip on a small boat came of age. I had confided my intentions to a few people before I left, but it was only in the middle of the ocean that I made the final decision to set out on the same 1969 Golden Globe route as soon as I found the means to do so.

Facebook Twitter Youtube Instagram
PrevPrevious#14 Summer reading. Around the world on a 6.50-meter boat. The Great South (the Great Southern Ocean) / 5
NextCrazy? No, Malingri. Father and son on an uninhabitable cat from Marseille to CarthageNext
In evidenza