Who wants to be lonely? Everyone! Rome for One membership continues to climb

If there were still any doubts about Italians’ appetite for solo sailing, the boom in enrollment in the new Rome for Uno, the solo-race open to all (and not just monotypes made for the course au large) that Circolo Nautico Riva di Traiano organizes in conjunction with the classic Rome for Two and For All. With less than three weeks to go before the start (set for April 6), there are 17 registered soloists ready to tackle the 535-mile course (from Riva di Traiano, through the Ventotene gate to Lipari, in the Aeolian Islands, and then back to Riva): two less than Rome for All and practically twice as many as Rome for Two.

WHO WANTS TO BE LONELY?
Are we also finally becoming, like the French and the English, a people of navigators? Let’s hope so: in the meantime, we announce that in the next issue of the Sailing Newspaper we will explain how to set off on your own for the first time with advice from Roberto Westermann, third at OSTAR. Westermann will be present, along with Lele Panzeri and loner Andrea Mura, at the TAG Heuer VELAFestival in Genoa (April 10-13) to tell you how to “Carry the boat alone: become a loner in a day” (that’s the name of the event). 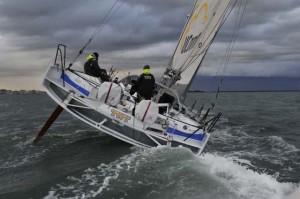 ROMA FOR ONE, FOR TWO AND FOR ALL: THE BAR IS RAISED
Back to Rome for One, Two and All. A total of more than 50 entries have been made, and the level of competition is rising day by day. For the record, the 17 members of Rome for One are Valerio Brinati, Matteo Miceli, Riccardo Capociuchi, Hugues Le Cardinal, Isidoro Santececca, Carlo Potestà, Alessandro Fiordiponti, Mario Girelli, Enzino Donadio, Giacomo Sabbatini, Pierpaolo Ballerini, Sergio Frattaruolo, Tullio Picciolin, Giancarlo Simeoli, Oscar Campagnola, Marzio Dotti, and Angelo Ciciriello.

In the “for 2,” they take to the water on the Class 40 TWT UCOMM. Marco Rodolfi and Matteo Auguadro, winners last year in the Adriatic of both the Cinquecento and Duecento for 2; also to keep an eye on the Germans from Many Years, a Pogo 40 helmed by Konrad Schwingenstein and Eric Baray and the Croatian crew consisting of. Damir Cargo and Miljenko Nikolic competing with the Pogo 40 Swaypoint. In the “for All” stand out among the 50-footers are Guido Paolo Gamucci’s Cookson 50 Cippa Lippa 8, Giulio Scarselli’s X-Yacht Kamomilla Blu, Lorenzo Zichichi’s Comet 51 Libera , and Maurizio Maggiorotti’s Grand Soleil Nibani . 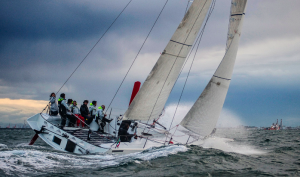 THE “CHICCA” IS KUKA-LIGHT
But the biggest attentions will be for the Swiss of Kuka-Light, which the owner, Franco Niggeler, built out of scale. Before explaining what boat Kuka Light is and what she looks like, it is only fitting to have Niggeler tell why he wanted to build her. “The idea came to me in 2009, when I realized that in order to improve the rating of my 42-foot cruising-racing boat (a Sly 42, ed.) with which I was competing in ORC and IRC offshore sailing championships, it was convenient for me to reduce the sail plan to make the boat go slower and thus obtain a tonnage certificate with a more favorable fee. An absurd thing, for me who is used to racing Class A catamarans and Melges 24s, where speed and apparent wind are synonymous with fun.” So, Niggeler did not want to give up having fun while looking for maximum performance and began to want a boat designed to tackle big offshore races such as the Middle Sea Race and the Fastnet that, however, could give him the same excitement he feels on the A-Class and Melges 24. Thus, a 42-footer that was as light as possible and took advantage of the apparent wind to maximize performance as much as possible. “I ignored all the handicap regulations!” says Franco Niggeler happily. 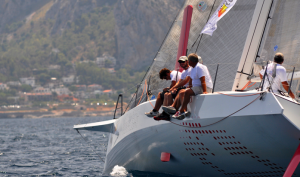 BUILT IN SIX PIECES
Kuka Light was designed by ST Yacht, by Dutchman Doug Schickler and Italian Davide Tagliapietra, with Sebastiano Rech Morassutti serving as project manager. was built in separate pieces (the two hull sides, bottom, deck, deckhouse, bow and stern) using carbon and honeycomb core with aramid fiber, made in an autoclave by the Swedish shipyard Marstrom (which is a leader precisely in the catamaran industry, from Class A to Tornados and Extreme 40s, to which Niggeler is very attached), which then shipped them to Soleri of Ravenna, which did the assembly. On par with maximum possible lightness, the basis of Kuka Light’s design philosophy is the pursuit of maximum power. For this, two basic solutions were chosen: the canting keel and the rotating mast sail plan like that of multihulls. The end result is a 42-footer that, proportionally, would be 15 percent lighter than the more sophisticated IMOCA 60 (the 18.28 boat class used by solo sailors for around-the-world racing), which has a rig derived from the Extreme 40s (the 12-meter catamarans) and a sail area equal to a Class 40 (the 12-meter monohulls intended for the ocean).