What will the weather be tomorrow? How to predict the weather yourself without the help of the internet 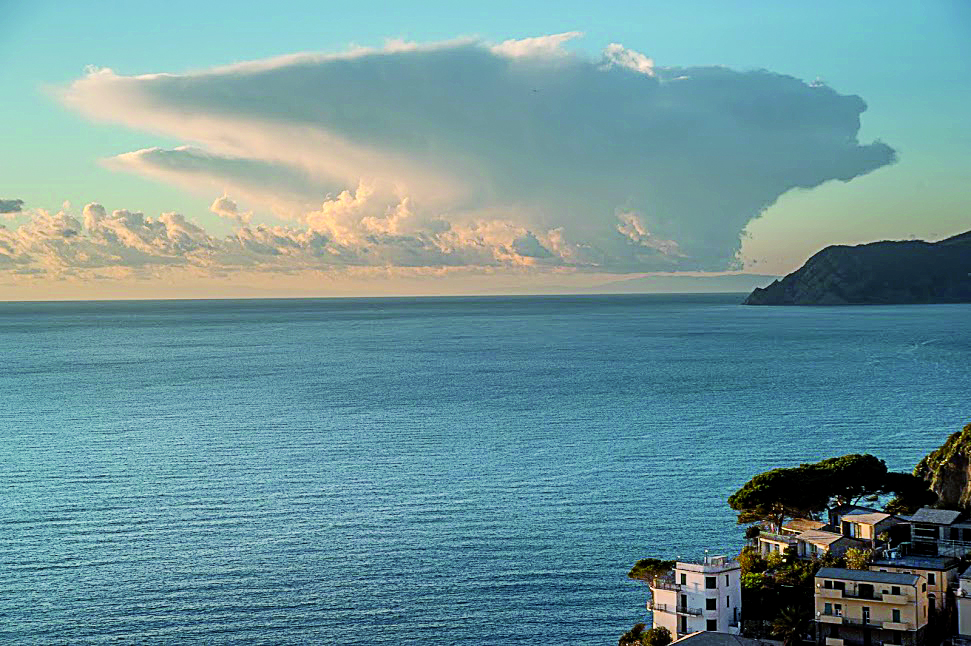 What will the weather be tomorrow? Take it as a game, not too far from reality. Imagine sailing next summer in the Mediterranean in an area where there is no radio signal and where it is impossible for you to connect to the Internet to check the weather forecast. You have with you a barometer and hygrometer on which to rely in addition to your skills in observing atmospheric phenomena. This is an ideal situation for you to realize how much fun it is to work out your own weather forecasts as well as proving to be a very useful skill to avoid having to deal with unpleasant weather situations to handle. Every self-respecting sailor must also be a meteorologist capable of navigating even without consulting online forecasts (which are not always reliable), which is why the purpose of this article will be to provide you with some useful tips for deducing, from some simple observations, whether or not a certain anchorage is safe to spend the night, whether the clouds you see on the horizon are an indication of good or bad weather, whether it is better to pass over or under an approaching disturbance by orienting yourself with data obtained from the barometer and hygrometer . 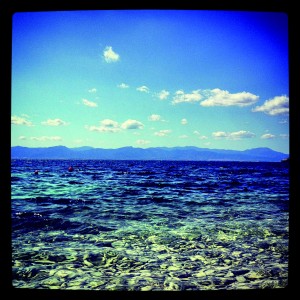 HOW TO READ CLOUDS
Cumulus humilis, fair-weather clouds, can help, depending on the hours they appear, to infer the degree of wind intensity. If these clouds form in the early morning, a stronger sea breeze can be expected than if they form in the warmer hours of the day. In addition, from their height you can get an indication of the day’s temperature: the warmer the temperature, the higher the cumulus will form. The passage of a cumulonimbus, on the other hand, should put you on alert, because it is always associated with strong, extremely variable winds. Suppose a large anvil cumulonimbus, the most dangerous one, is moving fast. Paradoxically, if you happen to encounter it, you have to keep in mind that the moving air behaves like a small anticyclonic zone, with the wind radiating out from its center, rotating slightly clockwise. It is the intensity of the phenomena that is completely different: frontally the cloud is always overpowered in its immediate vicinity by violent gusts, in its interior the falling wind can be even over Force 10 Beaufort, with the possibility of precipitation of large hailstones, as well as torrential rain. Best to avoid. Since it cannot help itself, it is best to go around it, carefully choosing the opposite side from the direction in which the storm is heading. Speaking of thunderstorms: by measuring the time between lightning and thunder, we can determine how soon the thunderstorm will arrive. Light is instantaneous while sound propagates at 340 m/s. 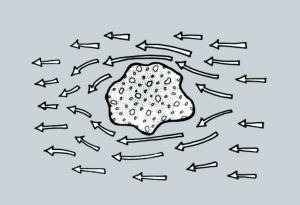 CLOSE TO AN ISLAND
The breezes that form around an island are important phenomena for navigation. During the day, warm air rises as a result of the warming of the ground, creating a convective motion that causes breezes coming toward the center of the island to converge toward the coast, as well as permanent clouds that make the island easy to spot even many kilometers away, before you can even see land (this was the sighting system of ancient navigators). The diagonal shift of the clouds over the island indicates the presence of synoptic wind (wind aloft), so this observation can help you decide which side of the island is best to anchor on to get a better ridge. The more the clouds are shifted up diagonally, the stronger the wind at altitude. It is also important to know that the island provides better ridge during the hottest hours of the day rather than at night: during the day, the sea breeze, always oriented toward the center of the island, will tend to add to the synoptic wind in the windward part, providing local reinforcements but will be in your way.

DISTURBANCES AND WINDS
The passage of a disturbance in the Mediterranean is characterized by counterclockwise rotating eddies composed of a warm front followed by a cold front. They move from west to east with a speed of more than 1000 km per day. This is what happens particularly in late spring or late summer. Incoming cirrus and cirrostratus from the west or northwest along with southerly winds and a descending barometer herald a warm front, the effects of which begin to be felt on land with rain, wind, and sea after 12-24 hours. Precipitation begins when the warm front (which we identify with clouds) passes into the nearest part as winds begin to rotate clockwise. Between the warm front and the next cold front, the wind strengthens to the west, the barometer begins to rise, and the temperature drops. The passage of the cold front is the worst time for those who are sailing: the wind from the northwest strengthens with very violent gusts, formed sea, decreasing temperature and precipitation. The depression has now passed, and the winds are turning northeast, decreasing in intensity and bringing clear skies. The temperature rises along with the barometer and the humidity decreases. This is what happens in a synthetic and idealized way and can be considered as a general rule. However, it should be remembered that each area may have its own particular premonitory signs and its own typical atmospheric evolution. 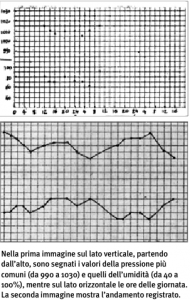 BAROMETER AND HYGROMETER
Everyone knows that when the barometer drops, bad weather is to be expected, but few are able to go beyond this general fact. Therefore, let us try to clarify the meaning expressed by the pressure and humidity measured on board by relating these two quantities to each other. In fact, it is mainly from how they change over the course of the day that we can tell if and how bad weather is coming. With some good will, it is easy to construct a trend graph yourself. By plotting the pressure and relative humidity values, read at regular intervals on the on-board instruments, on a sheet of paper, an easily interpretable graph is obtained (see image opposite). If the weather is stable, there is a pressure drop of 3-4 mbar toward evening, while relative humidity increases (90-95%) due to the decrease in temperature. The trend reverses over the course of the morning: the barometer rises a few mbar and the humidity falls. If the curves appear without obvious deformation, you have good weather in the next 12 to 24 hours. If, on the other hand, there is a rapid decrease in humidity and an increase in pressure, strong winds from the northern sectors are to be expected. Strong Sirocco winds are usually accompanied by fast rising humidity and falling pressure. The Libeccio shows similar premonitory signs to the Sirocco, with the variation of greater intensity and increased temperature. The general rule is that the magnitude of wind force is related much more to the rate at which pressure and humidity change than to the absolute value they reach.