What a “missile” Eilean! First in real time at the Regatta Napoleon, the story from our correspondent 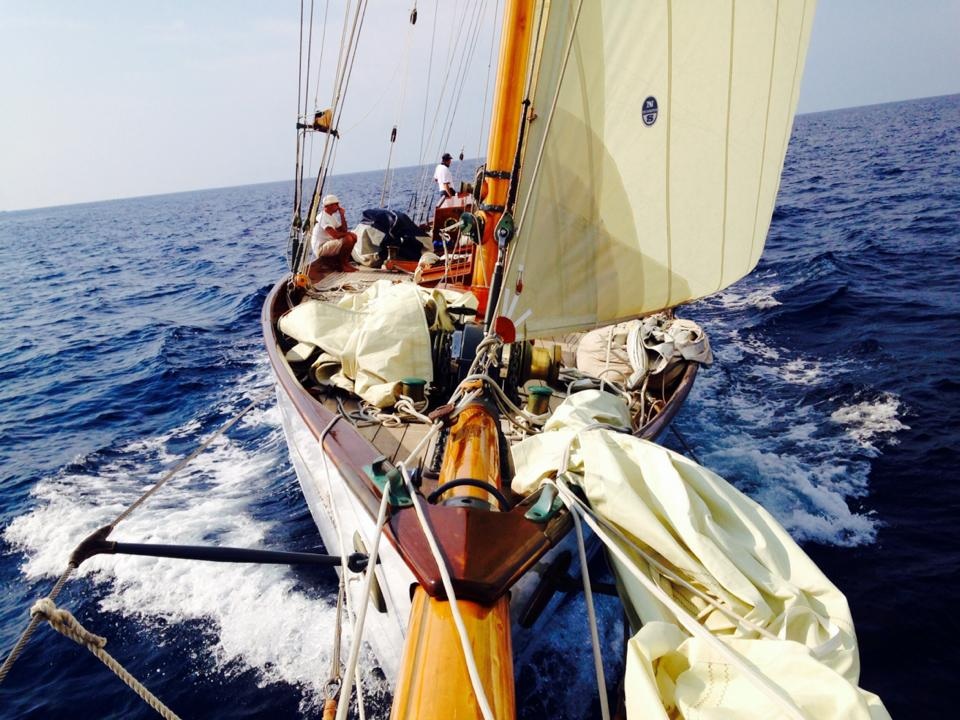 Friday – Thinking of a regatta aboard a modern boat and multiplying everything by at least three, we come close to what a regatta aboard a vintage boat is like. The combinations for the right sail plan trim are triple, as is the effort required to bring the boat along, triple also becomes the tactical effort to figure out, at least on a long run, what course to take based on the best sail plan, triple the attention required on board to avoid doing damage. But along with all of this comes a tripling of fascination, especially aboard a boat like Eilean, which, after enrapturing you at the dock, bewilders you with how magical it is at sea. The departure of the Napoleon Regatta from La Spezia is scheduled for 2 p.m. in front of the Tino. 74 miles to Portoferraio and which Eilean, according to his rating, must cover in less than 34 hours. This will be the first night race for the boat. After a brief breefing, we cast off our moorings, along with the other 13 boats almost all arriving from Antibes and heading to Argentario for the second leg of the Panerai Trophy. There are eight of us on board; in addition to Andrew, Eilean’s captain, there are four other crew members, two other journalists, and a professional British tactician named Frano who proved crucial in the race. Little wind awaits us, no more than five knots from the southwest and heading for 155 degrees (if the wind doesn’t turn, it’s a wide windward almost sideways), and as we motor up to the Tino, Andrew assigns each of us a role and divides us into two groups for night shifts, leaving us journalists free. 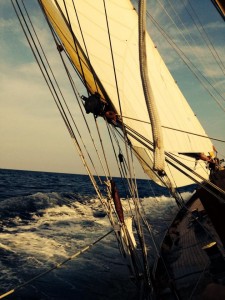 AT THE START WE ARE ALREADY AHEAD OF EVERYONE
“Rock’n’roll guys here we are, five minutes to the start”: we start ahead of everyone and Frano decides to take the shortest route even if not the one with the best pressure. Only now am I beginning to realize what it means to max out a boat like Eilean, which can rig up to five sails at a time. And a constant question of whether that choice is really the right combination of sails to push the boat to its maximum. We start with mizzen, mainsail, small foresail and birdie (going in order from stern to bow) and ready with carbonera and gennaker if the wind turns. As soon as the wind strengthens (about 10 knots) and turns, allowing us to rest a bit, we remove the small foresail to rig the larger one: the maneuver is as follows: we hoist the jib so as not to lose water we lower the small foresail, hoist the large one, and at that point we lower the jib. Simple isn’t it? Then Frano brightens up convinced that the boat has too little power and decides to rig the foresail just lowered as if it were the carbonera, in front of the mainsail. Maneuvering never tried before aboard Eilean but which immediately pays off allowing us to increase speed by 0.3 knots reaching 9.5 with the boat very balanced. As soon as the rudder becomes too hard, just leave a bit of mizzen to rebalance the trim. 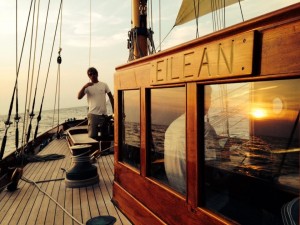 AN UNFORGETTABLE NIGHT: EILEAN RACES UNDER GENNAKER AND FULL MOON
The wind around 8 p.m. dropped along with the sun, and this gave me a chance to see the two sails I had been missing, the carbonara and gennaker, at the test (lowering of course the “new” foresail and bird). We fly, with the full moon showing us the course: the spectacle of Eilean running under gennaker and full moon leaves me speechless. At about three o’clock the wind leaves us less than fifteen miles from Portoferraio, the crew concentrates even harder not to lose first place, and at 6:05 we cross the finish line ahead of everyone and bidding good morning to Elba Island. We uncork a bottle of champagne around eight o’clock for breakfast while enjoying some well-deserved bacon eggs (cooked by the excellent Stephen) and wait for the results with compensated times: will the 15 minutes given to the second boat be enough?

Thursday – “Hi Veronica, I wanted to invite you to do a regatta aboard Eileen. Departure is Friday morning from La Spezia, arrival in Portoferraio Saturday morning. You will also sail at night. Are you interested?” Silence. “I’m interested??? Of course I’m interested, Eilean is one of the most beautiful vintage boats in the world.” 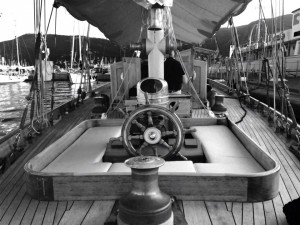 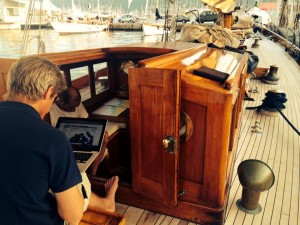 And so from this morning and for three days, I will be part of the crew of this legendary boat, with which from La Spezia we will reach the island of Elba, participating in the “Regatta Napoleon” organized by the AIVE (Italian Vintage Sails Association) on the occasion of the 200th anniversary of Napoleon’s exile to the island of Elba. Last night when I came aboard to greet me were Andrew, the boat captain, Roberta and Stefano, two crew members, we had dinner together, an excellent pasta with squid welcome. I promise, every day, a small report and photographs. Stay tuned! 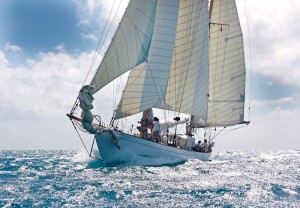 THE STORY OF EILEAN, CLASS OF 1936
The boat, a 22-meter Bermudian ketch class of 1936, is named Eilean, which means “little island” in Scottish, and is Fife Shipyard project number 822, designed by William Fife III for the Fulton brothers of Greenrock. It was built to allow shipowners to cross the arm of the sea that separated living and working. After a succession of owners, more or less famous, in the 1970s it ended up in the hands of English architect John Shearer who decided to live there and organize charters in the Caribbean. The boat sailed a lot, counting as many as 36 Atlantic crossings, and in the 1980s became to be chosen by Duran Duran for the video clip of the song Rio. In the 1990s the boat began a difficult first restoration in Antigua following an accident in Malaga harbor that had seriously compromised its structure. the English architect attempted on his own to put it back together, but, having ended up in a state of financial straits, he left the boat in Antigua in a state of semi-abandonment until 2006, when it was spotted during Antigua Classic Week by Officine Panerai CEO Angelo Bonati, who was fascinated by it and decided to undertake the meticulous restoration at the Del Carlo shipyards in Viareggio, which in 2009 put it back in the water after three years of work and the recovery of almost all the original planking.