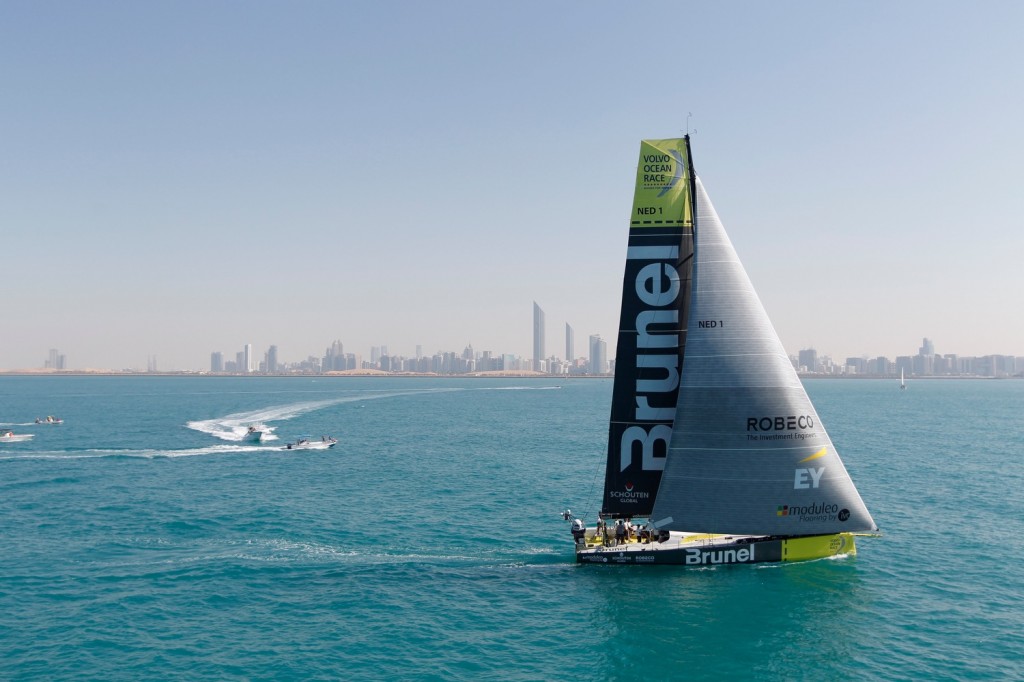 ONLY 16 MINUTES ON DONGFENG
After 23 days, 16 hours, 25 minutes and 20 seconds of sailing, with the passage of the Cape of Good Hope, the ascent of the Indian Ocean, the passage of the equatorial calms, the busy and treacherous Strait of Hormuz, always in close contact with its rivals, Team Brunel crossed the finish line in Abu Dhabi by the narrow margin of 16 minutes and 20 seconds over Dongfeng Race Team with which it has shared the lead in recent days and which it passed only tonight, five hours before the finish. 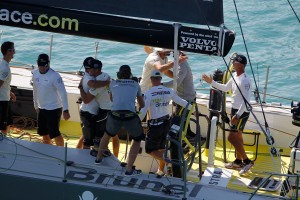 “WE WERE GOOD.”
Skipper Bouwe Bekking, 51, who took part in his first Whitbread Round the World Race back in 1985, with his typical open smile as soon as he arrived at the dock in Abu Dhabi said, “It’s a good feeling. I’ve always said it’s better to be lucky than good, but in this case we were good, we sailed well, in a leg like that we could have even finished last. It’s good to put a win in the pocket, my crew worked very well, better than in the first leg. And this is the best aspect.” The Dutch sailor, when asked how the ride has changed with the adoption of one-design boats responded by saying, “A lot of work has to be done. In the past maybe you could relax a little bit if you had a fast boat, but now you have to push hard, all the time. If you make a mistake, someone is sure to take advantage of it. It’s something that puts pressure on, especially young people, who sometimes put up with losing a position or two badly. But my guys did an incredible job, even on this stage.” 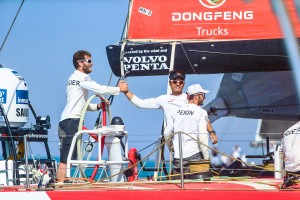 FRANCO/CHINESE, ETERNAL SECONDS
Bouwe Bekking and his equally experienced Australian navigator Andrew Cape, who together add up to 11 round-the-world sailing crew appearances, used their know-how and cold blood to bring the final attack to Dongfeng Race Team, which thus had to “settle” for second place. The French/Chinese crew, which had already finished second in Cape Town only 12 minutes behind Abu Dhabi Ocean Racing, was this time 16 minutes behind, a decidedly incredible gap after more than three weeks of racing. The transalpine skipper, in an earlier video link had expressed a few words of disappointment, soon replaced by a more positive statement. “We are a little disappointed because we always want to improve, but it is a good placing. We showed that we can compete with the best and we are proud of that. We are happy, it’s always nice to finish a long stage like this. If they had told me we would finish second at the beginning I would have signed up right away, but after what happened it’s a little hard to swallow. We’re actually a little bit sorry. Brunel found a flurry and passed us. But second is a good result.” 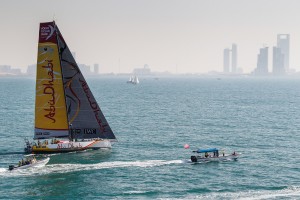 THIRD THE ARABS
Abu Dhabi Ocean Racing, crossed the “home” finish line with Emirati sailor Adil Khalid at the helm at 12:08:15 p.m. (Italian time) and was greeted by a large local crowd. Skipper Ian Walker, in a link from the sea minutes before arrival said, “It was another relatively easy leg, with light wind, but very long. And always in contact with opponents. I would be lying to you if I said I did not feel like setting foot on the ground.” Asked how he was experiencing this third-place finish, the British Olympian said, “We are experiencing mixed feelings, actually, two days ago we were ahead of Dongfeng and last night we were back under the top two, but not close enough to catch up and pass them. The last few days have been quite intense. We are third though, a first and a third in the first two legs is not bad at all, the guys are in good shape, the boat has no problems. Of course we would have liked to win this stage, but it was long and a lot could have happened. Standing on the podium is a good enough reason for a smile.”

BETWEEN TONIGHT AND TOMORROW THE OTHER ARRIVALS
The Spaniards of MAPFRE and Team Alvimedica, with the only Italian in the race Alberto Bolzan, due to light and decidedly unpredictable winds in the last few miles, could reach the emirate late tonight or tomorrow morning while the women’s crew of SCA is expected to finish in the day tomorrow.