Volvo Ocean Race, starting in November: what are the teams up to?

The Volvo Ocean Race 2014/15 starts in November. The five teams (Alvimedica, Abu Dhabi, SCA, Dongfeng and Brunel) are preparing for one of the most demanding challenges in sailing history. Let’s see, crew by crew, how they are doing. 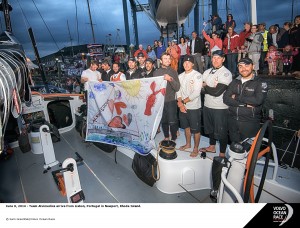 TEAM ALVIMEDICA
We are less than a year away from the arrival of the 2014/15 Volvo Ocean Race in one of the recognized capitals of world sailing, but the city of Newport in the North American state of Rhode Island is already full of passion and expectation, judging by the warm embrace it has reserved for Team Alvimedica. Last Monday, the town participated in droves, despite less than clement weather, with many boats going out to greet the “home boys” led by skipper and fellow citizen, Charlie Enright. The young crew of Team Alvimedica, including several international trial sailors, thus completed the Atlantic crossing in 10 days with the invaluable support of some Volvo Ocean Race veterans such as Stu Bannatyne, who has taken part six times. “We couldn’t have hoped for better on a rainy evening.It was great to see so many people welcoming us, “Charlie Enright said about the welcome. “After ten days at sea, arriving in Newport is an amazing thing.” The city will be a stage venue for the 12th edition of the World Tour in May 2015. The Atlantic crossing marked an important moment for the crew. “It was a big step forward for Team Alvimedica,” Enright said. “We have always had very good conditions, we are happy with what we have done and eager to continue with the work. Now we have more training ahead of us before returning to Europe in July.” Twenty-nine-year-old Enright and his co-equipier Mark Towill, 25, sailed along with the rest of the crew in “regatta mode” in order to put the pre-selected young sailors through their paces and to test ocean sailing technique to the fullest. Also on board was 32-year-old Alberto Bolzan from Friuli, who upon arrival said he was extremely satisfied with the experience, both sporting and human. 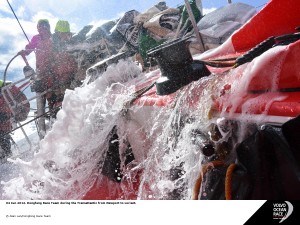 DONGFENG RACE TEAM
Another team that is making strides to close the experience gap is Dongfeng Race Team which is planning to include three young Chinese sailors in the starting crew, whose final composition will be announced in Lorient, Brittany, on June 26. Certainly the team does not lack specific racing know-how, as French skipper Charles Caudrelier helped Franck Cammas’ Groupama win last year’s edition. Having sailed more than 10,000 miles, including the Atlantic crossing that ended just this week, Caudrelier believes his team is taking excellent shape, including the Chinese suitors. In fact, the skipper said that the team has now brilliantly passed a “key point” of preparation, and was pleased with the talent he could see among both Western and Chinese sailors. 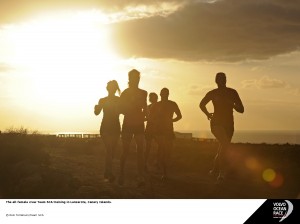 TEAM SCA
Meanwhile, Team SCA sailors are taking a break in sea training after completing two Atlantic crossings. The team members left Lanzarote, but with a strict physical preparation plan to help them “keep moving, relax, get back into their daily routines and resume normal biorhythms” as their athletic trainer and physical therapist Santi Casanova explained. 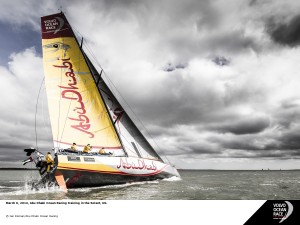 ABU DHABI
The Abu Dhabi Ocean Racing crew is also taking some time off from their base in Cascais, near the Portuguese capital Lisbon. Next on their schedule is the Atlantic crossing from Portugal to Newport, scheduled for the end of June. Azzam, will then be back in Europe in time to attend Cowes Week, where the official naming ceremony will also be held on August 6.

TEAM BRUNEL
Interest in the Volvo Ocean Race also continues to grow in the Netherlands, where Team Brunel is increasingly committed to building the future of a sport already beloved by the Dutch. While the sailors in the crew led by veteran Bouwe Bekking are enjoying a few days at home, a start-up sailing project has been launched involving more than 4,000 Dutch school students who have received a miniature model of the Volvo Ocean 65. The children, who will also be given a special notebook for each leg of the regatta, will study biology, geography, life on board and the technological aspects of ocean navigation during the round-the-world race.

PrevPreviousThe Brindisi-Corfu is confirmed as queen of the southern Adriatic.
NextRegattas, what a passion. June’s “must-do” appointmentsNext
In evidenza