Vittorio Malingri: “This is how I weathered the storm.” 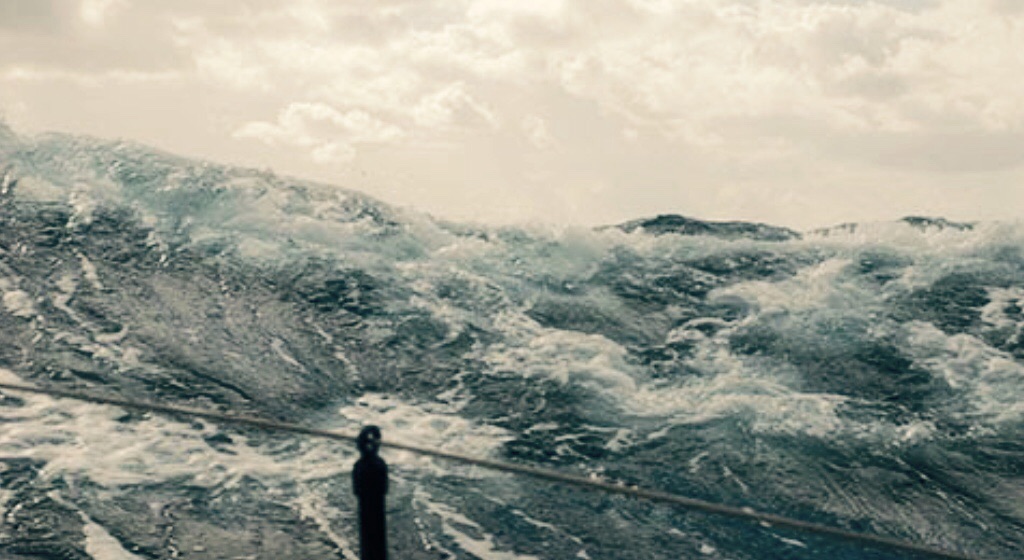 Vittorio Malingri, with his ocean sailing school “Ocean Experience,” is currently sailing in Central America. And what a navigation! Time of Wonder is his latest love: it is a schooner-fisherman whose design is more than a century old (it was used for fishing on the Grand Banks, a Pinky Schooner 45 (Vittorio’s boat, however, is from 1975).

A great navigator like him has seen it all. Hence, the tale of the storm from which he just emerged in La Romana, Dominican Republic, aboard the old two-masted “Time of Wonder,” is certainly not the result of exaggeration. 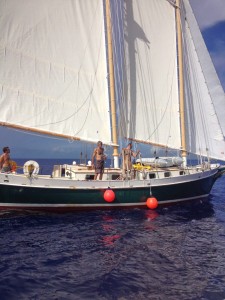 THE DOLDRUMS AND ALTERNATOR PROBLEMS.
From Vittorio Malingri’s blog: “Sorry for the interruption of a few days, as you read you will understand why. In two words, we can say that: the second part of the crossing, from the center of the anticyclone down, instead of being the “downhill” one turned out to be the “uphill” one. We were left on Oct. 30 with little wind, a hundred miles SW of Bermuda that we would “peel off” to pick up an incoming NW headwind that would quickly bring us to our destination giving us the tropical part of sailing in the trade winds of the American anticyclone. I forgot to mention that in the long demotor we had alternator problems. Every now and then it would stop charging, and I, by touching various wires, always managed to get it working. Then we had a drop in engine revs and changed the tank thinking we ran out of fuel. After half an hour, the engine died, even though the new tank was full to the brim.

We have two iron tanks, one of which has been recently repaired, all beautifully painted in epoxy that overall inspires so much confidence. Like hell! something keeps obstructing the draft, and there is no way to access it without disassembling half a cockpit. To make a long story short, that other one was also clogged but this time with rust. I blew in both naphtha lines first with lungs and then with the dinghy pump, and plumbed them out. But while the left one resumed passing diesel fuel smoothly, and I only needed to fill and empty the decanter filter 3-4 times to get rid of the rusty bottom, the starboard tank’s suction cup instantly retaped. There was naphtha in both tanks plus two reserve jerry cans, and so I superseded thinking, if need be, to continue filling the port tank with the jerry cans and then sucking with a hose from the embarkation emptying the starboard tank.

The bottom of the cockpit is also the access hatch to the engine room. It’s nice and heavy, I tip it back toward the bow by leaning it against the benches. Stupidly, I don’t insure it, thinking of roll and not pitch. At one cetus point while everything was spinning beautifully from the naphtha and tank profile and I was looking contentedly at the stars wiping my hands, I took it in the forehead sharply. As luck would have it, the hardware that closes it, and would have split my skull in two, was only two inches to the right, and I-it would seem-I am also hard-headed, and not just metaphorically. Happily, I held my own and did not fall on the running engine and moving propeller shaft.
It went well!

COMES THE WIND…
On the 31st the wind came up in the afternoon, by evening we were flying on the slack with all sails on shore and an increasingly uncrossed sea. In the night we gave two coats and then removed the entire mainsail. Around dawn on November 1, I reefed the mainsail by myself. There were 30 knots, and the boat, under foresail and yankee nice “pulled from the nose,” was doing very well. I have extolled the gifts of Time of Wonder, but of course there are downsides as well. The “cod fishermen” were smart people, and if they had the materials and technique that we have today they would have gone fishing with a Class 40 cargo boat or an Open in general, which remain the absolute most marine and rugged of all boats.

LONG-KEEL LOVERS, YOU HAVEN’T UNDERSTOOD A C…
To the lovers and supporters of the long keel I can calmly say, “You don’t understand shit,” you are nostalgics and theorists. It is a good thing to go straight, end of benefits. But sometimes it also happens that you have to turn the boats around…. and sometimes it happens that you have to turn them “on a dime,” maybe before you get disintegrated by a breaker. 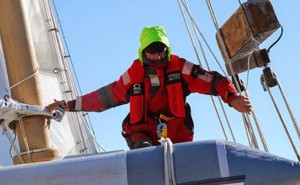 ALL SAIL TO RUN THE BOAT IN FRONT OF THE SEA
Anyway back to us. The wind settled at 35 knots, gusting to 40, with breaking waves of 5-6 meters. The tiller of the rudder in spruce, counteracting the strains with each wave, twisted to unimaginable levels. While for hours I fielded all my experience and skill as a strong-wind coxswain, I occupied my brain thinking up systems to replace it once it would break, because it was clear that it would break. Fortunately, Andrea, who takes over from me at 4 a.m., is a decent helmsman and had no problems for half of his shift. At dawn there were 40 knots and 6 meters of breaking wave. Hearing the boat moving strangely, I woke up, got out, and we first lowered the yankee, then the mainsail.

But the foresail alone was too little to go fast (mindful of Vito Dumas “in such cases all sail to make the boat run before the sea. “Polecock,” the ancestor of the gennaker, “and mizzen”). So up the yankee again. The bad part was the two walks to the bottom of the 4-meter bowsprit, with no spreaders or net underneath, to first tie the yank and then untie it again. It goes without saying that in all of this we have our vests and seatbelts glued on. With only flakes ashore throughout the day, the rut did not change, except for a clockwise wind rotation that shifted fairly quickly from NW to NE, reintroducing a very cross sea.

LIKE SERGEANT HARTMANN FROM FULL METAL JACKET
Roberto has more limited experience and, some happens to many, rightly has great concern and knowledge of his limitations. However, this blocks people and prevents them from focusing on what they are doing, creating insecurity. With a tried-and-true recipe of mine, based first on cursing, then on shouting insults inches from my face, in the perfect style of my idol: Sgt. Hartmann from Full Metal Jacket, I took it apart and put it back together psychologically in an hour or so. I prevented him from passing hands by telling him that until he learned he would remain glued to the helm. If he had caused damage and accidents-and we had come out alive-my curse would have haunted him for years. I remember at one point I told him that always until he learned he would be nailed there without drinking and eating, and at the climax I even told him that when he learned I would make him fuck my sister. Under insults and threats shouted by a madman with a cut on his forehead, in the midst of Chinese jibes and jibes in the midst of a very serious storm, within an hour or so he learned. The next day, however, in a debriefing about the situation, he asked me, “But do you have a sister?” and I looked away, “No. I don’t have a sister.” And Roberto grumbled, “I knew you didn’t have a sister,” and I retorted, “I have cousins, though!”

FEAR FOR THE RUDDER
Throughout the night the wind continued to increase and turn. On my turn, when the first light of day appeared, I began to be really afraid that the rudder would break. The boat no, it is a rock. Glides over 10-12 knots for sure; in one–on an abnormal wave train–I saw the boat descending at 45 degrees with the bowsprit already all the way in the wave hollow and the bow remaining on the water surface by a miracle. I started helming by looking behind and no longer in front. I started to stop using the comb to lock the bar at the desired angle, but to always hold it with my arms by yielding on purpose at the times of greatest stress, on the overstrain, so as to relieve the strain and keep it from breaking. I have come up with all the modifications to make the tiller, as soon as possible, more solid and the boat less nettlesome in general.

I fell in love with this boat and I’m not letting go of it. I think I will continue to sail with her, strong on a few tricks and profanities to the address of long keel lovers; whenever it should serve to motivate me and pull a new dawn. At one point a breaker took away a bench seat that is at the end of the aft bunk. There is nothing that makes me go berserk more than someone or something, other than me, causing damage to my craft. Despite my ire, I continued to have a healthy fear until the sea softened and the wind dropped slightly. And there, finally, I passed the rod to Andrea and collapsed….

VEAL CHOP DINNER
By evening we still had wind, turned now to the crosswind and much less. Reissued the mainsails, all the foremast one and also the mainmast one then re-trimmed with two hands. We flew through the night in a sky that slowly cleared and even showed a few stars. Dinner of veal chops and sautéed potatoes. Souls recovering. Silence, thinking back. Silence, contemplating a schooner launched into the night in the middle of the North Atlantic Ocean… a tough nut to crack this season.

WHO VITTORIO IS
One of Italy’s leading sailors, for over forty years in sailing as a designer, builder and ocean navigator. First Italian to participate in Vendée Globe, the solo round-the-world race without stages and assistance. Seafaring master and inspiration for generations of adventure and ocean sailing enthusiasts. Still on the “piece.”